Countless forms of experimental music took place communally in the sixties, but much of that music eludes our histories of American experimentalism. Many groups didn’t produce scores or recordings or even hold formal events or concerts; many people didn’t assemble officially as “groups.” When we do reflect upon communal experimental music, we might recall well-known ensembles like the Theater of Eternal Music/Dream Syndicate and the Sonic Arts Union, or slightly less-known groups like USCO and Group 212. These ensembles were communal to different degrees and at various stages of music making—from the collaborative creation of works to each individual’s prominence within an ensemble to the eventual ownership of compositions and recordings. One collaborative group that sought to both live their lives and make their music communally was the collective Pulsa. As a group dedicated to exploring “perceptible wave energies” through light and sound, Pulsa created art and music that not only made group collaborations audible and palpable, but they also reminded their audiences and participants—through light and sound—that actions have effects. 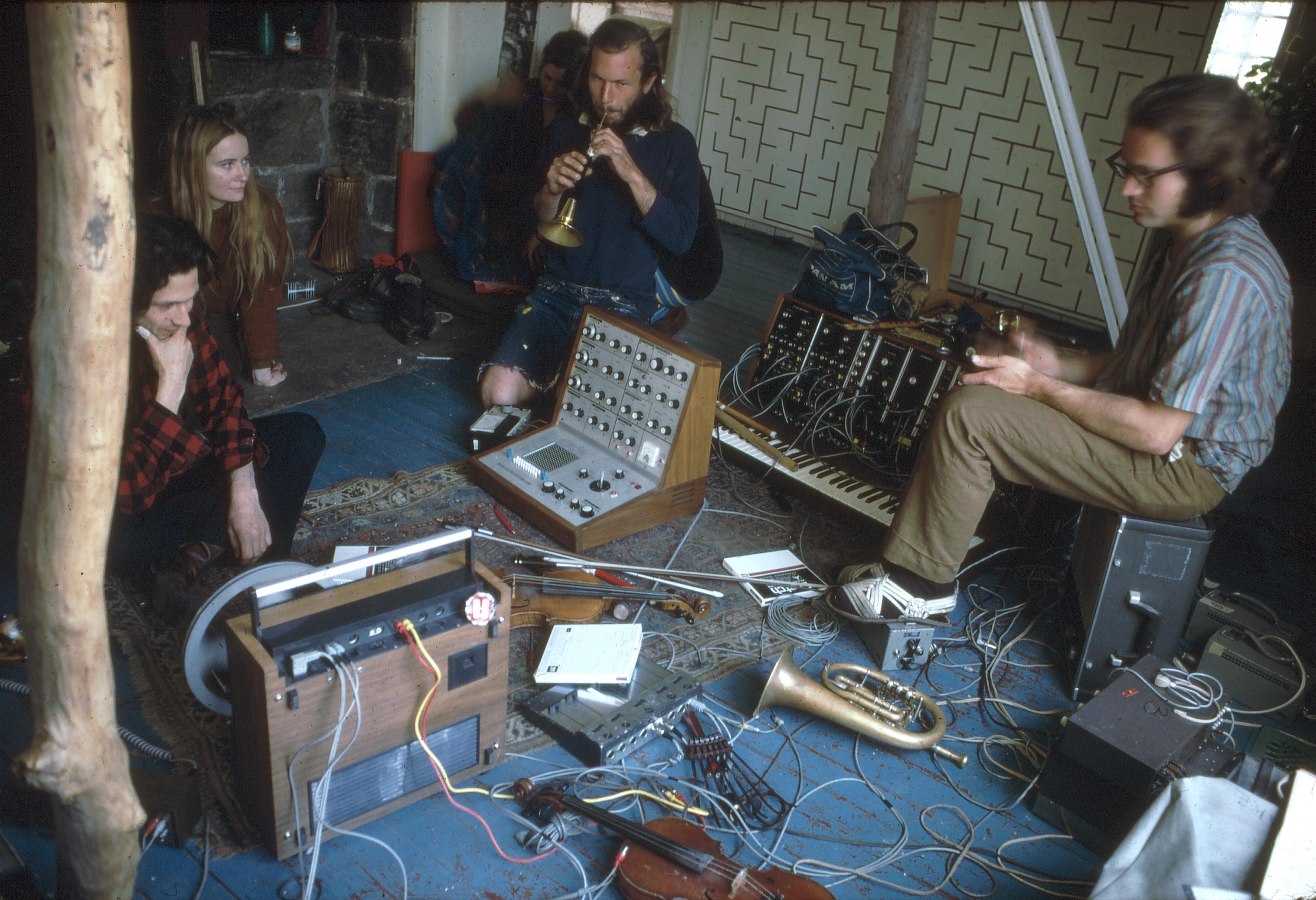 Pulsa participated in a massive communalist movement in the United States. Between 1967 and 1970, tens of thousands of Americans turned away from outward political action and went “back to the land,” joining what historian Fred Turner has called the “New Communalist” movement. Unlike the more explicitly political New Left, many of these New Communalists believed that the revolution wasn’t outwardly political but inwardly transformative—a revolution attained through interpersonal relationships and experiments with consciousness. Although many who joined communes eschewed electronics and large-scale technologies, a certain strand of this movement embraced small-scale tech like strobe lights, amplifiers, and slide projectors, along with bodily technologies like yoga, meditation, and hallucinogens. Pulsa was thoroughly plugged into this techno-powered back-to-the-land movement.

Pulsa was thoroughly plugged into this techno-powered back-to-the-land movement.

The Whole Earth Catalog—called by Todd Gitlin a “Sears catalog” for the sixties counterculture—is an eclectic artifact of the time period. This catalog incorporated, among hundreds of other things, pamphlets on how to build a teepee, a yurt, or a geodesic dome; tips on organic farming, mountaineering, and hitchhiking—practical information for going “back to the land.” But the catalog also included blurbs about books on cybernetics and early systems theory; advertisements for tape recorders, Moog synthesizers, and John Cage’s most recent books Silence and A Year from Monday. The catalog also featured an ad for the art and science organization Experiments in Art and Technology (E.A.T.), of which Pulsa formed the New Haven E.A.T. Local Chapter.

Founded in 1966 and active through 1973, Pulsa was an experimental collective based in Oxford, Connecticut. The group consisted of 7-10 people working in various disciplines, including painting, architecture, film, music, electronic engineering, psychology, mathematics, and computer programming. They lived together communally on a property called Harmony Ranch, and they also organized events at a downtown New Haven loft where, over the years, they hosted La Monte Young, Steve Reich, James Tenney, Terry Riley, Maryanne Amacher, Serge Tcherepnin, Richard Teitelbaum, and many others.*

In their essay “Notes on Group Process,” Pulsa—who always published collectively—described their central objective as developing “techniques for controlling perceptible wave energies.” Despite the varying specializations of its members, Pulsa aimed for each individual to be familiar with every dimension of a project to allow for the “complete interchangeability of roles.” By 1969, Pulsa was collaborating with a neuro-physiologist, attempting to model their working processes on the parallel processes of the human brain, which was “capable of simultaneously performing a variety of interactive operations.”

Pulsa described gardening as equal in significance to their more public projects and further emphasized the symbiotic relationship between their creative and agricultural work.

In working with wave energies, part of Pulsa’s work dealt with often invisible or inaudible materials like heat, sound, and light. For instance, in early 1970, Pulsa held an installation in New York City at the Museum of Modern Art’s Outdoor Sculpture Garden. In the MoMA garden, Pulsa aimed to gather “environmental information,” including sound, light, movement, and heat, using microphones, infrared sensors, and photocells. They then fed that information back into the garden using strobe lights, infrared heaters, and loudspeakers. Pulsa’s installation persisted 24 hours a day for two months, in the winter of early 1970, so even in the middle of the night, a strong gust of wind, the headlights of a passing car, or falling snow would trigger a response within the garden. And since Pulsa’s MoMA garden was receptive to heat, the mere presence of a body walking through the garden would be detected by infrared sensors and responded to with strobe lights and loudspeakers. 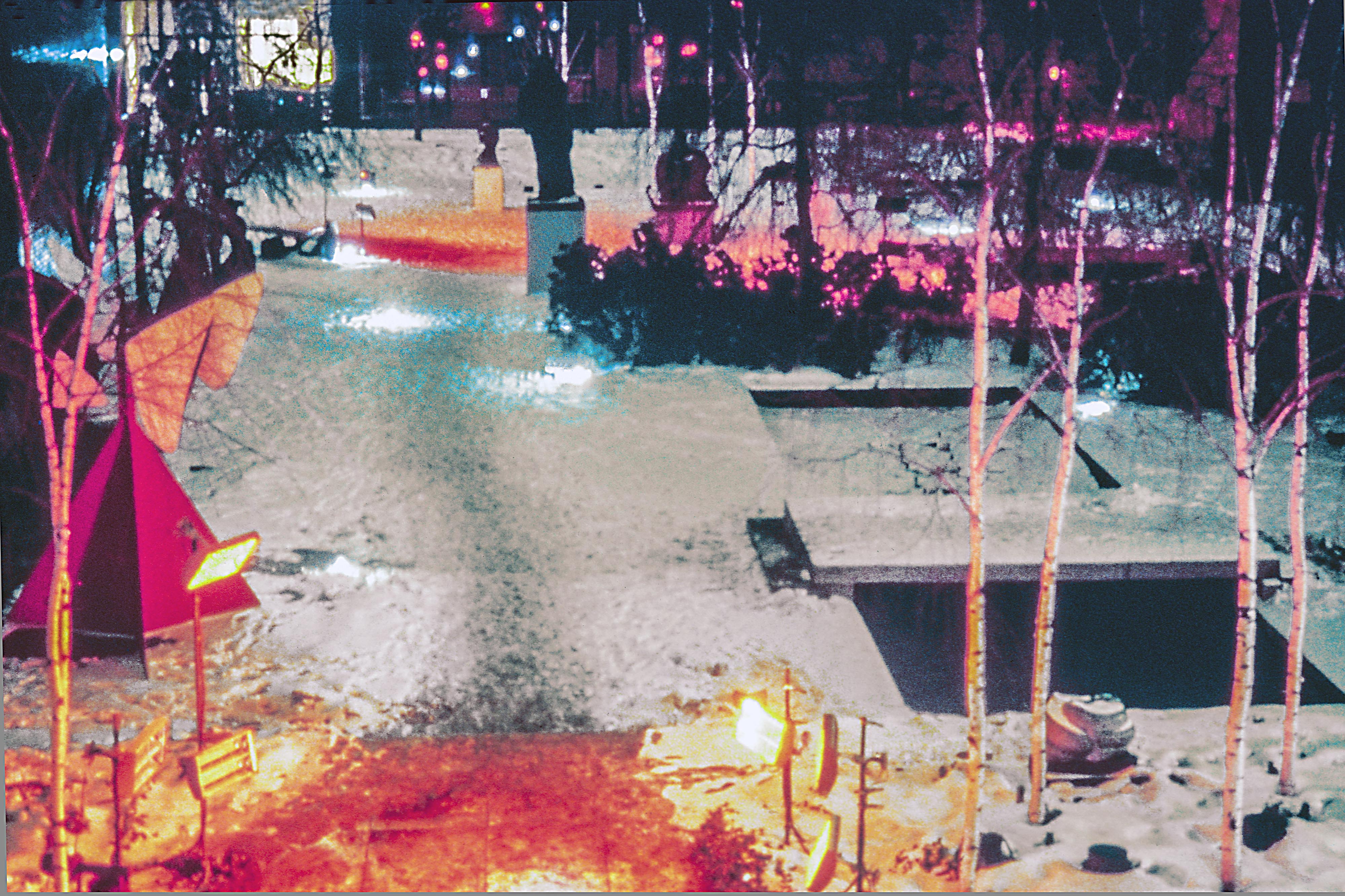 Beyond their larger installations, the majority of Pulsa’s work took place at their commune, where they could experiment with wave energies in everyday life, including tending to their farm at Harmony Ranch. In an essay from György Kepes’s collection Arts of the Environment, Pulsa described gardening as equal in significance to their more public projects and further emphasized the symbiotic relationship between their creative and agricultural work.

We grow many kinds of vegetables organically on the farm. Out of a half-acre garden we grew enough vegetables to feed ourselves, supply our neighbors, and barter with organic food stores. Agriculture provides information about long-term growth rhythms and is comparable in scale and as an energy to Pulsa’s other art works.

One of Pulsa’s main investigations with wave energies was conducted through brainwave experiments. In these experiments, participants would attach electrodes to their forehead and receive sound or light feedback when they achieved a certain frequency, most often an alpha state (around 8 to 12 Hz). Energies like brainwaves typically go undetected in day-to-day life, but by transducing it into sound and light, people could hear and see these energies. Such experiments, though, were not concerts or even formal events; they took place most often gathered around a circle at Harmony Ranch. 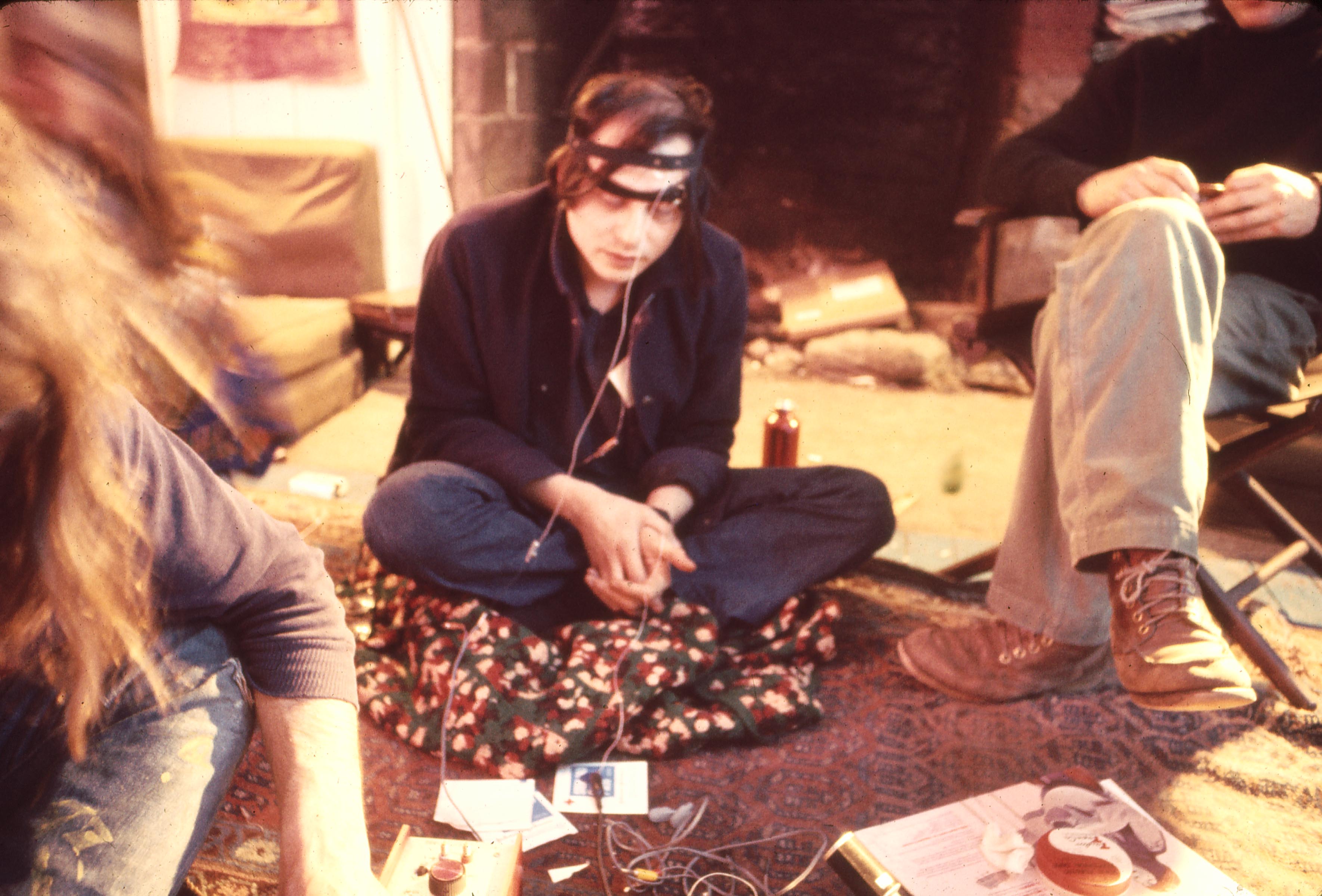 Pulsa’s experiments worked towards making wave energies more tangible and served as a reminder that when you make music—let alone move or breath or plant a garden—you affect the world around you. Although Pulsa’s example is perhaps an extreme one, it’s also a useful one. Pulsa’s work attested to the myriad ways that human beings are entangled—with each other and with environments—and you can hear this involvement; you can hear community through sound. Pulsa created a musical community that privileged not just the people within it but the sound and energy that sustained them.

* Members of Pulsa have uploaded numerous documents, including photos, event reviews, programs, and essays to achive.org. 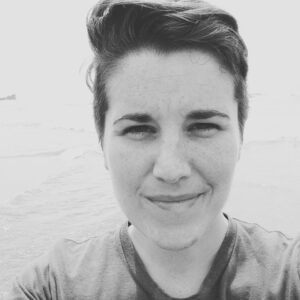 Kerry O’Brien is a Ph.D. candidate in musicology at Indiana University and a percussionist with Nief-Norf. Her current research examines postwar experimentalism, media studies, and countercultural spirituality. O’Brien lives in Seattle where she is finishing a dissertation titled “Wireless Experimentalism: Experiments in Art and Technology (E.A.T.), 1966-1971.” Her work has been supported by grants from the Presser Foundation, the Getty Research Institute, the Paul Sacher Foundation, and an American Fellowship from the American Association of University Women.