A performer friend and I were recently daydreaming about new possibilities for music commissioning—of chamber music, in particular. What if commissioning music were more a part of everyday life? 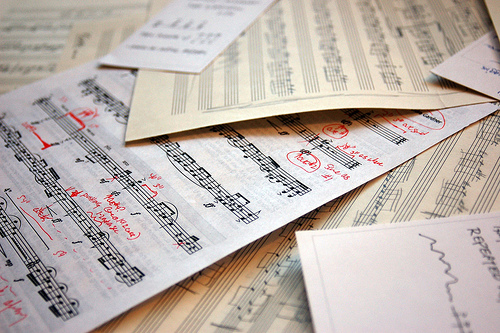 A “pile” of notes from electric blue pantsuit for violin and electronics.

A performer friend and I were recently daydreaming about new possibilities for music commissioning—of chamber music, in particular. She gets frustrated with the long waits involved in seeking grant support for commissioning fees; planning as much as two or three years in advance for something that may or may not actually come through. While I know quite a few composers who have organized consortia of instrumentalists who all chip in money to fund a commission, I always feel slightly uncomfortable about the idea of asking performers to pay for a new piece, when it seems like they should be receiving a fee (and a good fee, to boot) to perform a new work (or any work, for that matter).

My performer friend talked about how great it would be if commissioning music were more a part of everyday life. For instance, if a person commissioned a chamber work as a birthday gift to a partner, or if a community group commissioned a piece as part of an event. While this certainly does happen, it’s not nearly as frequent an occurrence as commissioning a work of visual art, which is fairly commonplace in some circles. What if it became perfectly normal for the tax accountants of wealthy people to say, “You need to rack up a few more beefy expenses this year. How about commissioning some music? Here’s a list of organizations that can help you do that. Go for it!” Or, as my colleague Molly Sheridan has suggested, given that most people of any social stratum have no idea how to go about commissioning a piece of music (the actual piece as opposed to a recording) or other work of art, what about something along the lines of Etsy.com for composers and musicians?

Like I said, daydreaming. In a way, I understand why these scenarios are not realities. People like stuff. Stuff that can be touched, held, hung on a wall, enjoyed by passers by. I like stuff, too. Although in my world music very much counts as “stuff,” the reality is that music is constructed of air and imagination. As physical as it may seem, music can never be touched. However, a physical recording can be touched, as can a score. When Joanne Hubbard Cossa retired from the American Music Center, as a gift she received a box full of notes and score snippets from many of the composers who had been supported by AMC over the years. That was an amazing gift; beautiful, personal, and so interesting. Not exactly music, but the stuff of music.

I wonder if commissioning music would become a more widely accepted activity if, in addition to the music, there was a bit of stuff involved? An autographed score might come with a commission as a matter of course, possibly with a recording at some point, but what if the composer also included some of her or his own earlier scribblings and notes? I realize that in-process twiddlings can be very personal and many composers don’t care to share them, but that material is also something that people outside the process really like; it helps them understand a little bit of how the music comes together. One of the reasons I try to document a bit of the composing process through photos of my music “piles” is because it can provide a little something physical to associate with all of that air. People seem to genuinely enjoy it, and it also serves to gently coax listening in to the actual music.
The biggest question is, of course, how to reach the people who would partake in the commissioning process. Are there any tax accountants out there reading? It’s time to start planting seeds… lots of seeds.