CLOTS at the Museum of Human Achievement in Austin

Created by composer and percussionist Nick Hennies, electro-acoustic musician/visual artist Sean O’Neill, and designer/UT lecturer Clay Odom, CLOTS is performed in a museum-like environment in which the audience members can move throughout the space and spend whatever amount of time they like experiencing the art.

Though clouded in some locational mystery, I finally found myself in the Museum of Human Achievement (mentioned previously here) thanks to composer and percussionist Nick Hennies’s latest project CLOTS. The museum keeps a bit of a low profile, but I can tell you that it’s in a warehouse on the east side of Austin. Finding your way there is apparently enough of a check of your bona fides that, once you arrive for a show, you are given the option of becoming a museum member. If you choose to join, you can select from a few dozen handmade membership cards which are then further customized with your name, the day’s date, and your member number. Given that areas like the once fun, funky, and occasionally unpredictable south Lamar are now populated by row upon row of condos, it’s really nice to find a place that is the antithesis of the “Times Square Disneyfication” that is creeping through town. 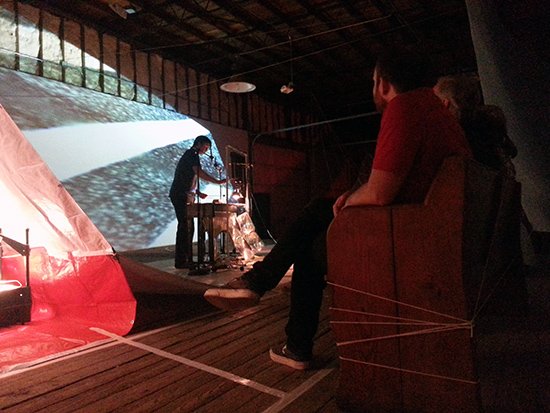 CLOTS, created over a four-year period in collaboration with electro-acoustic musician/visual artist Sean O’Neill and designer/UT lecturer Clay Odom, was conceived as a “large scale interdisciplinary work that parasitically engages and encompasses the entire space of the venue.” The work was presented at the MHA as part of a week-long series of shows curated by Hennies and bookended by the CLOTS performances. Hennies et al. hoped to create a museum-like environment in which the audience members could move through the space and spend whatever amount of time they liked experiencing the art.

I attended the final performance of the week and, arriving a bit early, had a few minutes to survey the venue. Situated throughout the space were colonies of overhead projectors, some with their lamps pointed up to shine through thick translucent plastic sheeting, others projecting images onto the plastic. The sheeting was attached by guy-lines to the ceiling on the left side of the room, then fell across the floor of the stage, and rose again at a forty-five-degree angle on the right side of the stage, climbing over the entrance and terminating at the ceiling. Underneath and to the right of the rising plastic near the entrance was the first projector colony and to the left was an area featuring a lone kick drum tented by another hanging sheet. There was room for the audience to maneuver fully around all the created spaces. 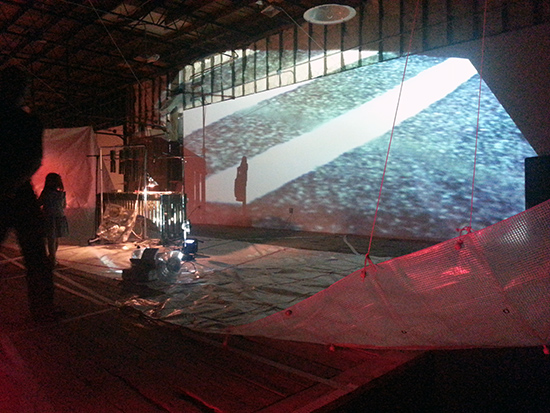 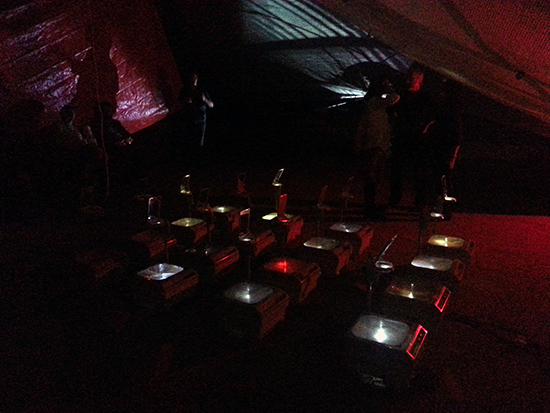 The audio didn’t start with a downbeat as much as it sort of rumbled awake. A drone peppered with metallic filigree whirled around via several speakers situated throughout the space, and after a few minutes Hennies made his way to a vibraphone located in the middle of the stage. A small projector next to the vibes was rigged with a camera pointed into its light source. This image was then projected onto another sheet behind Hennies as he performed. Hanging from a frame above the vibes were several “chimes” built by Travis Weller. Looking every bit like giant metal clothespins, each chime roughly corresponded to a bar on the vibes and had a contact microphone attached to it. Hennies began to play a short, syncopated, repeating figure which only lasted about five seconds, and as the mallets moved from the equally tempered vibes to the differently tempered chimes, wonderfully rich combination tones resulted. I say “differently tempered” as I don’t know what system Weller used, but those guys were separated by just enough cents to make things nice and wobbly. As this figure was performed, people circulated through the space while others set up camp on the chairs and benches. For twenty minutes at a time (the amount of time one is instructed to perform transcendental meditation) Hennies would play the figure. When this time elapsed, he would move to the bass drum, take two beaters, and perform a long quiet roll while sitting cross-legged behind the drum, his head inclined and nearly touching the drum head. This sound was felt more than heard, and after several minutes Hennies would return to the vibes to begin the cycle again, all the while accompanied by the visual and aural electronics surrounding him.


While the various curtains of plastic, lights, and projectors served to frame the space and direct attention, the seating arrangement also played a significant role. Putting a few benches in front of the performer might have been intended as a waypoint for weary travelers, but in the context of a performance they were a magnet (maybe this is where they “clot”?) and focal point, or at least a place to view the focal point. The point is that people who might have had a more circulatory experience ended up planting themselves for large chunks of time and watching Hennies. This is not necessarily a bad thing, but in speaking with patrons who had been to the opening CLOTS performance, a few commented that some modest changes in the show (including chair placement) had a significant impact on their experience. No one said it was better or worse, but it was interesting to hear that something as simple as seating design could have such an effect.

Despite the invitation provided by the benches, the most compelling element of the show was the degree to which the audience could choose their own experience. While there is a difference between sitting in the tenth row at an orchestra concert and hanging out with the grad students in the third balcony, the performance is still essentially the same. However, a trip to a museum can be different things to different people. You might walk through the whole place or spend an hour fixated on a single work, and these two possibilities played out among the audience members throughout the CLOTS show. And whether they sat, stood, or strolled, all participants experienced a show that, like its venue, was an example of what makes Austin a great place to see new art. 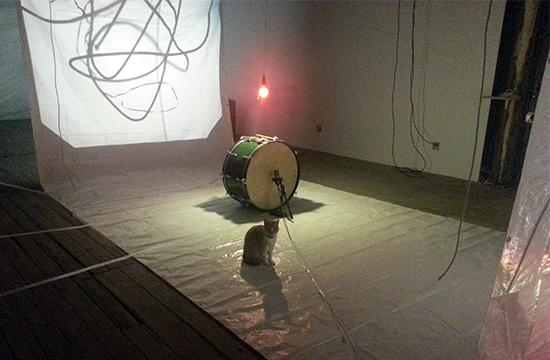 CLOTS was come one, come all