Classical Music to Unite a Community
NewMusicBox
Written By

Classical Music to Unite a Community

I’m sitting outside, picnicking with my family in a beautiful spot, sharing a view of a gorgeous river with 5,000 fellow residents of my rural community at southern Maryland’s River Concert Series. I see lots of young kids, teenagers, multi-generational families, people from all walks of life. I see a hillside just behind the stage, full of children running and playing. We’re watching the Chesapeake Orchestra, conducted by Jeffrey Silberschlag. The River Concert Series has been uniting my community for thirteen seasons.

For us, this is a typical summer evening. The River Concert Series has been uniting my community for thirteen seasons. For seven Friday nights in June and July, we all come together to enjoy each other’s presence, watch the sun set over the St. Mary’s River, and hear fabulous performances. The Chesapeake Orchestra is a fine orchestra, professional, made up of some of the best musicians in the Washington/Baltimore area. The concerts are held on the grounds of St. Mary’s College of Maryland, a small public liberal arts college where I teach in the music department. The principal players are college music faculty, as is the conductor. Scattered among the orchestral membership are a few select students. Over just the past few seasons, we’ve heard major works of Mahler, Bruckner, Richard Strauss, Dvorak, etc., as well as new music (including world premieres) by Chen Yi, Scott Wheeler, Louis Karchin, Jeffrey Mumford, Judith Shatin, Kenji Bunch, Nathan Lincoln-DeCusatis, and William Thomas McKinley, among others. We’ve heard Jon Nakamatsu playing Rachmaninoff’s 3rd Piano Concerto, Anne Akiko Meyers playing Barber’s Violin Concerto, Susan Narucki singing Aaron Jay Kernis and Berlioz, Caitlin Finch, Lara St. John, the Ahn Trio, the Haydn Trio Eisenstadt, and many others. 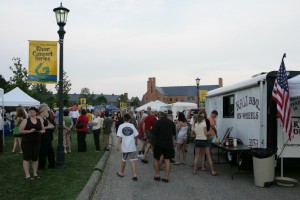 Most remarkable, though, is that these concerts would happen in this way in this community. Our local county has a population of only 105,000. The two neighboring counties that make up the rest of this little peninsula add another 230,000. That puts fewer than 350,000 people within an hour’s drive of the venue. Yet an average of 35,000 people come each summer, which—even as that figure undoubtedly includes repeat attendees—is astoundingly high and a sign of strong local support. My personal experience living here bears that out: throughout the year, nearly everyone I meet—from the people who come to work on my house, to local doctors, to wait staff in local restaurants, to the people who fix my car, to my neighbors who work at the local Navy base—when they find out I work in the music department at St. Mary’s College of Maryland, they inevitably tell me that they love these concerts, that they never miss them. (For the record, though I am a member of the faculty, and currently serve as chair of the music department, I do not participate in running these concerts, was not involved at all for the first five years, and am now involved only informally.) 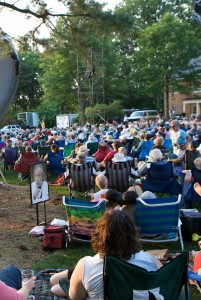 The concerts are free, with free parking. The money to fund the performances is raised mostly from the local community. Local businesses donate because they see their employees and customers in the audience enjoying these events. Local government wants to be involved because the voters are there. The food is good: area restaurants have discovered that they can introduce their food to a lot of people by setting up booths and selling picnic meals, and one can find everything from pit barbeque to gourmet sandwiches to great Indian food. The series attracts large numbers of younger people, too. My two daughters, a teenager and a preteen, both love going because their friends are there (as are their school teachers). The concerts—serious music notwithstanding—are informal. We bring lawn chairs and choose to sit in one of three sections, labeled “serious listening,” “casual listening,” and “serious socializing.” Over the years, the “serious listening” section has grown. But even in the back of the concert space, where the serious parties are going on, you can see the orchestra and hear the music, and people do pay attention.

Conductor Jeffrey Silberschlag has been the driving force. Besides being a first-rate musician, one of his greatest strengths is inspiring partnerships – with local business, local government, state government, local donors, and, of course, the college, St. Mary’s College of Maryland, which hosts the event.

Why is this repertoire classical and not primarily pops? Or rock or jazz or country? There is some pops mixed into the season, and sometimes a well-known jazz artist will perform as a part of an evening. But the concerts are mostly serious classical repertoire, and when we hear pops or jazz, it is in this context. This is because Silberschlag’s belief is that classical music works best for pulling the whole community together. He believes that other musics might fragment the audience, whereas classical music still seems to be seen by a large part of the general public as having universal appeal. The outdoor aspect also helps: the audience isn’t shut into a darkened hall and told to be completely quiet, so no one feels intimidated. They are free to enjoy themselves and go home feeling that they’ve heard something of quality. This has worked for thirteen years in our little community. 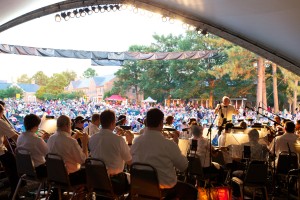 The series has grown, with music and other activities happening throughout the seven weeks. Now there are movie nights, with chamber music afterwards (thematically connected to the movie and that week’s orchestral concert); chamber concerts scattered through the community; a variety of educational activities (including a four-day pianists’ retreat with pianists Eliza Garth and Brian Ganz). But the heart of the summer is the orchestral concerts.

Our model has precedents: the New York Philharmonic concerts in Central Park or the National Symphony concerts on the Mall are two prominent examples. But those are occasional events, they lose money, and they tend towards pops programming. Further, as we’ve learned this year, they are subject to cancellation when funding runs low. For the Chesapeake Orchestra, this is what they do, supported by the community because it provides one of the few opportunities for us to come together for the sheer pleasure of the experience. 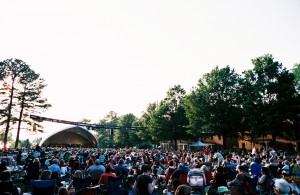 This clearly is one possible model for classical music’s future. The orchestra, though part-time, is paid fairly—in fact, the musicians have told me that they are thrilled to return each summer, and because of this, over the years, the membership has become quite stable. The music is heard through speakers and the acoustics are supplied electronically, but the sound is more than decent, the orchestra plays beautifully, and most important, the concerts are fun for everyone. More than just proof that classical music can reach beyond the aged and wealthy, the River Concert Series shows that classical music can be the way to unite an entire community.