We must see ourselves as collaborators within a much wider network of musicians and citizens, helping each other as best we can—be it through something as complex as presenting performances or something as simple as sharing each other’s work on social media—regardless of personal payoff. 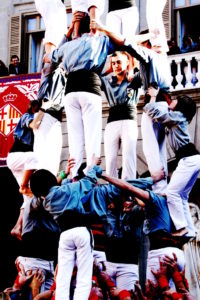 Collaboration is a buzz word that’s thrown around a lot these days, quite often referring to the relationship between composers and the performers for whom they write.  Adam Sliwinski began his series of posts for NewMusicBox in January by dealing with this very issue and exploring the mutually beneficial ways in which performers and composers can work together.  Most astutely, however, Sliwinski pointed out that, rather than discovering this on his own, he and his ensemble, So Percussion, are simply part of a trend that “has been sweeping across the new music world for quite a while.”  This trend is, to me, both as a composer and as an advocate, perhaps the most exciting development in contemporary music in the last fifteen years.
When I was in school long ago, the vision I inherited of a composer, while already changing, was still a somewhat romantic one in which we were expected to work in relative isolation, presenting our finished masterpieces to grateful performers who would then work very hard to present definitive performances of our work.

Well, okay, that’s not exactly true.  There was a lingering sense of this, and I still occasionally encounter this attitude among composers (and some performers) of a certain generation, but many of my teachers, particularly the younger ones, encouraged my peers and me to get out there and get to know instrumentalists, singers, and conductors.  Do you find that you’re having trouble writing a particular violin lick?  Go knock on a violinist’s practice room door and ask them to take a look and make suggestions!  Need to write a big piece for your dissertation and can’t decide whether you want to tackle the idealistic grand opera you’ve always wanted to write, or a violin concerto for your buddy who’s been hounding you for years to do it, has an orchestra lined up, and can program it as soon as it’s finished?  The opera can wait!  You decide to write the violin concerto—including some passages that are nearly impossible. Do you say, like Beethoven is said to have, “Do you think I care about your stinking fiddle?” or do you sit down with your friend and look for ways to make a passage more idiomatic?  I shouldn’t have to ask the question, yet there is a long-held and awfully pervasive attitude in some circles that the score is king, and I’ve been surprised at the number of performers who are nervous about asking for changes or offering solutions to awkward problems because they think I won’t welcome their feedback.  (Although I did have one performer recently who took this too far when, after I suggested that, of course, if some passages need to be reworked, I’d be happy to take a look at suggestions, s/he then went on to essentially rewrite the entire piece to the point that the premiere wasn’t so much a premiere performance as a premiere impression of what I’d written.  It was…odd.)

In any case, yes, this is the most obvious and immediate sense in which collaboration comes up in contemporary music, but I suggest that it’s not the only one.  Along with the attitudes I expressed in my initial, muckraking post—that a musical life is a political life—we must always remember that, as artists, we are all in this together.  In times of economic hardship, art is often first on the chopping block as a luxury item without which we can live and, conversely, is often the last such item to be added to growing budgets in times of plenty.  If we do not advocate not just for our own work but for the work of colleagues, partners, and peers, we continue to be the last line item to be added to budgets and the first to be cut.

Ultimately, what we do makes the world a better place.  While a performance does not literally put food in anyone’s mouth, the infrastructure that grows around performance venues often has an incredible impact upon a community.  I’ve never been much of a numbers person and, therefore, cannot speak to actual statistics, but in my own experience I’ve seen the transformation an arts scene can have on a community.

Three years ago, I was hired by the Atlas Performing Arts Center in Washington to develop and curate a new music series for them.   The Atlas is an old movie house which had burned down—though the facade remained—during the riots that swept the city in 1968.  A group of enterprising community members, led by the lawyer and philanthropist Jane Lang, bought the Atlas in the early 2000s with a plan to renovate it as a performing arts venue and anchor the renewal of the depressed H Street North East corridor in D.C. around it.  The transformation that has occurred in that neighborhood in the years since Atlas opened has been dramatic and tangible, financially and physically.  The city’s musical culture has dramatically changed as well, now that contemporary music has a wider presence in the area thanks to our efforts at Atlas.

To take the helm of a concert series—on top of an ensemble—is a great temptation for a composer.  It would be very easy to make the programming of my own work a prerequisite for a performance on my series, for instance, but this would be an obvious betrayal of my duty to my musical community. Managing a concert series and an ensemble is a rare privilege and an opportunity to make a lasting contribution to both my immediate community in Washington and the wider musical community of the United States.  Not only are we a part of a vibrant, growing scene in the District, but we are also able to provide work and exposure to some important established and emerging artists and composers.

I believe it’s an important challenge we all must undertake to advocate for one another.  The “mutual benefit balance” of which Adam Sliwinski wrote extends well beyond the immediate benefits of multiple performances and the nitty-gritty work of the composer-performer relationship.  We must see ourselves as collaborators within a much wider network of musicians and citizens, helping each other as best we can—be it through something as complex as presenting performances or something as simple as sharing each other’s work on social media—regardless of personal payoff.  The benefits will ultimately manifest themselves and reach far beyond the immediate gratification of a paycheck (although let’s not forget the importance of that paycheck, lest we get too idealistic and starve ourselves in the process) and into the realm of real, tangible cultural change.