A 60-minute tour de force, performed completely from memory and without pause, Colombine’s Paradise Theatre is a stunning display of physical and musical virtuosity on the part of its performers.


Although I ostensibly attended eighth blackbird’s performance of Colombine’s Paradise Theatre—the new commedia dell’arte-inspired “fantasy” with score by Amy Beth Kirsten and direction by Mark DeChiazza—as a writer and art observer, I could not help absorbing it with the mind of a performer.

A 60-minute tour de force, performed completely from memory and without pause, Colombine’s Paradise Theatre is a stunning display of physical and musical virtuosity on the part of its performers. It is also a testament to eighth blackbird’s commitment to going the extra mile in the creation of new work. Only a mind-boggling amount of labor—memorizing the score and learning elaborate physical staging and choreography—could have produced such a performance.

Colombine demands significant risk-taking and courage from the ensemble. All six players must deliver physical movement and hissing speech parts with panache. Violinist Yvonne Lam, darting and dancing all over the stage as one of the Harlequins, sang frequently and admirably. Pianist Lisa Kaplan, in the role of Colombine, gave an utterly natural, unaffected performance of a cabaret-style song at the piano. Flutist Tim Munro was perhaps pushed furthest, completely abandoning the comfortable mask of the instrumentalist poker-face. He shrieked, sang, sobbed, and hissed his way through the role of Harlequin. When he exited, wailing his final falsetto lines, we had the sense that he had left his soul onstage. 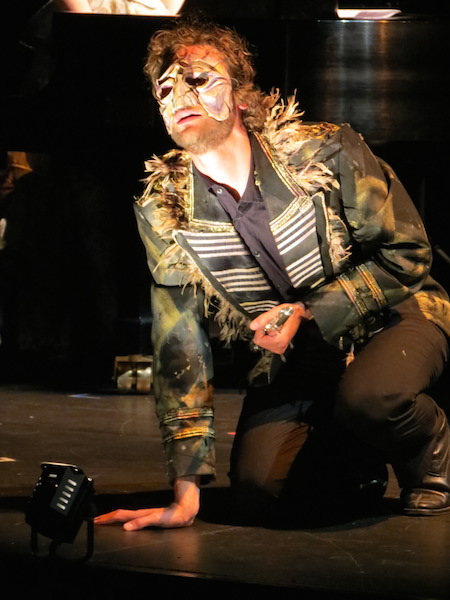 Kirsten’s score evokes diverse environments and moods, from cabaret to Sprechstimme, from witchy incantations to sparse percussion solos. Colombine is quite lyrical at times—particularly in the cello solos, played with great seriousness by Nick Photinos as the Harbinger. Yet the piece is dominated by scherzando whimsy and plenty of humor. Kirsten’s inventive use of doublings keeps the score full and lively at all times. She makes particularly effective use of nonsense syllables and percussive sounds to create spooky rhythmic patterns and textures.

The music is often organized to sound as if characters are inventing the musical material on the spot—repeating it in a testing, probing way, finally landing on a gesture that sticks. It sounds organic and improvisatory, but is completely notated. The pacing of each instrument’s “speech” allows Kirsten to create distinct musical characters in dialogue with each other.
The staging and direction by Mark DeChiazza is one of Colombine’s greatest strengths. It was clear both in the production itself, and in the post-concert discussion, that DeChiazza had generously embraced Kirsten’s inspirations and aesthetic. He has produced a visual and physical world which, while supporting the score, also has complexities and resonances all its own. Particularly ingenious was the way the set allows for a visual imitation of the instruments themselves: percussion setups hanging like chandeliers; metal tubes silently wielded as giant flutes.

While Colombine does not have a clear narrative, it is held together by an interesting set of potential questions. As the protagonist Colombine feels the tug of her various puppet-masters and suitors, we are encouraged to reflect on the power dynamics onstage: Who has agency? Who is excluded? Who has control over another? And what kind of contemporary commentary might the piece be making about commedia dell’arte?

For me, Colombine’s main limitation is that it doesn’t always offer a satisfying perspective on these questions. In particular, the choice to simply reproduce, rather than critically reimagine, the gender dynamics of the stock commedia characters feels like a missed opportunity. Contemporary listeners are quite familiar with the love triangle of two male characters “seducing” their puppet-like female ingenue, and it would have been exciting to experience a more contemporary twist on these patriarchal tropes. The virtuosic, erotic four-hands piano duo between Yvonne Lam and Lisa Kaplan—which helps Colombine pass the proverbial Bechdel test—is a promising moment. But their relationship never becomes thematically important, and in the end, the show doesn’t evince much more gender sophistication than the 16th-century texts that inspired it. 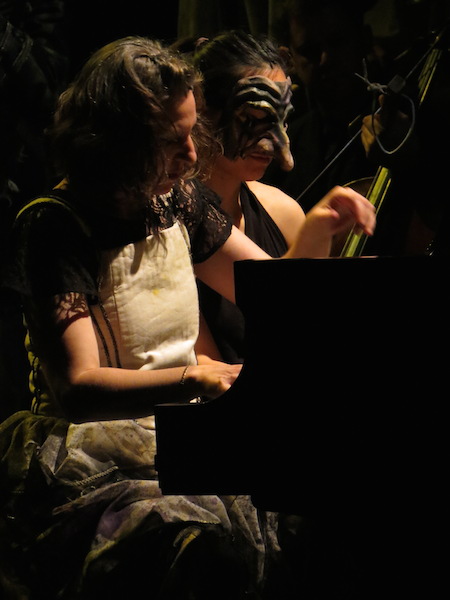 Lam and Kaplan at the piano

It might also have been fascinating to see the piece acknowledge—or better yet, dance with—the inevitable historical shadow of Schoenberg. But when asked during the post-concert discussion if she had been influenced by Schoenberg’s Pierrot Lunaire, Kirsten seemed surprised. She firmly said no, and mentioned that she had made a point of not listening to the Schoenberg during the creative process of Colombine. Yet with a character named Pierrot, Sprechstimme scenes, a dark and moonlit set, and an almost identical instrumentation, it will be hard for the piece to make its way in the world without evoking Pierrot. 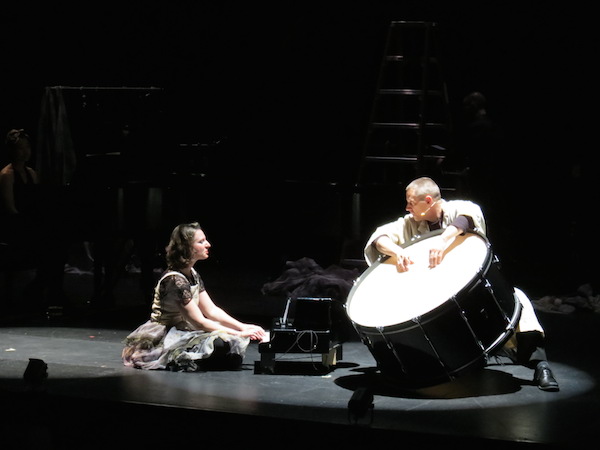 With its dazzling visuals, sumptuous score, and stunning performance, Colombine is a game-changer and a standard-bearer for the world of new music and interdisciplinary collaboration. It is sure to inspire an ambitious new crop of staged contemporary chamber music. This is perhaps why I wanted more to chew on theoretically and why I wanted it to be more than a fun, spooky confection. But when audiences enter Colombine’s macabre musical dollhouse—with a sensual surprise in every cobwebbed corner—they will probably, like me, be more than happy to play by her rules for the night.