Cheung and Shepherd Share In Kravis Prize at NYPhil

Anthony Cheung, French composer Franck Krawczyk, and Hungarian composer/conductor Peter Eötvös will share in the 2011 Marie-Josée Kravis Prize for New Music at the New York Philharmonic at the request of inaugural recipient Henri Dutilleux. The 2012 Kravis Emerging Composer will be American Sean Shepherd. 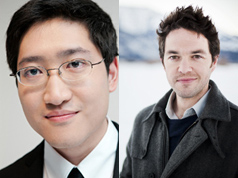 The Kravis Prize for New Music is bestowed every two years “for extraordinary artistic endeavor in the field of new music,” and French composer Henri Dutilleux was named the first recipient in 2011. At the award ceremony held in Paris on December 7, 2011, Dutilleux announced that he would share the $200,000 award with three composers, each of whom would write a work to be performed by the orchestra in his honor. Dates of the performances of these new works will be announced at a later time.

A Kravis Emerging Composer is to be named in years when the Kravis Prize for New Music is not awarded. The “promising up-and-coming” composer will receive $50,000 and an opportunity to write for the orchestra. As the 2012 Kravis Emerging Composer, Sean Shepherd will write a new work for the Philharmonic to be performed in the 2013–14 season.

Funding for The Kravis Prize for New Music comes from a $10 million gift given to the New York Philharmonic in 2009 by Henry R. Kravis in honor of his wife, Marie-Josée, for whom the prize is named, and which also endows The Marie-Josée Kravis Composer-in-Residence at the New York Philharmonic, a position currently held by Finnish composer Magnus Lindberg and soon to be held by Christopher Rouse. Prizewinners are selected by a committee comprising leading artists and administrators with close ties to the Philharmonic and a demonstrated interest in fostering new music. The total award—$200,000 to the winner of The Kravis Prize for New Music and $50,000 to the Kravis Emerging Composer—makes this among the world’s largest new music prizes.