Good Career Hunting: On Being a Deer Chaser

The work of building a career never stops. An all-to-brief encounter with Felicia Day helped R. Andrew Lee adjust his perspective on tackling both the big goals and the mundane chores.

As this is my first post for NewMusicBox since my series on entrepreneurship and because this post will be tangentially related, I feel obliged to make one quick comment before beginning. After quite a bit of time and reflection, I wrote a fairly lengthy follow-up to those essays over at my website, which I titled, “Entrepreneurship, Success, and the Illusion of Narrative or How Felicia Day Taught Me That I Was Wrong About Claire Chase.” I believe it offers a more nuanced perspective than my original posts, as well as a much-needed public apology to Claire Chase.

I find it difficult to talk about the struggles I have in my musical career. Part of that is from a desire to maintain a successful public image, but another part is worrying over how it would be received. I worry about sounding whiny and ungrateful to those who are working hard just to get where I am, and I worry about sounding hopelessly naive to those further along. But recent events led me to open up and write about what’s been bothering me.

I have been having difficulty lining up gigs for next season, interest in my albums has been in a bit of decline, and, darn it, I thought there would be a bigger response to the release of my tenth album. I’m not sure what I was hoping for, exactly, but it felt like a big deal to me, and I wanted others to feel the same. I was in a real funk. Then I went to a book signing where I got to meet a woman whose work I’ve admired for years, and in the process I gained some much-need perspective.

I came away from my brief encounter with Felicia Day feeling better about my career than I had in a long time.

I came away from my brief encounter with Felicia Day feeling better about my career than I had in a long time, and I felt inspired to write about why. Here is the tl;dr.

I was one of the last people at the book signing, and as I waited in line for more than an hour, I got to see the labor that goes into such an event. To make each fan feel special in only thirty seconds, to pose for picture after picture (knowing that each will likely be shared online), and even just to sign that many books seemed exhausting. And that’s when it clicked for me. Even though she’s successfully built a company from the ground up and written a New York Times best seller, I’m certain she still has to work tirelessly to keep her career moving ahead. It was a poignant reminder that the work, the pure effort of building a career never stops, and that helped me move forward. 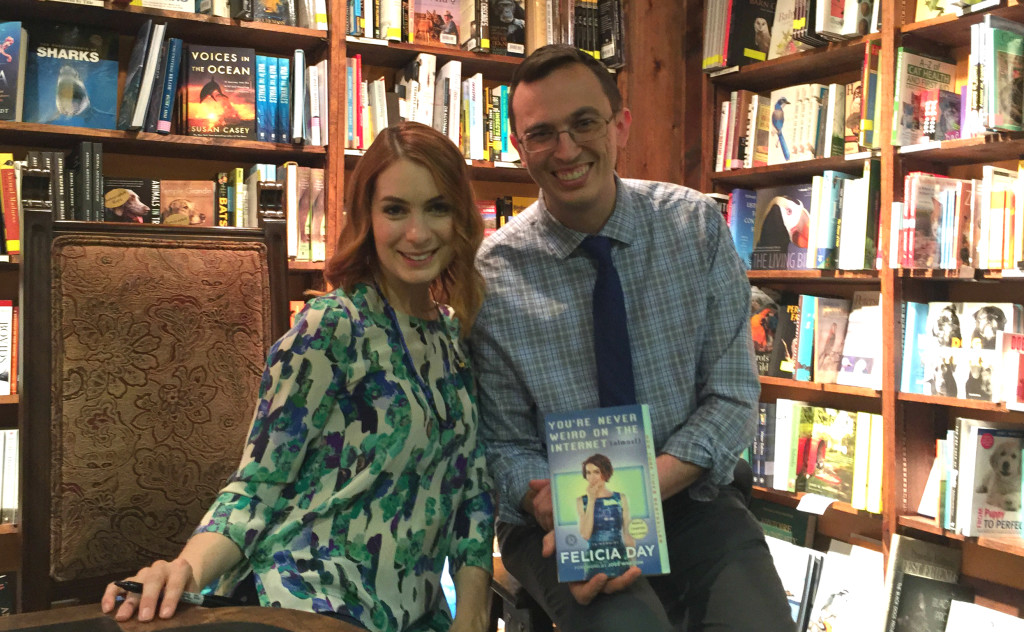 Andy Lee meets Felicia Day at her book signing and adjusts his perspective on career building.

So I wrote about it, and the response was incredible. I received lots of positive feedback and “you’re not alone!” comments, and I realized that many of the respondents were not in my circle of friends even a year or two ago. Moreover, I made new connections as the post got shared, notably among fans of Felicia Day who otherwise would have never encountered my music. (Shout out to Team Hooman!)

One particular response also brought to my attention a wonderful NewMusicBox article from Ingram Marshall, “The Tipping Point.” In the post, Marshall asks several prominent composers what they considered to be the tipping point for their careers. The article is well worth reading in its entirety, but I’d like to draw attention to one particular analogy he uses—the deer chaser.

A deer chaser, or shishi-odoshi, is a style of fountain used in Japanese gardens. Water flows into a piece of bamboo, causing the center of balance to shift and the water to spill out. As the bamboo returns to its resting position it typically strikes a rock, creating noise to scare away deer or other wildlife.

In his post, Marshall uses this image to describe the “near miss” of a tipping point. As he writes:

In the deer chaser model, the tipping point occurs, but it doesn’t create a steady rush, only a momentary one, and it keeps recurring at set intervals. I think a lot of composers experience this kind of tipping point, where they think they are on the verge of some kind of surge of popularity due to a big event—say a prize, a recording, a publishing contract, or maybe a big commission—but soon enough, as in the deer chaser model, they find that they have flipped back to their old position, the rush of the cascading water with its loud alarm having dissipated.

I experienced something quite similar with my album Dennis Johnson: November. It was reviewed in publications around the world, including sources such as The Wire and Gramophone, we quickly sold out of the first two pressings, and it helped me get my first gigs in London and New York. The icing on the cake was making a large number of “best of” lists that year, including the #1 classical album of 2013 in Time Out New York. That in turn landed me a big award from my alma mater and an interview with Colorado Public Radio, among other things.

Yet nothing I’ve done since has been even close to that successful, and I’ve spent many hours since wondering what I might have done differently to make that less of a deer chaser moment and more of a tipping point.

Since writing about meeting Felicia Day, however, I’ve come to think that it’s too easy to chase after tipping points and get frustrated by near misses. Instead, I’d propose thinking of the deer chaser less for its negative connotations and more for the positives the analogy holds.

The work never stops, forward momentum is rarely ceded without a fight, and chasing tipping points is a fool’s errand.

First, a deer chaser makes noise, and that’s exciting. There are a lot of things I want to do with my career, but making some noise and getting noticed seems like a good place to be. Second, all the water that pours out of the deer chaser has to go somewhere. No, we don’t always get to control where it goes, but that water still nourishes the soil and helps create new growth.

Likewise, career progress is often difficult to see. I haven’t sold any CDs as a result of that post, nor have any gig offers come my way, but I’ve expanded my new music network (to use a crass term), and I’ve gotten my foot in the door with an entirely new community. It was also a useful reminder that I enjoy writing. That’s not nothing.

I’ve also used this new mindset to help tackle mundane chores. I’ve complained about how hard it’s been to find gigs, so I’m trying to be more organized in my efforts, to make more cold contacts, and to be more forward in general. I’ve complained about the lack of attention given to my recent albums, so I’m writing about the stories behind them and trying to up my social media game (without becoming a self-promoting drone). In short, I’m trying to remember that my efforts to build a career are not in vain.

Still, while I’ve psychologically gotten over this current speed bump, I know that many more lie ahead. When the next one crosses my path, the first thing I’ll do is give myself permission to vent my frustrations. Somewhere inside my head is a little voice that believes that complaining doesn’t fix anything, but I know better. True, complaining isn’t going to get me a gig, but it may well help me become emotionally ready to press ahead once more in a career filled with rejection and disappointment. And while I’ll allow for a bit of public complaining, I’m also going to use a lifeline (and expired cultural reference) to phone a friend and have a real conversation.

The other thing I’ll do is try to remember my all-to-brief encounter with Felicia Day. Seeing a small portion of the labor that goes into her career brought me some peace about my own. It reminded me that the work never stops, that forward momentum is rarely ceded without a fight, and that chasing tipping points is a fool’s errand. So for now, I’m going to seek contentment as a deer chaser, making as much noise as I possibly can and nurturing my career bit by bit. 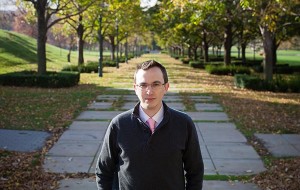 Pianist R. Andrew Lee is one of the foremost interpreters of minimal music. He has recorded ten solo albums with Irritable Hedgehog Music, which have made “best of” lists in The New Yorker, Time Out New York, The Wire, MOJO, and Gramophone among many others. Upcoming projects include previously unreleased piano music by William Duckworth and a 3.5 hour composition for piano and electronics by Randy Gibson, a longtime student of La Monte Young. Lee currently teaches at Regis University in Denver, Colorado, and was most recently artist-in-residence at Avila University.