As a singer and instrumentalist who has worked in at least a dozen different musical genres, Caleb Burhans has always been drawn to the inner voices preferring to, as he puts it, “play second violin or viola than first fiddle.” This attraction spills over into his own deceptively simple, extremely meticulous musical compositions.


It might seem surprising—given all of Caleb Burhans’s accomplishments within multiple musical scenes as well as his notoriety—that it would take so long for a disc devoted exclusively to the musical compositions to be released. Yet when we spoke with him in late July, it was on the very day that Evensong, the first CD to have his name on the spine, was released on Cantaloupe Records. It was also just a few days after his daughter Fiona was born: “It’s rather insane; they’re obviously the two hugest things in my life thus far.” That’s saying a lot for someone who has appeared on stages ranging from Carnegie Hall to Madison Square Garden, has had works performed at Lincoln Center’s Alice Tully Hall as well as the Darmstadt International Music Institute, and was the subject of a New York Times profile nearly five years ago.

But after our conversation, it became clear that Burhans does not particularly seek the limelight, preferring to be—as he put it—“a cog in the machine” rather than “standing out front.” This attitude informs his approach to being a performer (he’d “rather play second violin or viola than first fiddle for the most part”) as well as how he creates material for most of his more popular music-oriented endeavors, such as itsnotyouitsme, his ambient indie rock duo with guitarist Grey Mcmurray, which has released three albums thus far. But the rarified world of notation-based music is inherently a non-collaborative process and its denizens expect compositions to come from a singular auteur. Yet while others might feel that writing a fixed score for other musicians to play is a very different process from creating music with others either in real time or in a recording studio, Burhans doesn’t draw distinctions between these modalities and is able to make music effortlessly in each of them. At the same time, however, the lessons he learned from his immersion into so many different kinds of musical experiences have also made him extremely meticulous about the material he puts out into the world, whatever the genre. So for him Evensong had to be far more than merely a collection of music works he composed over the past decade; it had to cohere and flow from track to track as an album.
While being open to such a broad range of stylistic aesthetics, both as a co-creator and as an interpreter could have yielded a compositional voice that is all over the map, Burhans’s approach to the music he commits to the page is remarkably singular and almost austere in its sonic purity:

“I made a conscious decision when I was in my early 20s to write the music I write now. … Because I have so many different outlets for playing different styles of music, I decided that at the end of the day I want to go home and write music that I want to listen to and create on my own. Because I do get to play some really thorny contemporary music and free jazz, when I go to write I want it to be very pristine and very simple.”

Simple, however, is something of a misnomer. Admittedly—compared with a great deal of contemporary music—a typical Burhans score looks relatively straight-forward on the page and a performance of it sounds relatively simple, but appearances can be deceptive. While pieces like his 2005 Iceman Stole The Sun or oh ye of little faith (2008), both scored for chamber orchestra, are largely created from cycles of repeated phrases, the musicians often stress different beats from one another and the various phrases frequently begin in different parts of the measure resulting in an ambiguous sense of downbeat. (See score sample below.) While in his Magnificat and Nunc Dittimus, both for treble voices and organ (2004), the voices mostly move in parallel motion with one another (in Nunc Dittimus they’re actually mostly in unison!), they often go against the rhythmic flow of what is being played on the organ. And then there are the glissandos that permeate all of Burhans’s music and give it a heightened sense of instability. When musicians pull it off it comes across as otherworldly, but doing so requires a high level of concentration as well as musicianship—an attention to subtle details, particularly pitch and rhythmic clarity:

“I’m very, very specific about everything. One of my pet peeves is that people think of glissandi as portamentos and so they do them at the last second; a glissando should last the entire duration of a pitch it’s coming from. I used to write much more dense microtonal music, but I got fed up with having to play pitches for people and say, ‘This is a sixth tone.’ I found that very inaccurate; it would never be the same across the board from player to player. But I found that if I say glissando from this note to this note within this duration, that’s the only way you can actually control that. … I’m very rigorous about keeping things precise…
“It can kind of put me in a bad position with some new music ensembles. When they have a million pieces to learn, they’ll see my piece and think, ‘Oh, It’s in D major and in 6/8—all right, fine; we’ll play through it once.’ Then they get to the concert and totally mess it up, either play it out of tune or forget a repeat. I get that; I’ve been there before. It looks simple, but it takes a different type of focus.”

One of the things that has helped Burhans get what he wants from performers who play his music is that he is so active as a performer himself, so there’s a lot of mutual empathy. As he acknowledges, “Being on the same page with someone else can really open things up not just in terms of execution but also in terms of interpretation.”

But it goes much deeper than that. Three of the seven tracks on Evensong feature Alarm Will Sound, a group he helped found and which he remains very much a part of. Another three feature the Trinity Wall Street Choir, a group he sang with when he first moved to New York City and in which his wife—soprano Martha Cluver—still sings. In fact, the only group featured on the present CD with which Burhans does not have an almost familial relationship is the Tarab Cello Ensemble, who commissioned his lush The Things Left Unsaid which they perform on the disc. But, of course, as an active violinist and violist (plus he also played cello as a teen), Burhans is completely in his element working with string players.

The week we spoke with him was definitely an auspicious one, but the best is undoubtedly yet to come. Aside from a series of eight caprices for electric guitar he created espressly for Mcmurray more than a decade ago that clock in at approximately 90 minutes in total, Burhans’s compositions have tended to be smaller scale. Most of his pieces hover between 5 and 15 minutes. But given his love for the Anglican choral music tradition and his adeptness at writing for voices, a large scale work for chorus seems inevitable at some point in the not-too-distant future. He also expressed interest in writing a full length concerto for itsnotyouitsme and orchestra, an activity that would bring some of the disparate parts of his musical universe even closer together. It will certainly be worth the wait. 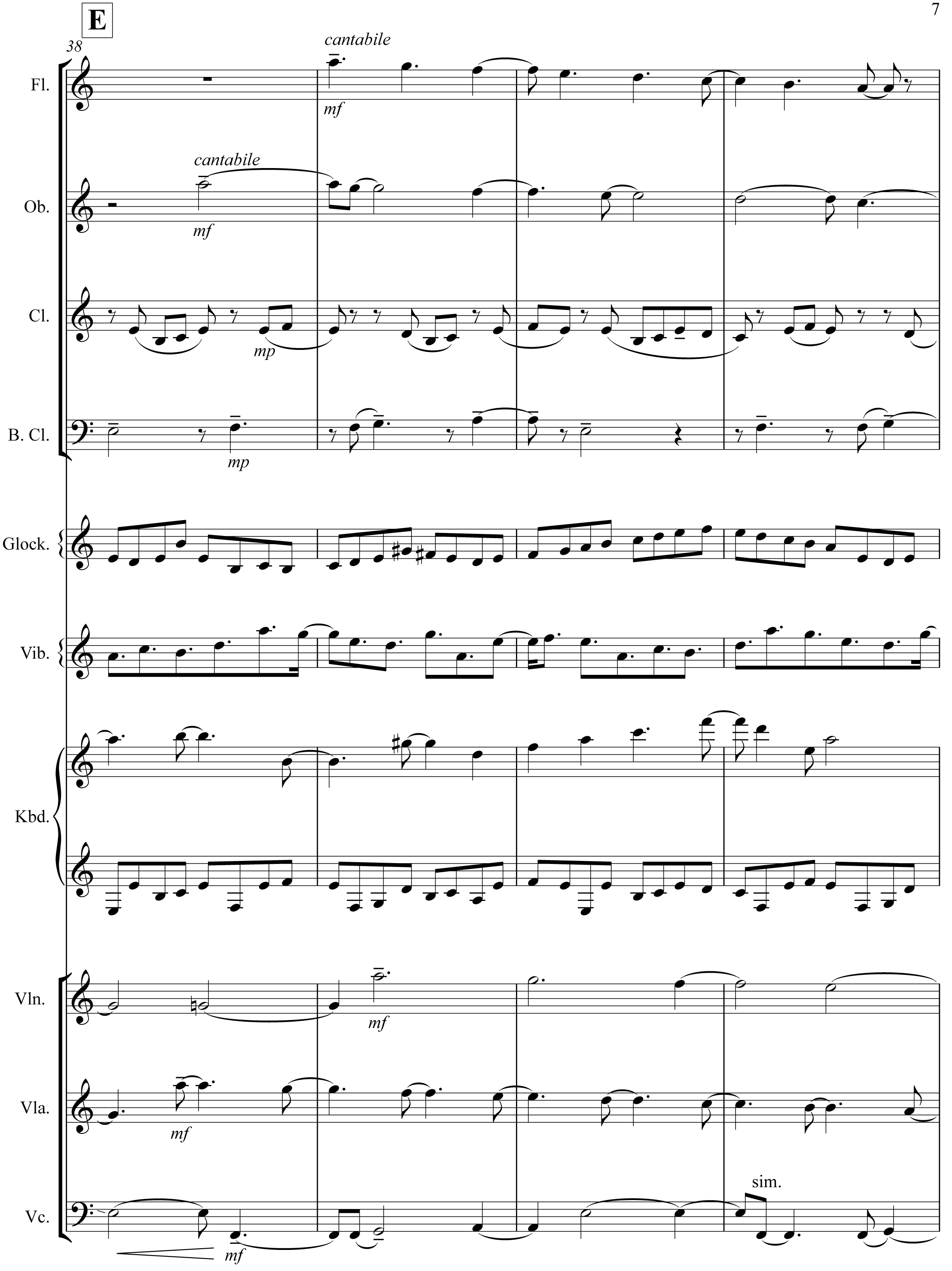 Page 7 of the score of Caleb Burhans’s oh ye of little faith… (do you know where your children are?)
© 2008 Burning Hands Publishing (ASCAP). Reprinted with permission of Caleb Burhans and Good Child Music.