Cabrillo and the Post-Alsopian Future

Alsop’s final festival next year will be her 25th, leaving behind a deep legacy. Her successor will have giant shoes to fill, and multiple challenges.

Alsop congratulates Béla Fleck on his Banjo Concerto The Imposter, 2014

Three shows with die-hard fans have lost their mainstays. First Stephen Colbert, then Jon Stewart—and now Marin Alsop announces a leave-taking from her Cabrillo Festival of Contemporary Music. Can California new music lovers survive the deprivation? Stewart and Colbert might seem odd comparisons, but among her many attributes, Alsop’s sense of humor will be missed as much as her musicianship. Who else would end a concert of premieres in 2007 with a fanfare for kazoos and brass specially written for her by John Corigliano? Alsop’s final festival next year will be her 25th, leaving behind a deep legacy.

I’ve attended and written about every festival since Alsop’s arrival in 1992, and this announcement has pulled her signal accomplishments into focus: 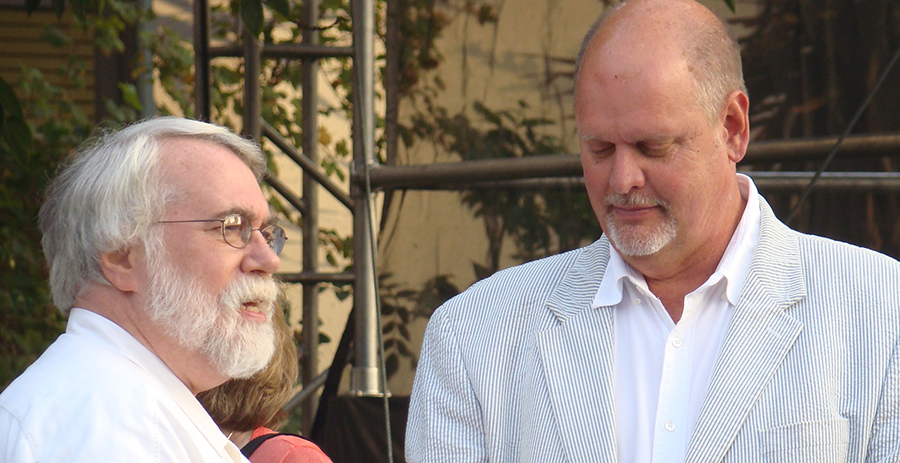 Let me continue with listening highlights per decade:

The 1990s. If any one piece stands out in the entire history of Alsop at the helm of the festival, it’s Rouse’s Gorgon from 1995. This monstrosity is so loud that at least one orchestra rebelled rather than play it. As far as I know, this work—one of the most viscerally driven in the entire repertoire—has been played only three times since its Cabrillo appearance. (It premiered in Rochester in 1984.) Yet it is to his oeuvre as The Rite of Spring is to Stravinsky’s, and should be heard far more frequently. Although it’s available in recording, nothing compares to experiencing this incredible music live.

The 2000s. Three works are most prominent in memory. The first was Daugherty’s first violin concerto, Fire and Blood, in 2003. I had begun to categorize him as a glib, cheeky, pop satirist with so many pieces like Elvis Everywhere and Le Tombeau de Liberace. But the concerto was something of substance and rare melodic content. The event proved Alsop’s investment in him was worth the wait. Another impressive 2006 work was Michael Gatonska’s The Whispering Wind. In contrast to the Daugherty story, I’ve heard nothing from the man since on this side of the continent. Finally there was Thomas Adès’s concerto for violin Concentric Paths in 2007. I had not been much enamored of Powder Her Face earlier, but the Cabrillo performance of America, A Prophecy the year before had convinced me that Adès was a composer of the highest rank. The concerto may prove to be a long-legged masterpiece as the new century progresses.

The 2010s have one more year to play out in Alsop’s tenure, but two amazing pieces deserve mention. The first is Thomas Newman’s It Got Dark. Written for the Kronos Quartet and orchestra and performed at the 2013 festival, it has been perfectly described by the quartet’s founder David Harrington as “… beautifully and subtly overwhelming,” with “melodies that you can’t get out of your mind for weeks.” If there is anything I lament about the present state of contemporary music, it’s its neglect of memorable melody—one of the cornerstones of classical structure. Newman was so striving about the need to communicate with his audience that he handed out four-page colored programs printed at his own expense about the music. I wish more composers would follow his example. The second highlight of the 2010s was this season’s The Color Yellow by Huang Ruo, an amazing concerto for sheng. Wu Wei was such a master of this unusual (to Western ears) instrument, that the audience went into a frenzy that nearly matched its reaction to Gorgon 20 years before. But it was not just the player; it was the composition’s arc, a gradual transition from agony to ethereal beauty, that made the evening so unforgettable. 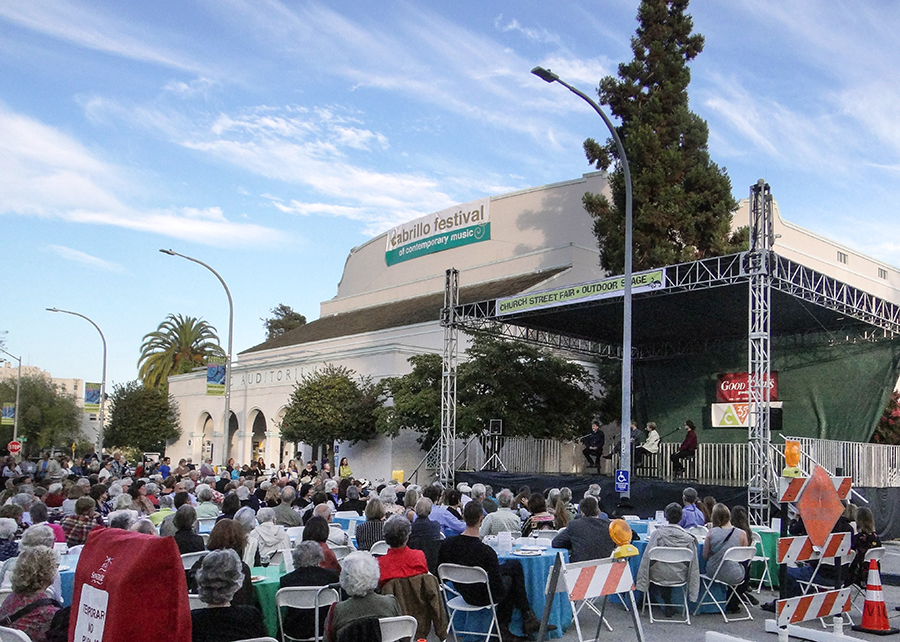 Informal talks outside the Santa Cruz Civic Auditorium, where most of Cabrillo’s concerts are held, also typically attract a large audience.

Almost invariably, Alsop has chosen music that would appeal to audiences rather than greatly challenge them. Over the period of her tenure, postmodernism has given way to the new eclecticism. Rock, world music, and electronica have infused the mainstream, as demonstrated by Alsop. European byways such as spectralism and residual modernism have made few appearances at Cabrillo. The only “ism” other than eclecticism that deserves a prominent place in this review is the one that to this day—when it occasionally shows up—is the most predictable way to elicit enthusiastic audience response in Santa Cruz: minimalism. I had thought this style had moved along with Adams into postminimal eclecticism, but I have found it to have staying power, more than any other style, in the hearts of the Cabrillo audience here.

I expect as time goes on, the joys of purely acoustic music will be known to a smaller and smaller coterie of concertgoers. Just as few today seem to remember the high quality of landline transmissions vs. cell phones, I expect loudspeakers and electronic manipulations will become the new mainstream, particularly as younger audiences, with increasing percentages of hearing loss, will demand their music to be juiced. Synthesizations and sampling will become a larger and larger portion of composers’ toolboxes, perhaps with some amazing results.

Alsop’s successor will have giant shoes to fill, and multiple challenges. Alsop has a strong personality; no one can hope to duplicate it. If someone tries to do so, it may ease the transition, but will probably result in a shorter tenure. The next director should bring her or his own contrasting personality to the job. The director should be different, a new shot in the arm, but committed to the signature aspects of the festival:

If the festival backers need to do anything in concert with the next music director, it is to consider expanding the geographic scope of its operations. I’m amazed that locals I speak with who work only a block away from the festival don’t even know it exists. Few of my music associates in the San Francisco Bay Area, where there is a huge potential audience, are aware of what Alsop has accomplished down in the small seaside city too far for a comfortable drive from metropolitan artistic centers. The festival should consider, like the Ojai Festival has done, holding some of the performances in venues farther north—say, the Bing Concert Hall on the Stanford University Campus. There is nothing special about being half a mile from the water in Santa Cruz once you are in the festival auditorium. The music, and Alsop’s legacy, are so special in their own right that the beach-city ambiance—attractive as it may be—fades into insignificance. 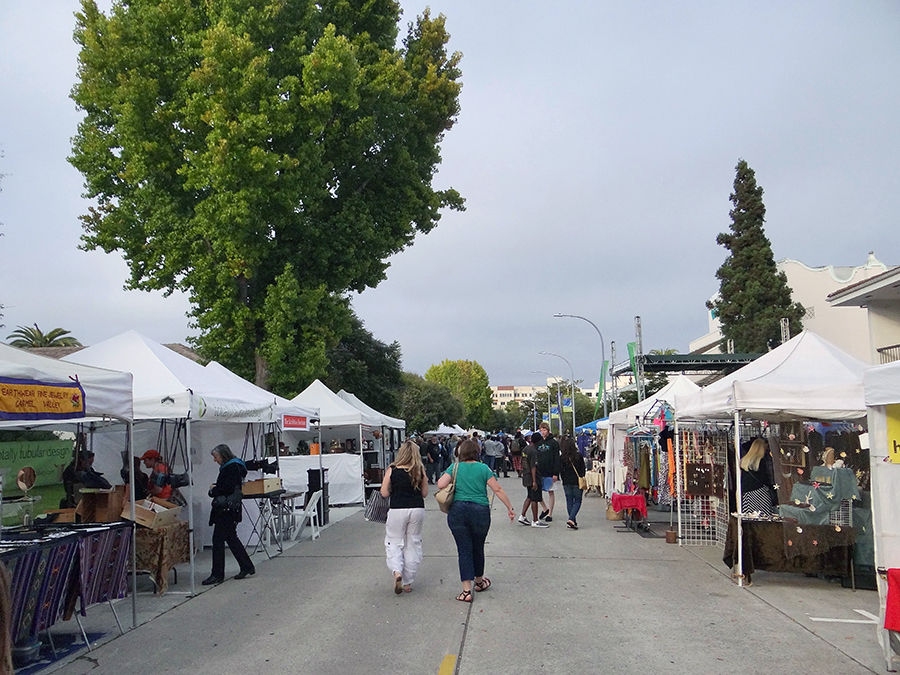 Street Fair at the festival every year