Providing great performances and cultural snapshots of Austin then and now, Copland and Mexico and Brooklyn Rider gave us an inside look into where we’ve been and where we’re going. 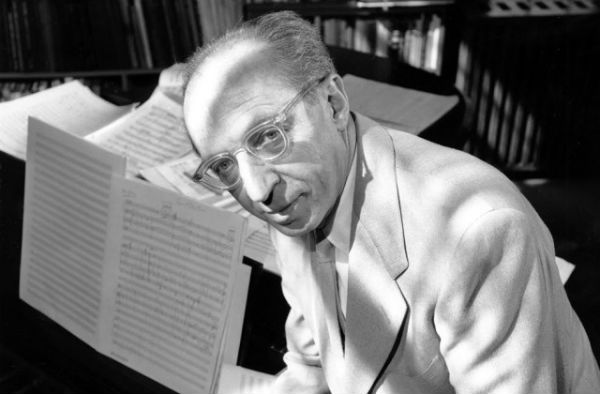 Conceived and curated by Joseph Horowitz and presented in partnership with Texas Performing Arts, The Butler School of Music, The Austin Symphony Orchestra, and the National Endowment for the Humanities, “Copland and Mexico” was a four-day celebration of the music surrounding Copland’s trip to Mexico in the early 1930s. Copland, a Brooklyn composer of the last century, hoped to embrace the folk music of both Mexico and the United States, and this trip had an impact not only on his creative material but his sense of social purpose as a composer. His output following this trip includes works such as El Salón México and Billy the Kid, pieces that spoke to his new populist leanings. The former a hodgepodge of dance hall tunes and folk songs and the latter populated by cowboy tunes, both were wildly popular and signaled Copland’s desire to move towards a more accessible and nationalist means of expression.

Three shows (four nights counting the ASO’s repeat performance) focused on different portions of not only Copland’s output but also that of composers in similar veins, as well as other cultural and artistic endeavors that speak to the period. ASO’s show included wonderful performances of  El Salón México and Two Mexican Pieces (“Paisaje Mexicano” and “Danza de Jalisco”), plus Carlos Chávez’s Chapultepec and Redes (complete with film) with a score composed by Silvestre Revueltas. The final work is significant not only to the populist theme (fishermen in the Gulf of Mexico experience a labor-related political awakening) but also for its connection to Austin. Mexican nationalist composer Silvestre Revueltas is best known for a significant creative period late in life, but he is less well known for the time he spent in the U.S.A. in his early years, in particular the time spent at St. Edward’s College (now St. Edward’s University) in Austin. His contribution to Redes is significant in that, to quote Dr. James Buhler, associate professor of music theory at the Butler school, “Revueltas’s music is beautifully composed to sound as though it must labor mightily against the technology, a straining that is central to its affective character. In live performance this musical struggle with technology is transformed into an opposition, as music is freed from the grim determinism of the recording apparatus.”

I don’t know the original soundtrack version of this music, but the ASO performance was stunning, and the free, organic quality of live performance did make for a compelling contrast to the content of the film. Other events in the series included performances and workshops by Danzonera SierraMadre of Monterrey, Mexico, northern Mexico’s most prominent danzón orchestra, with UT music students and Patio del Danzón dancers as well as the UT New Music Ensemble, UT Percussion Group, and the UT Symphony Orchestra performing works by Copland, Chávez, and Revueltas. I only wish I could have seen them all.

The second concert of Brooklyn Rider’s ten-day Texas Performing Arts residency featured new works by several American composers, as well as Schoenberg’s second string quartet performed by Brooklyn Rider with Dawn Upshaw. Following an opening volley in the form of Schubert’s Quartettsatz was a performance of one of the group’s “Brooklyn Rider Almanac” commissions, Dana Lyn’s Maintenance Music. Inspired by Mierle Ukeles, self-appointed artist-in-residence at the NYC Department of Sanitation , Maintenance Music was written to draw attention to the everyday workings of our daily lives. Starting from out of nowhere with a texture like tuning, the piece featured glissandi from one chord to another as the cello played a wandering melody, an arrangement that switched to viola in short order as the other strings took up harmonics. Quick arco interjections played back and forth with pizzicato, building then stopping with a five-note riff. A group of discordant, rising, symmetrical arpeggios marked another section, one of many moods that rolled by in the work.

This was followed by Evan Ziporyn’s Qi, a piece that, in an evening of heavy-duty tunes and stellar performances, stood out as particularly special. The opening movement, “Lucid Flight,” featured pulsing factory rhythms which made way for long, luxuriant lines that developed into pointed sixteenths traded among the players. Big, blocky harmonies reminiscent of the best of the minimalist tradition faded into one another, almost as if the parts were suspensions and anticipations writ large. The following movement, “Garden,” was particularly compelling. Ziporyn spread chords across the ensemble with plenty of double-stops and little vibrato, imparting a pedal-organ impression that was stunning. This was complimented by a later section in which a similar treatment with harmonics sounded somehow like a harpsichord without the attack, which is something I think we can all get behind. His sense and use of rhythm was absolutely spot-on. Though he used relatively little surface complexity (no tuplets were nested in the writing of this piece), Ziporyn’s ability to take a relatively simple harmonic fabric and lay it over a subtly shifting rhythmic foundation left me constantly wondering where the pulse would be next. Though it sounded nothing like the following, it reminded me of how the Pixies sounded when I first heard them; recognizable and alien all at once.

For the second half of the show, Dawn Upshaw joined the ensemble for Schoenberg’s second string quartet as well as a new work by the group’s Colin Jacobsen. The Schoenberg was wonderfully rendered, and clearly Upshaw is still at the top of her game. Jacobsen’s Suite from Chalk and Soot was a five-movement work drawn from a larger piece for quartet and dance with text by Kandinsky from Klänge. It should be noted for those unaware that Brooklyn Rider draws its name from Der Blaue Reiter, a group of artists (Kandinsky among them) based in Munich in the early 20th century, so the use of Kandinsky’s work is not random. The texts in Klänge focus on the sound of words as much if not more than their meaning, so it should come as no surprise that the narrative in each of these is heavy on the whimsical and light on the narrative. Highlights included the slithery sul ponticello edging around the opening movement “Look,” as the quartet juxtaposed Upshaw’s clear tone with a creepy, muttered, singing response. “Curtain” made a reprise of an initial declamatory gesture from “Look,” and then turned a corner with fevered tremolo and talking among the players. The final movement, “Table,” was full of joyful expression, with clapping gestures moving around the quartet and Upshaw in a 5/8 rhythm. Even the light guy got in on the action, bringing in total darkness once or twice before the actual final downbeat.

Sponsored by some of the heaviest hitters in Austin, both projects sought to present hidden gems of yesterday and today to the initiated as well as to an audience that might not otherwise uncover them. Providing great performances and cultural snapshots of Austin then and now, Copland and Mexico and Brooklyn Rider gave us an inside look into where we’ve been and where we’re going.