By including everything from electronic works and acoustic ensemble performances, to a sound art installation for amplified table, and even an eight-foot long embroidered score, this festival was a testament to the area’s artistic diversity.

This year’s Hartford New Music Festival (HNMF)—an annual event founded in 2011 by percussionist/composer Bill Solomon and composer Matt Sargent—consisted of a marathon concert on Saturday staged at the Charter Oak Cultural Center in Hartford.  As director, Solomon explained that his goals were to “present a mixture of local composers/performers/ensembles and more internationally recognized composers…to present newer work in a historical context.”  Though this may seem like an ambitious programming objective, it succinctly captures the primary characteristic of Saturday’s four-hour long concert. 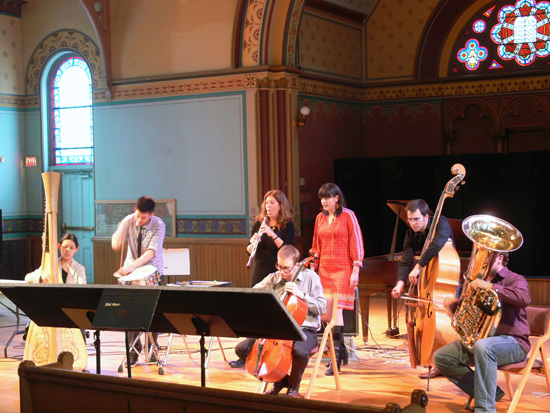 In an era when the term “music” has become so all-encompassing, we often find art categorized into complicated frameworks of sub-subgenres.  To make sense of the expansive repertoire, we become hyper-specialized listeners; organizers limit events in scope, aesthetic, media, and artistic pedigree to the most conservatively curated set of similar (if experimental) works.  But this was refreshingly not the case at HNMF.  By including everything from electronic works and acoustic ensemble performances, to a sound art installation for amplified table, and even an eight-foot long embroidered score, this festival was a testament to the area’s artistic diversity.

In Alvin Lucier’s Charles Curtis, cellist Jessie Marino insinuated her slow, vibrato-less tones into a haunting soundscape of electronic drones.  The work unfolded as a study of timbre, without deviations in gesture that might overshadow the colors. The patient insistence of the repeated gestures allowed us to experience each harmonically rich sonority as a discreet “object.”  The room quieted to hear the subtle timbral shifts in the otherwise static material of each gesture. 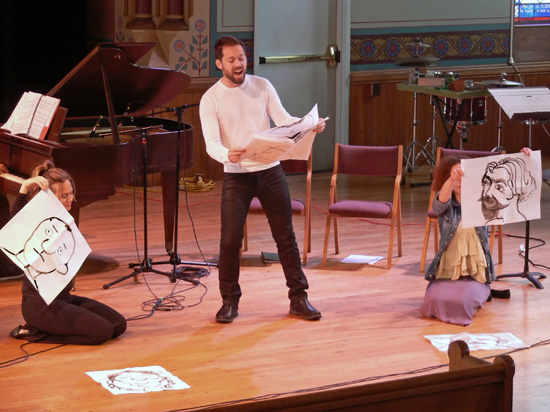 Only minutes later, the mood changed drastically.  The ensemble EXILKABARETT unleashed a furious burst of acoustic energy in Kirsten Volness’s Peppermill Songs.  These pieces, performed without break, set WWII-era protest writings by cabaret performer Erika Mann.  In keeping with cabaret tradition, an exaggerated performance invited the audience into the piece, though it did not read as musical protest.  Tenor Darren Chase spat out lyrics while unceremoniously dropping the oversized pages of his score down to the two sopranos sitting at his feet.  The women picked up each, holding the caricatured portraits that were sketched on the backs of the pages high for the audience’s benefit. Volness’s satirical cabaret merely hinted at the musical chaos to come, however.  In John Cage’s Musicircus later on the program, all were invited to move throughout the space as seven of his works were performed simultaneously.  This fanciful piece—part performance, part installation, and part social event—seemed to illustrate the breadth of the festival’s stylistic ambitions.

Owen Weaver presented two movements from Memory Palace by Chris Cerrone.  In the first, he plucked a quirky diatonic melody on piano strings to an electronic background of crickets and drones.  The second was performed on a “homemade marimba” of wooden planks, from which Weaver elicited a fluid melody in controlled rolls.  The dry attacks of the mallets grew more pitched and resonant as the electronics amplified the inherent tones of the wood.  This simple, but elegant, process continued for several minutes, undermined only by the conspicuous placement of a kick drum at the performer’s feet.  The waiting instrument evoked questions of how the piece’s gradual development could accommodate this disparate object.  Those questions were resolved abruptly; Weaver struck skin and wood simultaneously and the melody, with its ghosted electronic resonance, was suddenly gone in a percussive snap.

Robert Carl’s Woodwind Quintet No. 2, “Bird of Guandu,” addressed ideas of anticipation and space through the observation of nature.  The quintet began with simple chorale-style progressions separated by brief silences.  For the second movement, the players moved from a traditional centered formation to separate corners and donned headphones.  Each responded in imitation to his/her personal birdsong recording, creating sparse eruptions of instrumental warbles and coos.  This movement acted more as installation than linear composition, disregarding the conventions of form and development.  We could not anticipate the moments of silence, changes in texture, or the progression of sounds—we simply observed the Taiwanese birds through the filter of the quintet.  The final movement acted as resolution, combining a variation on the first movement’s material with the introduction of a sparse electronic background of birdsongs. 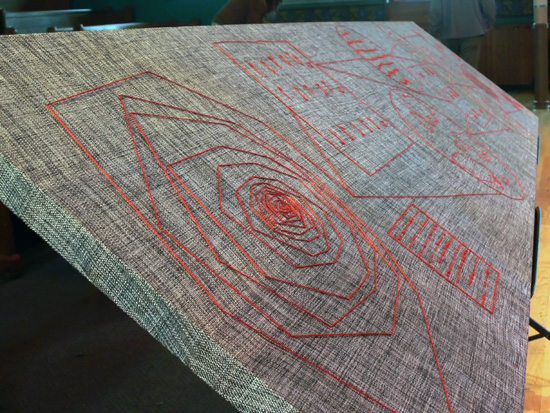 The festival commissioned the final piece on the concert, a work by Anne Rhodes titled Embroidery for small ensemble.  Rhodes’s embroidered graphic score (measuring 2’x8’) acted as a map for the improvising musicians who premiered it.  Though she did not limit the performers in their ranges of sound, Rhodes gave specific instructions for interpreting the score: rhythms and contours in squares were to be interpreted literally; figures contained in circles were to inspire the performers to explore extended techniques; musicians were to stay roughly together in the score by listening to one another; they could leave off anywhere in the form to play either the square in the bottom left corner or to perform an interpretation of the background texture.  Rhodes described how the varying textures, colors, distortions of the fabric weave when stretched, and imperfectly realized shapes could elicit varied and surprising responses from musicians.  This lovely artifact did seem to inspire the musicians, and the structures imposed helped to create more formal coherency in the performing group’s improvised music. 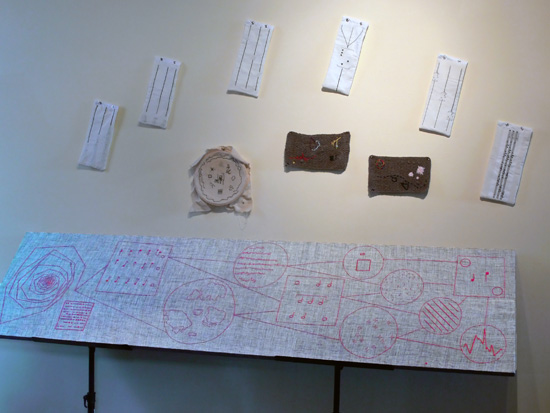 A display of Anne Rhodes score and artwork at the entrance to the festival.

Beyond the concert in the main room, works of sound art were installed throughout the Cultural Center.  Most notable among these was a piece by Ken Steen and Gene Gort, two artists collaborating under the name New Music New Media New England (NMNMNE).  Their project randomly paired 60 videos with 60 compositions, all of 60-second duration.  They explained that 60x60x60 began as an exercise for students; it was a means of exploring complex relationships between audio and video beyond those of the common “predictable, illustrative, cinematic” combinations.  NMNMNE referred to themselves as “curators/participants” in “a generative process,” not authors.  The minute-long works were often compelling in their own right, but it was the experience of watching them in succession that evoked the strongest response.  It drew attention to the roles and relationships of sound and video, but also to those of the observer; knowing that these were random pairings, one had to acknowledge the inevitable compulsion to “make sense” of the two elements as a unified whole.  60x60x60 is ongoing, with another call for submissions and an interactive version of the project on their website. 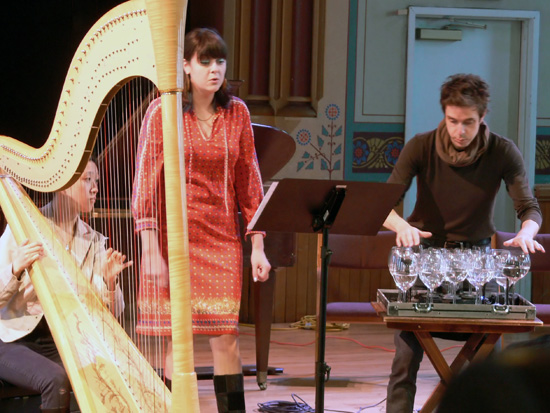 There were many more works to experience on Saturday, including an imaginative electronic installation by Brian Cook that used a wooden table as its physical interface; thoughtful installations by Lief Ellis and Scott Comanzo for audiences of one; a trio by Anthony Braxton with monomaniacal numeric text; Marc Burns’s composition combining chance, through-composition, graphic notation, and a kitchen clock; and a mix of acoustic and electronic pieces by Feng-Hsu Lee, Cenk Ergün, Todd Merrell, and Matt Sargent. Indeed, this was a festival of unpredictable and often incongruous works, but therein lay its charm.  Larger cities have so many artists and performances that one can almost always find his/her musical “clique,” but the scenes in smaller cities are often organized as much by geography as aesthetic.  And while it’s exciting to know you can find nearly any kind of a performance (no matter how specialized your tastes) in large urban markets, it’s also exciting that such wide range of artists come together in places like Hartford to create and promote work.  The strengths of these collaborative communities reside in their eclecticism: diverse events make room for varied perspectives and, perhaps, an even more complex musical dialogue.