Bricks and Mortar
NewMusicBox
Written By

How do you decide about the quality of your material? 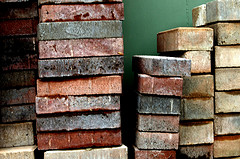 Goehr: “How do you decide about the quality of your material?”

Froom: “That’s not a question anyone can answer.”

Goehr: “It’s the only interesting question.”

This does seem like a stumper at first, but it’s one of those probing questions that begs some possibly heavy introspection. Froom said that at that moment he argued that it’s the development of musical material that makes or breaks a composition, but Goehr stood firm in his conviction that the initial material itself has to be of a high quality. It makes sense—you can’t build a sturdy brick wall if your bricks are not well constructed.

So how do you answer this question for yourself? Personally, I go through several rounds of sifting before finding the heavy-duty building blocks for a new piece. This is true whether it is an instrumental work, electronic, or both, and it involves a game of leapfrog between the left and right sides of my brain. After an initial “brain dump” of possible material, I comb through everything (which usually exists as a mix of written components—both words and musical dots—and original recordings), picking out chunks that strike me as potentially useable. At this point I’m not being incredibly picky, just grabbing for the bits and pieces that seem interesting. After that, I start to assemble the hunks of stuff into various configurations, like a jigsaw puzzle, to discover how the raw elements might fit together. At first it’s a fairly intuitive process, but as I find connections in the content, it starts to color the way other bits are mixed and matched, until I can see themes and threads starting to reveal themselves. That is when I get brutal in choosing what stays and what gets jettisoned; anything that doesn’t seem to fit into the emerging musical context gets dumped (which often means stashed away for possible future reference in another composition). It’s not an entirely cerebral nuts-and-bolts fest, and I know that if I have a strong visceral response to a musical idea—quite literally a gut reaction—chances are it’s going to work, and work well. By the time I’m finished with this stage of the composing process, I have a set of materials that I can spin along in a largely intuitive way and feel confident that what comes out next will make sense—or that I can make it make sense.

I’ve noticed that the more pieces I write, the more I also throw out during this creative phase, which can be challenging since my natural state is as a “composer of relatively few notes.” That is just one of many reasons to make sure that the elements being used are rock solid.