There’s no clearer way to see the creative thinking of a diverse group of musicians than to give them the same set of raw materials. 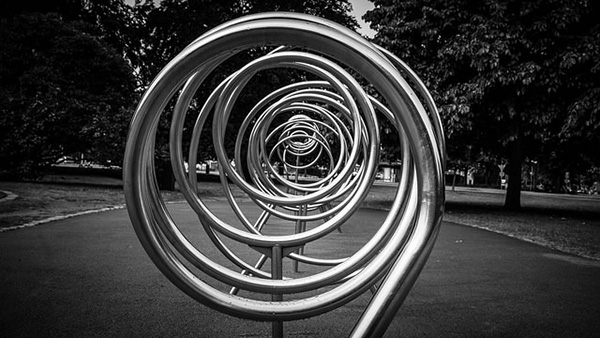 A few weeks ago, my research group at NYU hosted an event with Splice.com called Musical Shares. Everybody starts a session in some digital audio workstation. (We used GarageBand.) You spend ten minutes creating a track. Then you share it with the person to your left, and you receive a track in progress from the person on your right. You work on your neighbor’s track for ten minutes, and then you pass left again. You repeat until you run out of time. Finally, you listen to your original track and experience the requisite surprise, delight, or horror. Musical Shares is a combination of Exquisite Corpse and Telephone, and it’s a lot of fun. I subsequently tried it with my students, and it was an instant success. If you’re a music teacher, I recommend you try it, too.

A colleague of mine, Dafna Naphtali, happened to pass through the conference area where we were doing the event. Dafna is an experimental electronic musician and vocalist who runs the NYU laptop orchestra. She thought the Musical Shares concept was cool and wondered if we could dream up something similar for her ensemble. (Many interesting opportunities have come my way just from loitering around that NYU conference area.) We couldn’t think of any obvious way to adapt Musical Shares for a live performance situation, but Dafna asked me if I would try to think up something else. I’ve never written anything for a laptop orchestra, so I figured, why not.

My idea of a laptop performance is a DJ set, or some other dance-oriented form of controllerism.

Hip-hop and EDM are not what Dafna had in mind, however. In fact, her only stylistic guideline was: no beats. This was a tough one, since she was asking me to do without the sole unifying characteristic of all of the music I make and enjoy. It would have been easy for me to come up with some arbitrary set of instructions that the laptop orchestra could turn into chaotic digital screeching, but I wanted to write something that would sound “musical,” by my relatively narrow-minded notion of the word.

I had checked out the laptop orchestra during my first week of grad school. The professor who led it that semester (not Dafna) set the mood by playing us HPSCHD by John Cage. I don’t know if you’ve had the pleasure, but it sounds to me more or less like seven harpsichords being thrown down a flight of stairs. I was so horrified that I fled the ensemble and never looked back.

I believe that the job of a musician is to include people and give them pleasure, not to shock them out of their bourgeois complacency. I recognize that there are people out there who get the same pleasure from John Cage that I get from Michael Jackson, but I have no idea why. How can Cage’s work be so revered by my fellow NYU professors, while causing me such distress? Music critics and scholars have expended a lot of mental effort trying to define what “objectively” good music is. I don’t believe that anyone will ever succeed. We can never form a complete consensus, and often we can’t even come close. On Fawlty Towers, Sybil accuses Basil of “skulking in there listening to that racket.” Basil replies, aghast, “Racket? That’s Brahms! Brahms’s Third Racket!” So if quality is all subjective but you still want to write good music, what do you do? In art music, you can follow your idiosyncratic whims, or find a system and adhere to it, or imitate your teachers, or try to guess what will impress the tenure committee. In pop, you try to figure out what’s cool, or what’s going to appeal to the largest number of other people (not always the same thing). I align myself with Team Pop, because I want my music to be enjoyed by anyone—at least potentially.

Since I couldn’t use dance beats in my laptop orchestra piece, I needed to find some other way to organize it and make it listener accessible. Here’s what I arrived at. It’s called Divergence/Convergence. (Hip composers always use a slash in their titles.)

Each performer loads a short, shared sample. It should have a distinct attack and decay, for example a bell or gong. It can be pitched or unpitched, musical or unmusical.

Each performer triggers the sample repeatedly, either as a steady loop or at any arbitrary time interval.

After a few repetitions, each performer manipulates the sample as they see fit, via pitch shifting, time stretching, filtering, or other effects. Transformations should be gradual and clearly perceptible.

Once the entire ensemble is playing altered versions of the sample, the performers begin to undo their manipulations, preferably in the reverse order that they were originally applied.

When all performers have resumed playing back the original sample, the piece ends.

The shared-sample project is a mainstay of the Disquiet Junto, the internet’s most happening electronic music collective, for good reason: there’s no clearer way to see the creative thinking of a diverse group of musicians than to give them the same set of raw materials. My hope is that the shared-sample structure and the transition from uniform to disparate and back to uniform will be self-explanatory. I want the audience to be able to follow what’s happening in the music and why it’s happening, without the support of program notes or other inside knowledge. I want people to walk out of the performance saying, “I really liked that one piece where they were all playing the same bell sound.” Maybe they’ll walk out complaining about all the racket instead, but at least I can say I tried.