Keeril Makan’s Letting Time Circle Through Us and Bernard Rands’s Concerto for Piano and Orchestra (with pianist Jonathan Biss) premiered in Boston. 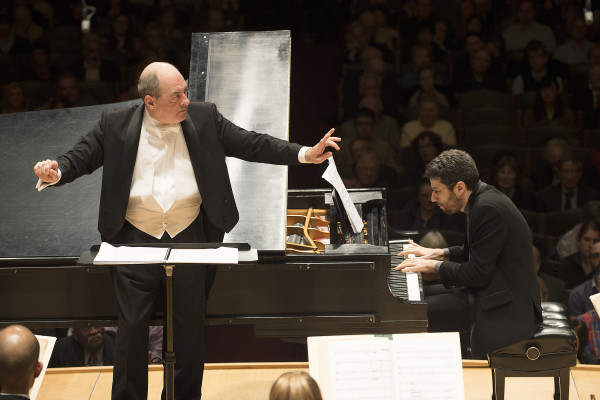 In the ever-futile quest to match up language with the experience of music, “meditative” is a useful shorthand, able to hint at a calm surface, a reflective cast, and an eloquent stillness all at once. (I’ve used it that way, certainly.) It is also, in the strictly literal sense, wrong. Keeril Makan’s Letting Time Circle Through Us really is meditative, in that, intentionally or not, it is true to the experience of meditation. It is a process and a journey, not a fixed state. And the journey isn’t always smooth.

Makan’s piece was performed by the New York-based ensemble Either/Or at MIT’s Killian Hall on April 5. It was the premiere of the full score. (The group introduced a 12-minute excerpt of the piece in Pittsburgh last fall.) Commissioned for the group through Meet The Composer (one of the last such commissions before the Meet The Composer/American Music Center merger), the work utilizes an unusual and somewhat distinct ensemble: cimbalom (David Shively), guitar (Dan Lippel), crotales and glockenspiel (Russell Greenberg), violin (Jennifer Choi), cello (Wendy Law), and piano (Taka Kigawa). It’s a sound world both ringing and atomized.

Letting Time Circle Through Us stretches a 50-minute canvas, broken up in a rondo-like way. The ritornello—almost ceremonially repetitious, marked by a rising major-second motive, a repeated, irregular inhalation—is repeatedly, sometimes suddenly interrupted by ideas that amass weight and shadow. The contrasting sections provide as much obstruction as variety, like formal parallels to the hindrances the Buddha warned about:

The practice of meditation is all about overcoming those hindrances—not by ignoring them, but instead by acknowledging them, examining them, because, to this way of thinking, by combining something bad (a hindrance) with something good (mindfulness), the good wins out.

That’s not to say Letting Time Circle Through Us is a triumphant piece. Its examination of its interruptions is dark and moody. Even the quieter contrasts are continually off balance: a 3/4+7/8 cimbalom pattern (later taken over by the piano) seeds a guitar line that upends the usual major/minor implications of the overtone series; a seemingly limpid piano loop is at hemiola odds with a string melody; a gentle gymnopedie is gradually encrusted with dense harmonies. The ostinati, more often than not, are inexact, almost-but-not-quite interlocking. (Points of arrival are less about dissonance and consonance than about a set of patterns finally settling, even into a clashing texture.) But there is a thread of optimism—that opening major second is constantly recontextualized, from a brooding, minor-scale la-ti to a hopeful, major-scale re-mi at the work’s climax.

And Letting Time Circle Through Us does, perhaps, embody the modest goal of any given meditation, that you end up a little farther along the path than when you started. Throughout the piece, the unusual instrumentation is used to constantly reimagine and translate timbres. The cimbalom’s buzz becomes a combination of guitar and pizzicato cello; piano and crotales trade their fraternal twin attack-and-decay sounds. During that gymnopedie section, Choi kept repeating the same note, but fingered on different strings. At the outset and the close of the piece, Shively and Lippell briefly utilized E-bows, an almost incorporeally delicate sound on cimbalom or acoustic guitar: in the beginning, an inchoate element, but by the end, a brief glimpse of, maybe, the instruments’ deeper natures. The way Letting Time Circle Through Us prompts and sustains that awareness is a considerable musical achievement.

The same weekend (I heard the April 8 concert), the Boston Symphony Orchestra was performing the second of its two world premieres this season, Bernard Rands’s Concerto for Piano and Orchestra, with pianist Jonathan Biss and conductor Robert Spano. (Marc Neikrug’s Bassoon Concerto was premiered last November; the BSO also gave the American premiere of Mark-Anthony Turnage’s Speranza, which it co-commissioned, in October.) The “Piano and Orchestra” is deliberate; soloist and ensemble are much more complementary than combative. A lot of the piece finds Rands reassigning traditionally “idiomatic” material to its instrumental opposites. The first movement of the concerto (“Fantasia”) opens with the orchestra pealing out bell tones of no little pianistic quality; the piano answers by taking over the orchestra’s usual function of providing sweep and saturation, filling in the spaces with ribbony flourishes of fast notes and crushed-ice chords, a bright, pixelated simulation of orchestral color. The movement’s ending—which ended up being the concerto’s biggest, most aggressive moment—punctuates a steady crescendo of volume and activity with an abrupt thump, as if piano and orchestra finally meet up just where hammer meets strings.

The slow movement uses the “Aubade” from Rands’s Three Pieces for Piano (also written for Biss), working it into a thoroughly Impressionist exploration of orchestral sustain and pianistic decay. Spano and the BSO had primed this movement well by opening the concert with the “Nuages” and “Fêtes” movements of Debussy’s Nocturnes, and Rands seemed to drop the concert back into that soundworld, right down to period details: melodies etched by doubled winds and harps; distant, buzzy muted-brass calls; catharsis via increased orchestral lushness rather than harmonic resolution. The scaffolding, though, carries hints of serialism, everything permuting out from a four-note motive that, in different guises, keeps inaugurating tentative, crystalline explorations on the part of the piano. The climax here, too, does a reversal, short brass stings giving way to the piano’s pedaled resonance. A challenge of touch and balance more than virtuosity, the movement was the beneficiary of a delicately precise performance.

The finale was built around another concept that has turned up before in Rands’s work, the sometimes paradoxical layers of time that can coexist in music. Here, the multiple layers are condensed into a single, near-ubiquitous idea: tremolos, across gradually expanding intervals, a texture that, all by itself, manages to be fast and slow at the same time. Trills were passed back and forth from soloist to orchestra, from high to low, from timbre to timbre, while bits of rhythmic cadence bounced across the stage. There was an almost insouciantly traditional cadenza—ideas from throughout the piece brought back for one last cameo—before the concerto, like Debussy’s party, seemed to drift away into the pre-dawn light.

A lot of the personality of the piece came from Biss’s particular style at the keyboard—crisp, impeccably controlled, fastidious to the point that it transcends stuffiness. But the concerto is already reticent in its grandeur. Rands, who just celebrated his 80th birthday, is still at least an honorary musical Bostonian, having spent over a decade at Boston University and then Harvard back in the ’80s and ’90s. But this piece called to mind a different civic cultural strain, the American Impressionist painters that flourished in and around New England in the early part of the 20th century—Childe Hassam, J. Alden Weir, Frank Benson, Edmund Tarbell—more concerned with capturing subtleties of light and shadow than monumental effect. The struggle and victory of the Romantic concerto were nowhere to be heard. In its place was something that, despite a wildly different vocabulary, was rather like Makan’s moods: a voyage, a passage, a span of time given significance just through the act of noticing.