Neil Young Cloaca is an irrepressible showman. Bromp Treb is an opportunity for him to apply that carnival-barker enthusiasm to a table full of mismatched gear. Cloaca circled the table, triggering highly distorted samples while playing up theatrical befuddlement, as if he was trying to decipher a recalcitrant machine—or defuse an eccentric bomb. 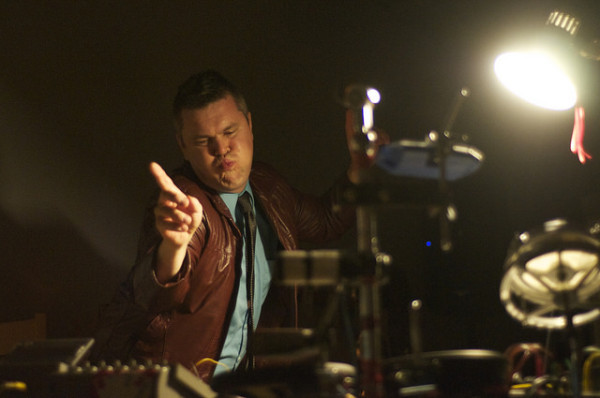 The pre-concert chatter for Bromp Treb’s June 10 show at Brookline’s Café Fixe (another in the ever-copacetic coffeehouse performance series presented by Non-Event) was all about the crowd—more specifically, the lack thereof. Even given the post-commencement dissipation of the Boston area’s academic population, attendance was looking disappointingly lean. So Neil Young Cloaca, filmmaker and noisemaker, member of the Northampton-based noise quintet Fat Worm of Error, and the one-man band that is Bromp Treb, took his microphone outside and engaged in a little old-fashioned one-on-one promotion. His one successful negotiation—convincing a couple to take a flyer with the promise that they would only have to pay the $5 cover if they stayed for longer than five minutes—was pumped through the speakers inside, becoming the prelude to his set.

In retrospect, it was the perfect introduction. Cloaca, a once and occasional concert promoter himself, is an irrepressible showman. Bromp Treb is an opportunity for him to apply that carnival-barker enthusiasm to a table full of mismatched gear: effects pedals, mixers, a sampler, electronic drum pads, roto-tom, and cowbell. Contact microphones and bouquets of wire; bits of alligator-clipped metal. An electrified tin can. A brillo pad. Cloaca treats all this stuff as a source of caprice, admitting to one audience member that the configuration of the equipment is always changing. More than once during the sound check, Cloaca let out a delighted giggle at some unexpected sound.

The performance proper began with electronic sirens and stuttering static. Some irregular, repeated subbass growls set up a couple of agogo-bell-heavy percussion loops, sliced into each other with cowbell punctuation: an atom-smashed Carnival. The line between patch and glitch was obscured; overmodulated short-circuit pops were turned, via reverb, into makeshift percussion, Cloaca’s own voice was filtered and delayed into an asynchronous house of acoustic mirrors. Throughout, Cloaca’s performing persona was on hyperactive, spasmodic display, pirouetting, pouncing, gyrating, jerking, a cross between a malfunctioning Mick Jagger and a Beckett-like post-apocalyptic last man. During one long, sparse section, Cloaca circled the table, triggering highly distorted samples while playing up theatrical befuddlement, as if he was trying to decipher a recalcitrant machine—or defuse an eccentric bomb.

Much of the sound of Bromp Treb can be heard as either a critique or a celebration of the questionable level of control we have over our own gadgets: Cloaca’s weave of cables and equipment is one designed to exacerbate rather than minimize the instability of any such network. The brush of a live wire against a powered jack; the crackle and heavy breathing of radio frequency interference; the gasoline-and-matches feedback possibilities of too many microphones and criss-crossed inputs—Bromp Treb rushes in where conventional audio engineers would prefer not to tread. At several points, Cloaca simply lifted up a corner of the table and then dropped it back down, the set-up’s fragility yielding an amplified squeal and squelch. It is the sound of the technological web breaking down, failing, consuming itself and us.
The flailing is partly an illusion, especially from the musical end: the sounds might surprise, but Cloaca knows what he’s doing, shaping long arcs and judicious transitions from texture to texture. After some mid-set banter, Cloaca geared back up for another number, this one more noisy and busy than the first: cartoon-worthy sampled drum hits, off-balance, looped beats cutting in and out like intermittent radio signals, a final crescendo into an unorthodox, whooping rave. But the theatrical narrative was similar to the first half: someone discovering, commandeering, gradually losing control of, and finally seeming to merge with a cache of computer-age detritus.

What is most notable about Bromp Treb is how cheerful Cloaca manages to make all this, especially in comparison with the often clinical aura surrounding so much electronic music performance. There is, to be sure, a streak of anxiety in Cloaca’s theater, an acknowledgement, maybe, of the fact that it has become well-nigh impossible for us to extricate ourselves from our self-created technological realm. To use the appropriate reference: we have created a monster, more accurately, a horde of monsters, colonizing every aspect of day-to-day life. But with over-the-top physicality and deliberate unpredictability, Bromp Treb holds out hope that the monsters might end up as warped and goofy as we are: temperamental, volatile, unfathomable, but genially willing dance partners. It is the most optimistic electronic racket you’re likely to hear.

Oh, and that couple Cloaca coaxed in off the street? They paid the cover.