This year’s smorgasbord of artists included a guitar ensemble from the conservatory, a one-man piano/percussion “duo,” a two-man guitar/percussion actual duo, an electro-acoustic ensemble with strings and electronics, and a band that was described as “hobbit rock.” 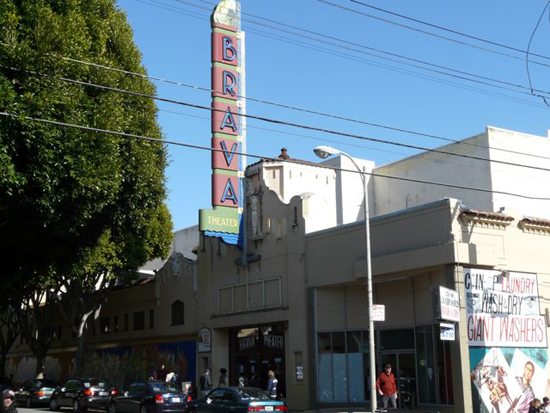 Brava Theater, as seen from the Indian food truck

The Safeway grocery store chain was among the sponsors of this year’s Switchboard Music Festival (which took place in San Francisco on April 1), donating a large sheet cake to the annual 8-hour musical extravaganza. Concertgoers were greeted with free slices near the entrance to the Brava Theater, just after receiving their entry wristbands. Verily, every performance should begin with a slice of chocolate cake.

Switchboard started in 2008 to showcase new music that sits at borders of genres. At the time, the three founders—clarinetist Jeff Anderle, composer/guitarist Ryan Brown, and composer/clarinetist Jonathan Russell—were all studying at the San Francisco Conservatory of Music. Though two of the three have since decamped to Princeton, Bay Area artists retain a strong presence in the festival’s programming, and the founders’ connection to the conservatory remains clear. 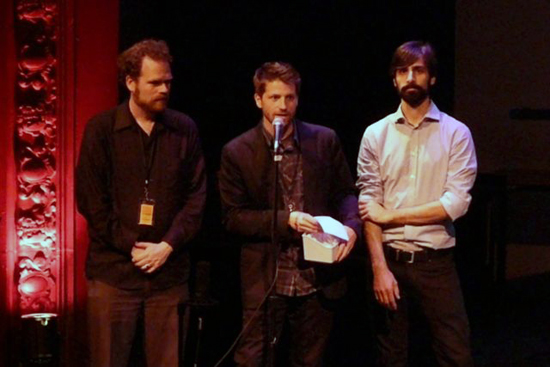 Switchboard starts at 2 p.m. and doesn’t stop until 10 p.m., at least on paper; in reality, this year it lasted quite a bit longer. Thirteen sets ran through the day on the Brava main stage, with audiences allowed to come and go as they pleased (hence the wristbands). This year’s smorgasbord of artists included a guitar ensemble from the conservatory, a one-man piano/percussion “duo” (Danny Holt), a two-man guitar/percussion actual duo (The Living Earth Show), an electro-acoustic ensemble with strings and electronics (The Hurd Ensemble), and a band that was described as “hobbit rock” (Faun Fables). Here’s the full list of performers, along with generously lengthy audio samples from nearly all them. Though the printed program provided no biographical information about any of the artists—the info is only available on the festival’s website—regular Switchboard attendees likely recognized some familiar names: both Russell and Brown had compositions performed; Anderle performed a solo set; and longtime collaborator Cornelius Boots, who played with Anderle and Russell in the awesome bass clarinet quartet Edmund Welles, performed in two sets. 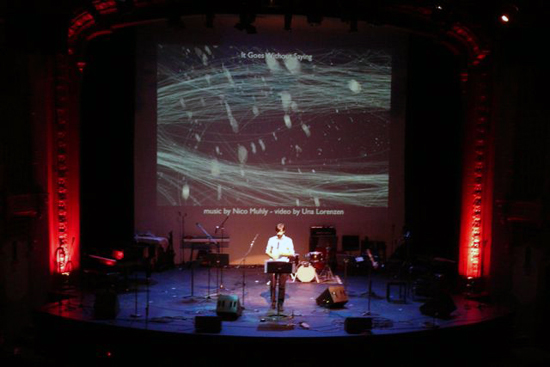 Anderle performing works for clarinet (live and pre-recorded) and electronics

When the festival was just starting out, it took place at Dance Mission Theatre, a small theater in the Mission district that normally presents dance (as you may have guessed). If memory serves, the first festival featured a mini “new music bake sale” (before such things got capitalized), where people sold homemade cupcakes and other simple concessions in the rehearsal studio down the hall from the performance space. The recent shift to the charmingly dowdy Brava Theater (still in the Mission) increased the capacity to about 350, and audiences this year were encouraged to patronize the Indian food truck parked outside, which the organizers had arranged to service the festival. As a result, the lobby was suffused with the savory smell of curry and cumin for much of the afternoon. 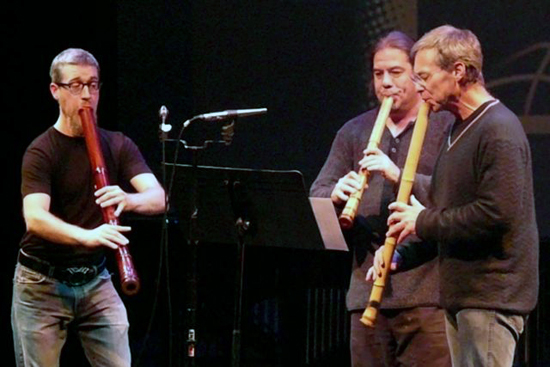 Though this may seem like a lot of info about the food situation, remember that 8+ hours straight is actually a hella long time to listen attentively to music. I was able to hear parts of 10 of the 13 sets; ironically, I missed the piece performed by the quartet Mercury Falls entitled Chocolate Chip Cookies for Breakfast, Lunch, and Dinner while I was busy refueling. Fortunately there were enough unexpected sounds to be heard throughout the day to keep the ear engaged, including a Dunstable motet performed on shakuhachis (which Boots introduced by pointing out that at the time “Japanese monks were playing shakuhachi for alms, John Dunstable was writing this”). Boots’s set was preceded by Ramon and Jessica, an endearing pair of San Francisco-based singer/instrumentalists named neither Ramon nor Jessica, performing their simple but clever folk pop songs on violin and ukulele, sometimes singing a cappella, and at one point scratching the mics with the temples of their eyeglasses.

The most unusual performance of the day to my ear and eye was Dominique Leone’s realization of Les Noces as performed by Ensemble Épouser, which was assembled specifically for this piece. Leone re-orchestrated Les Noces for two keyboards, bass, percussion, marimba, and just five singers, one of whom was a woman whose voice was digitally pitch-shifted to sound like a bass. The singers wore enormous blond wigs (the first movement is titled “The Tresses (At the Bride’s House)”) and sang in English, often with pop music inflections. The cumulative effect was disorienting and curiously fascinating—the project’s Kickstarter page calls it a “Stravinsky cover thing,” which is an oddly appropriate description. If you’re interested in hearing for yourself what this sounds like, you can either listen to a substantial sample on the Switchboard site (click the plus sign next to Leone’s name), or visit Leone’s Bandcamp page where you can stream an indescribably mind-boggling recording he released of himself singing all the parts (with pitch-shifting) plus two keyboardists playing all instrumental lines.
*** 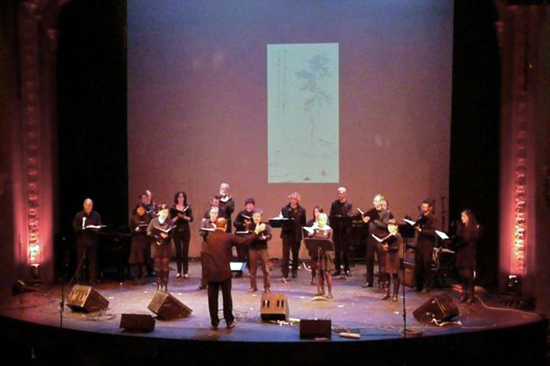 I frequently perform with Volti, one of the headliners of this year’s Switchboard Festival, and am the group’s Artistic Advisor so it wouldn’t be appropriate for me to comment on their performance (which included works by Huang Ruo and Berkeley-based composer Robin Estrada, who has had several pieces performed at past Switchboards). However, several of Volti’s singers were involved with an unrelated project late last month that would have fit well within Switchboard’s genre-blurring structure: a production of David Lang’s The Little Match Girl Passion with four singers, Butoh-inspired dance, projections, and lighting design. 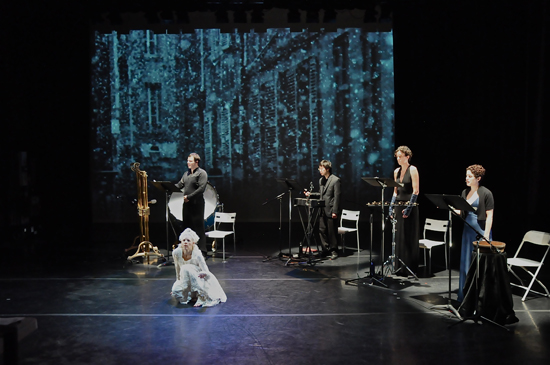 The production was presented at the ODC Dance Theater by the San Francisco Lyric Opera, a company led by conductor Barnaby Palmer and director Chip Grant, that used to produce standard repertory operas in smaller settings. It went on hiatus for a couple years and, with this beautiful and heart-rending production, the company has relaunched itself with a new focus on chamber opera and other collaborative projects.

The four singers, who also played percussion, stood in an arc with Palmer conducting at a distance. Anastazia Louise of the theater ensemble Bad Unkl Sista told the story through movement, most of the time on stage in front of the singers but occasionally moving into the audience. At the end of the performance, Grant spoke to the audience about the direct relevance of the story to contemporary life in San Francisco. He drew awareness to the plight of the homeless, a real and visible issue in the Mission where the theater is located, and announced that donations placed in the basket by the exit for a local homeless relief program would be matched by the company up to $1000—a gesture that allowed the audience to consider the evening’s moving performance in ways that extended beyond the walls of the theater.