BluePrint’s current three-concert season focuses attention on composers with roots in Latin America, though many of them (including Osvaldo Golijov, Carlos Sánchez Gutiérrez, and Roberto Sierra) currently live in the United States. Mobius Trio marks the release of their self-released recording project Last Light. 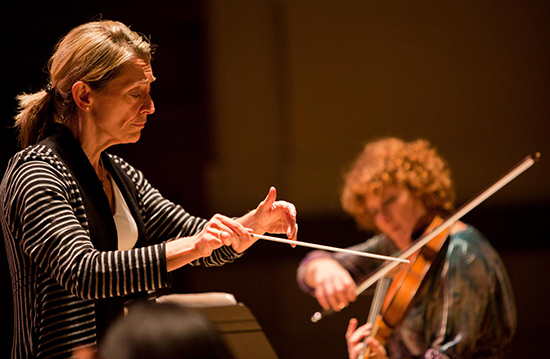 Ten years ago, conductor Nicole Paiement started a concert series based at the San Francisco Conservatory of Music called BluePrint, a new music “project” specifically devoted to performances of contemporary music. The series’ performers are drawn from both the student body and the faculty of the conservatory, while the selection of composers is not limited by the boundaries of the school’s campus. BluePrint’s current three-concert season focuses attention on composers with roots in Latin America, though many of them (including Osvaldo Golijov, Carlos Sánchez Gutiérrez, and Roberto Sierra) currently live in the United States.

The November 17 concert at the conservatory’s Concert Hall featured four works by established composers (rather than students) for chamber ensembles and chamber orchestra. Paiement led the school’s New Music Ensemble in a performance of Gabriela Lena Frank’s Manchay Tiempo, for strings, piano, harp, timpani, and four percussionists, with her trademark crystal-clear conducting style; even viewed from the audience her beat patterns were easily readable throughout this complex, mixed-meter work. Frank, who is a Bay Area native of mixed ancestry which includes a strong Peruvian influence, translates the Spanish/Quechua title as “Time of Fear,” and relates it to childhood nighttime dreams about her mother being in danger. This evocative 13-minute piece begins with the rumbling of distant thunder and, with the entrances of solo strings playing harmonics and a sweep of the harp, Frank quickly establishes a mysterious and ominous place. The work is frequently unsettling, with aggressive wood slaps punctuating the music, and small germs that expand through dramatic crescendos into intense, driving rhythmic material. The work returns to the sound of distant thunder at the end, and closes with a lone solo viola voice gently breathing a slowly oscillating major third.

Also under Paiement’s baton, a student chamber ensemble and mezzo-soprano Kelly Newberry were given the opportunity to perform the premiere of an expanded and reorchestrated version of Chris Pratorius’s Madrigal: Neruda’s Poema XX, a work that he has returned to several times over the years. Pratorius, also based in the Bay Area, is half Guatemalan and a native Spanish speaker. His affection for Pablo Neruda’s famous Poema XX, from his Veinte poemas de amor y una canción desesperada (Twenty love poems and a song of despair), is evident from his careful text setting as well as his English translation, which was provided in the program. The narrator of the poem speaks longingly of a woman loved and lost, and counter to expectation Pratorius scores the work for mezzo-soprano, with a chamber ensemble of flute, bassoon, violin, viola, bass, harp, and percussion. Pratorius’s setting allowed for clear delivery of this passionate text throughout, at times alternating vocal statements with instrumental interludes, and scoring appropriately according to the singer’s range. Inspired by Monteverdi’s madrigals, Pratorius fills the work with moments of word painting, letting the bassoon quietly deliver a melody as the poet speaks of someone singing far away, and placing the harp in the high register when the narrator mourns his loss under starry skies. The work is framed at the beginning and end by low strings and harp, quietly laying the ground for a work steeped in memory and loss.

The BluePrint series is an excellent ongoing opportunity for students of the conservatory, at both the undergraduate and graduate level, to perform contemporary repertoire, sometimes independent of Paiement, and occasionally alongside faculty as fellow performers. A student woodwind quintet presented the oldest work on the program, Mario Lavista’s Cinco Danzas Breves from 1994 (though a recent recording of the work by the Bay Area woodwind quintet Quinteto Latino perhaps better revealed the dance-like qualities of Lavista’s self-described divertimenti). David Tanenbaum, the well-known advocate of contemporary guitar music who is also chair of the guitar department at the school, joined a student string quartet for Jorge Liderman’s fiendishly challenging Aged Tunes. The late Argentinean Liderman, who taught in the Bay Area at University of California, Berkeley, originally wrote Aged Tunes for Tanenbaum and Cuarteto Latinoamericano. The student quartet gave a solid performance, though one marred by some technical issues, but it was Tanenbaum who brought out the rhythmic clarity, singing lyricism, and playfulness of the piece. 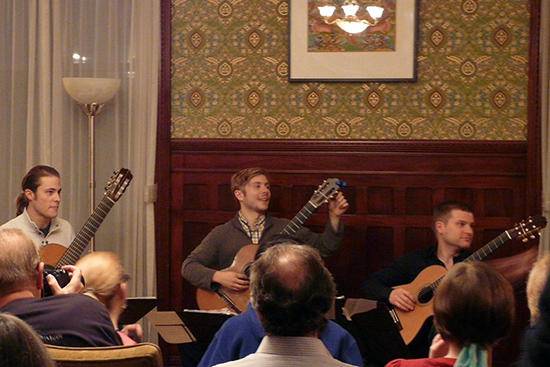 There were no such performance concerns at a house concert celebrating the release of Last Light, a new CD by the Mobius Trio, a classical guitar trio composed of three recent San Francisco Conservatory graduates who studied with Sergio Assad and Tanenbaum. In the relaxed environment of this small private event for friends, family, and Kickstarter donors (plus one party-crashing writer), the Mobius Trio gave entirely serious performances of four works from the album, which exclusively contains music written for these talented and enthusiastic young musicians. Robert Nance and Matthew Holmes-Linder play six-string guitars, and Mason Fish performs on a seven-string instrument with an extended bass range that was crafted by Gregory Byers, a well-known luthier in Mendocino County.

Nearly all of the eight composers on the album are the Mobius Trio’s contemporaries, born in the 1980s; most were also students at the conservatory. (The outlier is Dan Becker, who is chair of the school’s composition department and taught several of the other composers.) All exhibit a comfortable familiarity with the guitar’s extensive possibilities – many of these composers are guitarists themselves – and Mobius executes the dizzying array of techniques and technical challenges written for them with ease and expressivity. 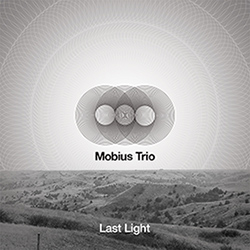 Among the four pieces performed at the house concert was Making Good Choices by composer/guitarist Brendon Randall-Myers, who lived in the Bay Area for several years before entering Yale as a master’s candidate this fall. Randall-Myers takes full advantage of Mobius’s technical versatility in this piece, constantly surprising the ear by using different parts of the finger board and the body of the instrument, exploring multiple ways of eliciting sound from the strings, building dialogues between unpitched rhythmic material and harmonic motion, and juxtaposing dynamic extremes. By contrast, a place that inhabits us by Danny Clay (also a guitarist) revealed Mobius’s lyrical playing in a personal and heartfelt work that avoided being uncomfortably earnest through unexpected timbral choices and some genuinely tender melodic writing. (Excerpts from both pieces can be heard on the video Mobius produced for their successful Kickstarter campaign, which reached its goal in just five days.)

From a performance of Persian Dances by Sahba Aminikia at the Kennedy Center.
The trio formed only in 2010, but from the unity of their playing and the constant musical conversation that is visible to the eye in performance one could easily believe that they had been playing together for much longer than that. Last Light is a self-released recording project; the albums is currently available digitally at CD Baby. Even as a casual listener I’ve returned to this CD several times this week; for those NewMusicBox readers who compose for classical guitar, you should certainly check out this album and the Mobius Trio.