If you’ve ever quickly skimmed a concert program and wondered when Kim Kardashian learned to play the viola, you’re in the right place! Kim Kashkashian’s 2013 Grammy win may have confused the mainstream media and the reality star’s fan base, but even here in the infield we could use a bit of disambiguation after a glass of reception wine. Let’s make a cheat sheet, shall we? 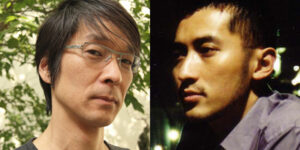 Hahn Rowe is a composer, producer, and violinist/guitarist working at the borders of rock, electronic music, improvisation, and new music. He has collaborated extensively with choreographers such as Meg Stuart and Benoît Lachambre, with musicians such as Glenn Branca, Ikue Mori, and David Byrne, as well as composed scores for television and film. He is of Korean descent. 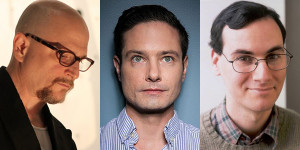 Joshua Fried performs solo live sound processing by drumming on old shoes and manipulating a vintage Buick steering wheel under the moniker RADIO WONDERLAND. His music turns bits of live commercial FM radio into remixed dance grooves, a.k.a. “recombinant funk.” If you don’t remember him from the steering wheel, you might recall his work with They Might Be Giants.

Jefferson Friedman‘s myriad works for soloists, chamber ensembles, and orchestras have been performed across the country, from the Hollywood Bowl to the Kennedy Center. The Chiara String Quartet and Leonard Slatkin/National Symphony Orchestra have commissioned him multiple times. If you haven’t heard his music in the concert hall, you may have heard his work with Shudder To Think or Matmos. 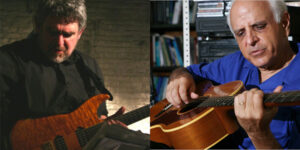 A pioneering music software developer (his work in the development of Hierarchical Music Specification Language eventually led to Max/MSP and SuperCollider), Larry Polansky is also a composer, theorist, teacher, writer, performer, editor, and publisher. He currently teaches at UC Santa Cruz and is the Emeritus Strauss Professor of Music at Dartmouth College. He is also co-director and co-founder of Frog Peak Music and the founding editor of Leonardo Music Journal.

A pioneering figure in the field of computer music (he also authored Cmix), Paul Lansky has in recent years turned his ear toward more instrumental composition for groups such as Sō Percussion and the Alabama Symphony. He spent 45 years on faculty at Princeton University, where he is now William Shubael Conant Professor of Music Emeritus. Radiohead’s Kid A quotes his very first computer piece, mild und leise. 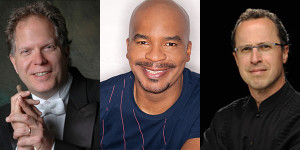 This one is even trickier!

Delta David Gier is a conductor and passionate advocate for new American orchestral music. He has been the music director of the South Dakota Symphony Orchestra since 2004.

David Alan Miller is a conductor and passionate advocate for new American orchestral music. He has been the music director of the Albany Symphony since 1992.

David Alan Grier is an American actor and comedian. We do not know his feelings about new American orchestral music. 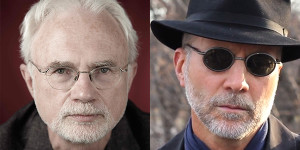 Okay, so no one is likely to confuse these guys in the concert hall, but when in doubt, look for the hat!