Before and After Listening
NewMusicBox
Written By

Before and After Listening

According to Daniel Cavicchi attentive listening is a relatively recent phenomenon, but his book Listening and Longing: Music Lovers in the Age of Barnum offers some extraordinary anecdotes of 19th century listening experiences.

“Music is all around us, it’s just that very few people actually listen to it. […] Actively listening to music may result in… more active listening. That might negatively impact precious hours spent on Facebook, Twitter, or YouTube.”
—Steve Guttenberg, “Does anybody really listen to music anymore?” (CNET, January 16, 2011)

“[T]he Western Industrial Revolution of the late eighteenth and early nineteenth centuries is a watershed moment, when attentive hearing became a newly marked practice. […] [R]elatively large numbers of people in a metropolis, often not known to each other, were asked to come together, not for light socializing or to affirm community but to seize an opportunity to exchange their accumulated cash for the experience of witnessing something novel and amusing. […] [A]ccess to the performances for the first time freed them from having to create their own music.”
—Daniel Cavicchi, Listening and Longing: Music Lovers in the Age of Barnum,
pp.21-22, 46.

Two weeks ago I mentioned that I had attempted and failed to read Mathias Énard’s 500+ page, one-sentence novel Zone during my flight back to New York City from Paris. It was the only possible way I could conceive of being able to read it in one sitting; anyone who writes a novel written in one sentence seems to be demanding his audience take such an approach. Even though I got a fourth of the way through it and was really fascinated by both the story line and the way the book was written, I have not been able to bring myself to pick it up again for nearly four weeks now since I can’t figure out how to recapture the appropriate concentration for an extended period of time.

Instead I’ve been catching up with a slew of recently published books about music. The one I’m currently in the midst of, Daniel Cavicchi’s fascinating Listening and Longing: Music Lovers in the Age of Barnum (Wesleyan University Press, 2011), has been blowing my mind. Ostensibly it’s an attempt at tracing the evolution of how people listen to music via retroactive field work, using diaries and other written commentary about encounters with music (in concerts as well as in other contexts—on the street, overheard from a nearby space, etc.) What’s been making my head spin is Cavicchi’s contention that attentive listening is a relatively recent phenomenon which is a byproduct of the Industrial Revolution and that in the United States such reverence for listening was partially inspired by the religious revivals that swept the country in the early 19th century. 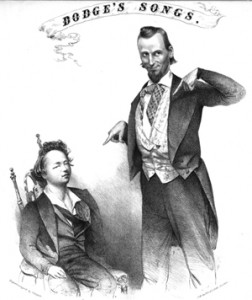 In this 19th-century lithograph, Ossian E. Dodge is able to completely capture a listener’s attention through his music,.

For me, listening to music is a process that is very similar to reading a book. Ideally, it deserves the same level of concentration. While I listen to far more music than I have time to experience completely on its own, what I treasure most are the times that I am able to give whatever I’m listening to my undivided attention—not just concerts but also recordings at home. (I never listen to music on headphones in public places.) Sometimes I’ll listen to a recording with score in hand to keep myself on task, although I used to believe that to do so was somehow cheating—it’s using your eyes to help you do something you should be doing with your ears. But nowadays I often find it much easier to focus on listening (score or no score) at home rather than in concerts. Other people (and not just coughing etc.) can be distracting and early evening, especially after a long day at work, is not always an optimal listening time. I’ve found that the best time to process auditory information is in the morning, right after I wake up; it’s even better after some tea or coffee. (Early morning is a good time to read, too.) 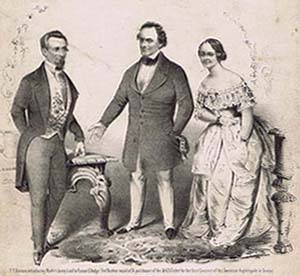 An 1850 lithograph of Ossian Dodge being introduced to Jenny Lind by P. T. Barnum

In the 19th century, however, the luxury of recorded performances that could be listened to at any time of the day did not yet exist. In fact, even concerts at a specific time were a rare occurrence. Various anecdotes describing reactions to what would have been rare interactions with music are among the greatest delights in Cavicchi’s book. One of my favorite tidbits thus far is about a man who chanced upon a marching band and was so intrigued that he followed its procession, straying from his journey in order to keep listening. That’s quite a stark contrast with the indifference that violinist Joshua Bell met with when he busked outside a D.C. metro platform five years ago. But perhaps the strangest tale I’ve come across in the book thus far is that of Ossian E. Dodge (1820-1876) who in the year 1850 paid $625 for a ticket to hear a Boston recital by the touring Swedish soprano Jenny Lind (1820-1887). That purchase, the result of an auction, made newspaper headlines since it was so extravagant. 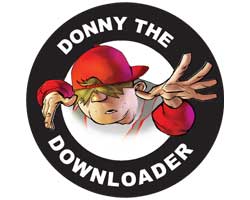 How much would Donny The Downloader pay to hear music?

In our era where downloading music for merely a dollar a song, or (as is too often the case) no cost at all, such an expenditure for music might seem beyond the pale, even for a once-in-a-lifetime live experience. Then again, according to SeatGeek, tickets for 2011’s iHeartRadio Music Festival featuring Lady Gaga averaged $1011.17 (and Cavicchi describes Jenny Lind as the Gaga of the 19th century).

But there’s more to the Ossian Dodge story than an overly inflated concert ticket. While Lind’s concert was presented by none other than P.T. Barnum, Dodge might have actually out Barnum-ed the world’s most infamous impresario. It turns out that Dodge was a musician and a composer in his own right and the whole affair was an elaborate publicity stunt designed to bolster his own career. And it worked! Dodge wound up earning five-digit figures for his performances—again, still an accomplishment in our era—and for the remaining quarter-century of his life, he was a celebrity. His obituary even made it into The New York Times, which describes him as “an excellent writer of comic songs” although none of his songs’ names are listed. (The Times, however, curiously misreports the ticket price Dodge paid for the Lind concert as a mere $500.) Dodge’s original songs are now forgotten, but several 19th-century editions of the still popular song “Bury Me Not on the Lone Prairie,” list Dodge as its composer. That attribution is likely spurious; Dodge was a notorious appropriator. The idea of making a big deal out of listening to music in order to encourage people to listen to your own music, nevertheless, is a curious M.O. that resonates strongly with me even at this late date.