Bang on a Can Summer Music Festival: A Sandbox of Sounds
NewMusicBox
Written By

Bang on a Can Summer Music Festival: A Sandbox of Sounds

We were asked to shed restrictions, open our ears, and return to a place of youthful excitement where we found our love of music; take risks, share that idea we’d kept to ourselves, and always say yes.

A montage of concerts, rehearsals, and random happenings from throughout
Bang on a Can’s 2013 Summer Music Festival.
Video footage by MASS MoCA and Zach Herchen, edited by Zach Herchen.
This past July I was fortunate enough to attend Bang on a Can’s Summer Music Festival as a 2013 fellow. The three-week event was held at MASS MoCA (Massachusetts Museum of Contemporary Art), a huge modern art museum in North Adams, Massachusetts. I wasn’t exactly sure what to expect, but a distinct vibe quickly developed during the first week: non-stop youthful creative energy. 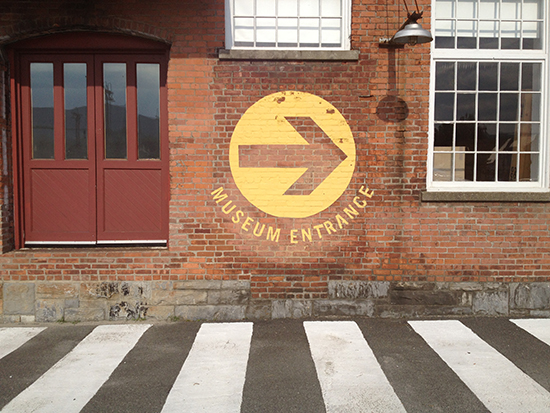 During our time together, faculty and fellows performed a large amount of music. This doesn’t simply mean that Bang on a Can programmed a lot of pieces, though we certainly dug into plenty of great works. The festival is structured in a way that encourages everyone to explore and collaborate. Think of it as half festival, half artist retreat. Daily lunchtime recitals were open for fellows to perform anything we liked in the art gallery of our choice. These concerts included improvisations, commissioned works, modern repertoire, and numerous new compositions composed by fellows during the festival. In our free time, fellows often met up for jam sessions, readings of compositional drafts, and one or two unscheduled concerts. After-hours hangouts included two karaoke nights at the local bar with a live backing band of festival participants. 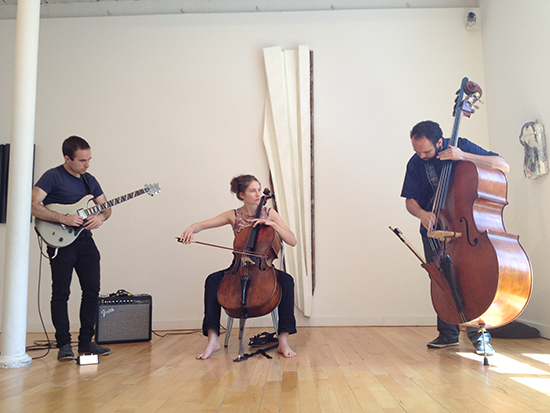 Faculty and fellows were placed into several structured groups ranging from standard quartets, to chamber orchestras, to bands mirroring the Bang on a Can All-Stars instrumentation. These groups performed ten premieres by composition fellows, daily evening recitals, and a seven-hour concluding marathon. In addition to these concerts, fellows learned and performed African drumming, Latin jazz, a sign language for conducting improvised music called sound painting, and new ways of creating music in the Orchestra of Original Instruments. 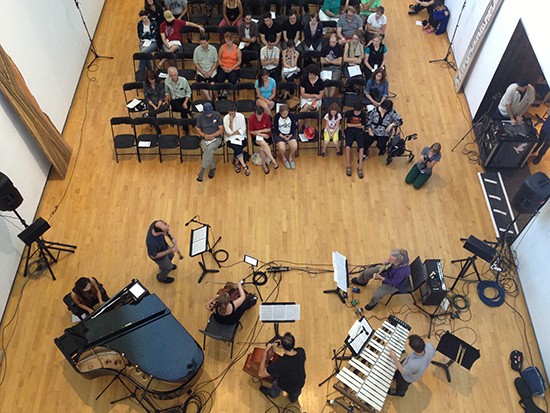 The Bang on a Can All-Stars present an evening recital in a gallery of Jason Middlebrook’s painted hardwood planks.

By asking fellows to learn and perform so much new music within a few days, we were pushed to absorb and explore, often in ways we weren’t used to doing. African drumming was taught by ear with no discussion of rhythm or meter. Latin jazz involved quick arrangements and comfort in following new ideas on the fly. Sound painting required attentive improvisation to understand directions in a sign language that was new to most of us. The Orchestra of Original Instruments asked us to explore sound creation through tubes, balloons, humming, Québécois clogging, and a variety of original instruments made by Gunnar Schonbeck. Here the music wasn’t just new—it was sounds we’d never heard and instruments we’d never played. In this environment it was natural to broaden our self-image from a specialist in one instrument to a general sound-maker. The overlapping theme of each day? Forget your expectations, discover what your peers can offer, and be surprised by what you can create. 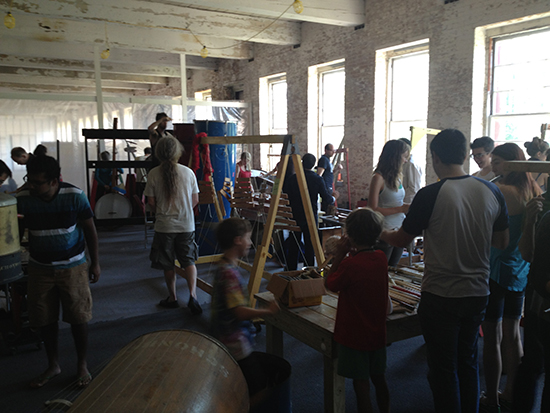 Fellows meet in an undeveloped section of MASS MoCA to explore Gunnar Schonbeck’s original instruments for the first time.

While these ideas are not completely new, it was the fellows and faculty that made them so compelling. Every style performed throughout the festival (contemporary, funk, classical, hip-hop, jazz, folk, and classic rock, to name a few) was presented with the same passion and interest. Fellows were often found trying out new lessons such as drumming patterns, sound painting symbols, and clogging in our free time. While performance technique was of the highest caliber, technical perfection was not an end in itself. Instead, presenting the best art you can and enjoying the moment was at the heart of each concert. 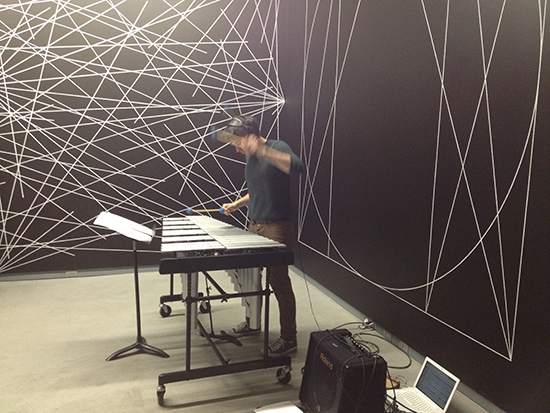 Festival fellow Joe Tucker performs a work for vibraphone and playback next to one of 105 large-scale wall drawings designed by Sol LeWitt.

We were asked to shed restrictions, open our ears, and return to a place of youthful excitement where we found our love of music; take risks, share that idea we’d kept to ourselves, and always say yes. Whether it was a rendition of “The Old Castle” from Mussorgsky’s Pictures at an Exhibition over a 3/4 drumming rhythm, playing a trumpet into a bowl of water, or overlaying Stevie Wonder’s “Superstitious” with The Beatles’ “Day Tripper,” this year’s festival was a breeding ground for projects, ideas, and new experiences. It’s easy to miss the utopian feel of a three-week music festival, and difficult to keep that energy and excitement as I reintegrate to normal life. I can say with certainty, though, that I look forward to hearing what my peers create next and feel ready to get a dream project off the ground. 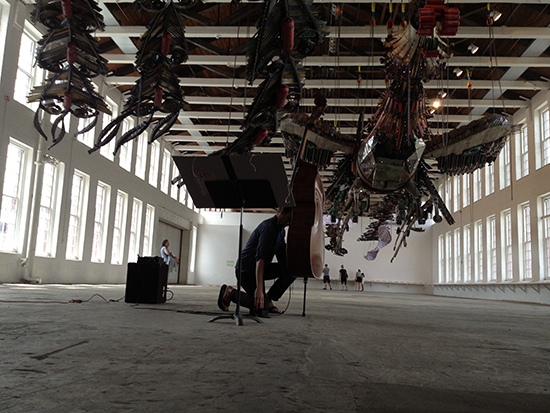 Festival fellow Ben Willis sings into his bass during a performance under Xu Bing’s Pheonix.