[Ed. Note: Composer, pianist, and bandleader Horace Silver (1928-2014) had a career that spanned half a century. As the co-founder (with Art Blakey) of the Jazz Messengers, which would become a de-facto training ground for generations of musicians, he had a profound impact on the performance practice of jazz. As a composer and bandleader, he basically defined the sound world of hard bop in the 1950s and ’60s through his live performances and numerous recordings. Between 1953 and 1969, Blue Note released a total of 17 albums under Silver’s own name plus 23 albums featuring him as a sideman, making him one of the most widely recorded artists of that period. In Silver’s later career, he continued to evolve an idiosyncratic musical vocabulary that incorporated a wide range of musical genres. Between 1970 and his last recording session on December 18, 1998, an additional 20 albums were released under his name, most devoted exclusively to his own compositions. He was named an NEA Jazz Master in 1995. When we learned of his death on June 18, 2014, we thought the best way to honor his memory on NewMusicBox was to have someone who performed with him share memories of his music and life. There will be a memorial service at St. Augustine of Hippo Episcopal Church in New York City on July 7, 2014, at 7 p.m. More details are available on Horace Silver’s website.—FJO]

I learned a lot from Horace Silver.

1978 was a good year. I recorded my first album as a leader, had my 30th birthday, and joined the Horace Silver quintet. Having the birthday was easy, unlike the other two things.

I got the job with Horace by winning an invitation-only audition. It was a two-day, old-fashioned shootout where the last man standing got the job. That guy turned out to be me, although by then I was sort of crouching rather than standing.
Horace called me that night to tell me I was hired and to give me the upcoming itinerary. I had a drink, subbed out or cancelled the gigs I already had in the book, pissed off the required number of people, and hit the sack. Horace held two rehearsals and we hit the road. 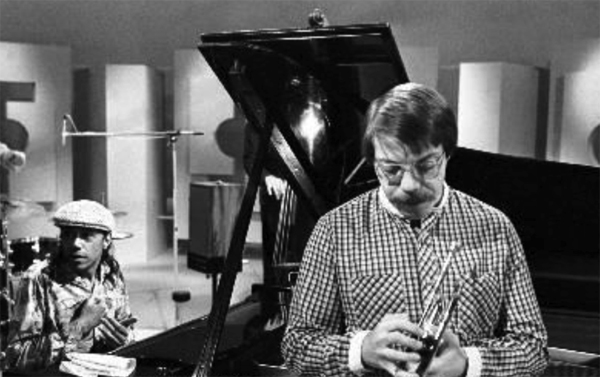 Horace Silver at the piano with John McNeil on trumpet in 1978. Photo courtesy John McNeil.

Horace wrote great tunes that have a way of improving you harmonically and rhythmically if you play them frequently (or every night, in my case). He also liked very fast tempos, and if you weren’t on top of it you’d get rolled right over.
It goes without saying, then, that I learned a lot harmonically and technically. Much of what I learned from Horace Silver, however, was not music in the technical sense. These things helped me to become a leader and turned out to be as important as improving my grasp of harmony and my execution. I thought I would share some of them with you here.

First of all, Horace believed in rehearsal. The band would never play anything in public that we hadn’t rehearsed and gotten completely ironed out. In addition, he didn’t allow you to read music on the bandstand—everything had to be memorized. He felt that reading looked unprofessional, like you weren’t prepared or the band was just thrown together.

Perhaps more importantly, Horace also felt that music stands put a barrier between the performer and the audience. Many older musicians agree with that, as do I. In situations where I have the authority, I always require the music to be memorized, and I have fired or not re-hired players who didn’t go along with it.

Horace’s book was pretty easy for us to memorize, because we either knew or had heard most of the tunes. The only real problem was when he introduced new tunes while we were on tour. We would rehearse in the afternoon at the club we were playing, and then we were expected to play the new stuff from memory that night.

If the tunes were straightforward enough, nobody had much of a problem. But Horace had started writing some quirky tunes that didn’t fall into any familiar pattern, and some would have chord changes that were essentially polychords written out like voicings. You really had to sweat to remember all the details of tunes like that.

For me, the worst one was this long composition with no solos in it. It was through-composed with some inner sections that repeated. I couldn’t keep it straight, so I asked Horace if I could take the music back to the hotel to study it and he consented. That night on the gig I put the music on the floor in front of me and studied it when I wasn’t actually playing. When we finally played the tune, I was shaky but made it through. After the set, a woman came up to me and said how remarkable it was to see someone concentrate so deeply, even between tunes. I think I said something like, “Yeah, well, it’s a gift, you know?”

Respect and musical etiquette were very important to Horace. For instance, he was a real stickler for being on time. He said right at the beginning, “I’ll never ask you cats to work one extra minute without getting paid for it. In return, when it’s time to start, you have to be onstage ready to play. Start on time, end on time, period. If you’re late, it’s twenty-five bucks.” This was still the 1970s, don’t forget; twenty-five bucks was significant.

The on-time rule also applied to getting back to the bandstand after a break. I ran afoul of this one time when I had been busy at the bar, chatting up a member of the opposite sex. All of a sudden I heard Horace play a little arpeggio and realized everyone was on the bandstand but me. I rushed up on stage and as I went by the piano, Horace, without looking up, said, “Twenty-five bucks. Good lookin’ though.”

The thing is, being on time wasn’t just some rigid rule of his. What really mattered to Horace was that being late and keeping other musicians waiting was disrespectful.

Another thing that was considered disrespectful—and still should be—was bringing your troubles to the bandstand. Whatever was going on in your life, whatever you were feeling or thinking, all of it had to stop at the edge of the stage. You bring your “A” game every time, at least in terms of effort. In Horace’s words, “Everybody else shouldn’t have to have a bad day just because you have one.”

Horace also had a lot of practical advice about things not directly related to music. For example, he said that if somebody asks for an advance, give them more than they ask for, because they’re probably asking for less than they need and then they’ll have to come back a second time. Or something like that. As a leader, I actually found that to be weird but true.

Since he was a human being, Horace Silver was not always wise in his dealings with others. He believed that if someone didn’t understand English, he could make them understand by simply speaking louder. He could be overly controlling, slow to pick up a check, quick to take offense—all the normal failings people have.

But in the things that really count, Horace was courageous and stood very tall when it was needed. He was a man of his word and always backed his musicians.

The following pretty much says it all.

Because it was still the 1970s, Horace took a lot of heat for hiring white musicians. Some in his black audiences didn’t dig the idea of any white person playing in a band led by a black man and playing black music, and they let Horace know about it.
We were playing Baker’s Keyboard Lounge in Detroit, and during a break I was standing at the bar with Horace (he was probably having a coke, I never saw him drink alcohol) and I was asking him something about Charlie Parker. Odd how you remember stuff like that!

Anyway, we’re standing there talking and this large African-American dude walks up and pushes himself between Horace and me, facing Horace and giving me his back. I remember this like it was yesterday. He said, “Horace, man, why you usin’ these white boys to play your music?”

Horace looked up at the guy and said, “I use them because they can play. Now, you’re interrupting a conversation I’m having with my friend.”

The guy left. The subject was never mentioned.