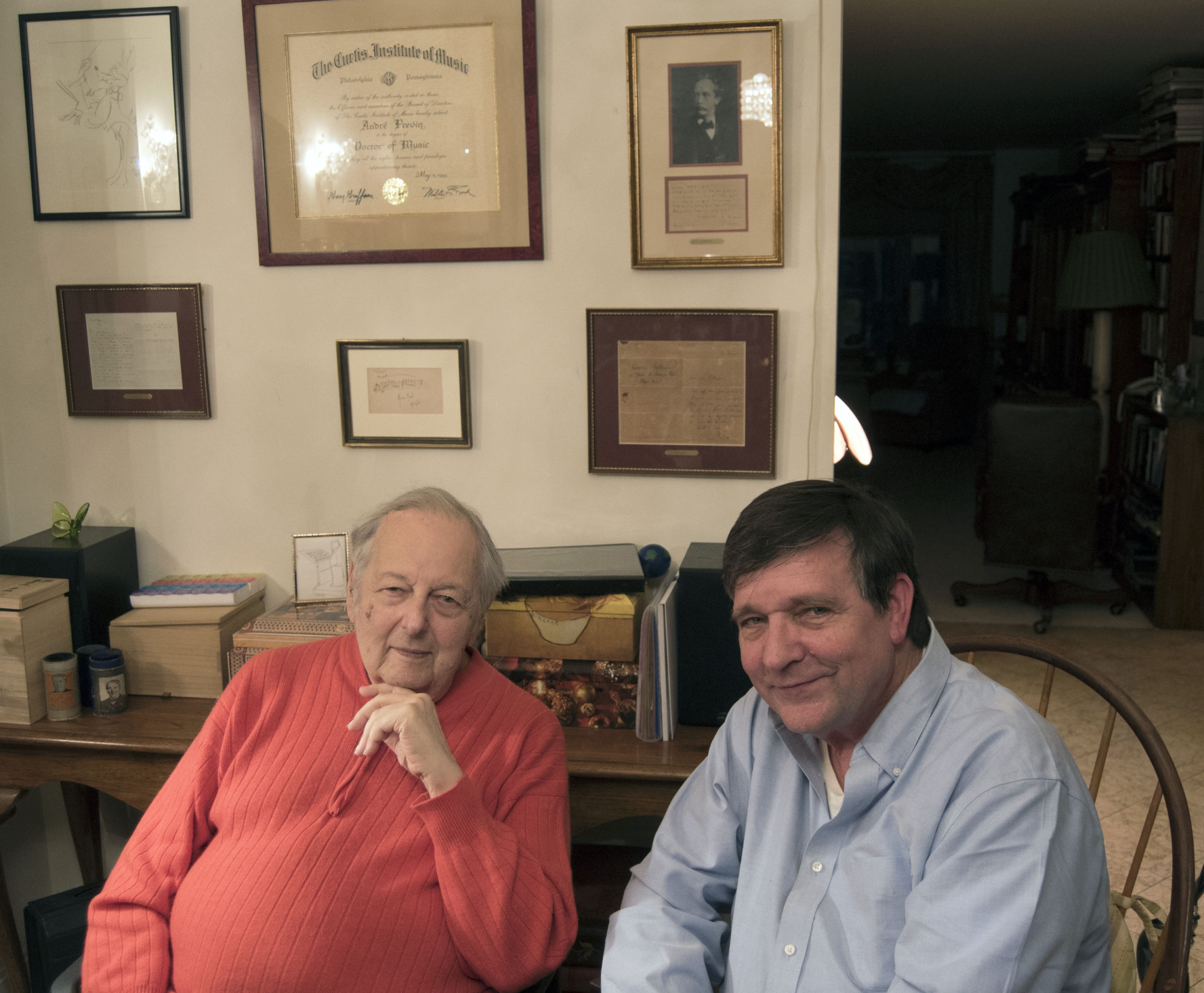 André Previn died before completing his final commission and, since his death, I’ve been absorbed in realizing it for the premiere at Tanglewood on August 3 of this year. The work is a monodrama about Homer’s Penelope, with text written by Tom Stoppard and a surprise actor in a speaking role. Commissioned by The Boston Symphony Orchestra, The Ravinia Festival, Aspen Music Festival and School, and The John F. Kennedy Center for the Performing Arts, Penelope is to be performed by The Emerson Quartet with pianist Simone Dinnerstein and soprano Renée Fleming. Now that it’s in shape to get to rehearsals, I have time to think and write about André.

André Previn kept his four Oscars on the floor behind chairs at the dining table.

I think of the years I spent with André with great joy. His deep musicianship accrued many accolades, yet he was unassuming, if pleased, about the honors and awards. He kept his four Oscars on the floor behind chairs at the dining table. At Christmastime he’d tie red ribbon bows around their necks; a half-dozen of his Grammys were piled on a high shelf gathering dust and tarnish while his OBE and Presidential Medal of Freedom were sometimes out and other times in a drawer somewhere. If one asked, he would show them with pleasure, but it was conversation about music, and playing it, that most animated him.

He was a musical polymath with great curiosity and knowledge of all manner of music. Some, knowing only the externalities of his musical life, may be surprised at the breadth of his curiosity. Once when I went to see him he opened with, “Do you know the music of Wallingford Riegger?” “Yes,” I said. “Well, it’s devilishly difficult. I’ve been studying it, and I’d never write anything like it but it’s fascinating!” I never heard him disparage any other composers or styles of music; the worst he would say was, “I admit that the very experimental music, I just don’t get it. And I get nervous when it gets played because I don’t know what the point is.”[1] Interestingly, he was much more free in his critique of movie music, especially from the movies he’d watch on TCM during bouts of insomnia. He once recounted to me how he had turned on the channel and watched a movie, becoming enchanted by the music. He wanted to get to the closing credits so he could see who wrote it, and it was he! He got a good laugh out of that.

Commission or no, André was always writing. He was always looking for things to write for Renée Fleming, and he wrote all manner of works for Anne-Sophie Mutter because he loved the way she played. Let him speak to this:

…[I]t was Carnegie Hall. They were doing commissions for an anniversary. And they said they wanted me to get together with Toni Morrison. And I said, ”Wonderful!” And I wrote some songs with Toni Morrison’s words. And I played them for Anne-Sophie and she said, ”Will you write me something?” I said, ”Sure. I’d love it.” And I wrote her a piece called Tango Song and Dance, which has been done a lot, and I never looked back. I’m always writing something for her; always. And she always plays them. It’s very dear of her.[1]

And … with Renée, my recommendation to all composers is, if they write something for voice, write it for Renée.[1]

André hated writing program notes; he always preferred letting the music speak for itself. However, there were times when he felt very pressured to do so by commissioners. One time, he came into the office complaining about needing to write a program note and I fed him a line to start one. He looked askance at me and we continued speaking about his next commission. About five minutes into that, he stopped, looked at me, and gave a second line. From there we were off and running, composing a program note which was fabricated out of whole cloth and which, not surprisingly, figured in the newspaper critic’s [positive] review. That always makes me think of Martha Graham renaming the piece Aaron Copland wrote for her; the myth of the music which her name engendered carries to this day. Years later André would tell the story of that note as if it were the honest truth; who knows, maybe he sublimated it.

He was also extremely sparing with tempi and dynamic markings. I often get phone calls or emails at work telling me there’s been some kind of printing error because these things are missing. On one of his orchestral works the opening tempo is “Tempo I”. In another there’s no opening tempo at all. I had a phone call from a conductor about that latter one while André was in Japan. He wanted to know what the opening tempo was. I told him to hold on a minute while I got the score. I started reading and turned to page 2 where there was a run in the clarinets which made me think, “too fast.” I started again, then told the conductor, “I’d say about q = 108.” When André returned from Japan I called him and asked him what speed he’d opened the piece at when he conducted the premiere. He thought a moment and said, “I think around q = 112.”

I always thought André just trusted that people who were schooled in the same art and discipline as he would be able to infer from his scores what he wanted. I like that idea. But when I asked him specifically about this habit he said:

Well, you see, I learned as a conductor, if you’ve got a good player playing, leave ‘em alone. First. And then if he does something that you don’t like, then you can suggest, not tell him, maybe a different way. But there are so many conductors I know, really good conductors, like [deleted] is a marvelous conductor, but he used to, you know, the first chord, ‘No, no, no!’ Please, let them play, because they’ll fix something long before the conductor will anyway.[1]

André Previn just wrote for the love of writing. He never revised…

He also just wrote for the love of writing. He never revised, and if he didn’t like a piece he’d written he wouldn’t have to hear it again so he’d just go on to the next one. He once told me, “I write music I like; I don’t expect it to last.” But he did admit to liking some of his music: He liked Owls, “And I liked two of the three trios that I wrote. I wrote a trio for oboe, bassoon, and piano, and I like that. That was a long time ago. It was very Poulenc-like. But I enjoyed that very much. I don’t know, I’m so primitive.”[1] André was generally loath to name works of his that he liked, and was generally dismissive of many things he’d done–or, a la Schubert, he’d ask, “I wrote that?” Still, I know from other conversations that besides the Poulenc-like trio, he was quite fond of his Violin Concerto [the Anne-Sophie] and the Nonet (which he also wrote for ASM), as well as Honey and Rue and Every Good Boy Deserves Favour. André also very much liked his operas A Streetcar Named Desire and Brief Encounter. I would personally add to my favorites list the Harp Concerto (which he enjoyed at the time), and I think both the Concerto for Orchestra and Penelope, which are yet to be premiered, will be keepers as well.

The other André, of the popular world… I once told him I had found his album, A Touch of Elegance, at a Goodwill store near his apartment. He asked me how much I paid for it. I told him, “a dollar” and he immediately said, “Oh, you paid too much.” And he meant it. There was much schmaltz in those days. Then there was his long relationship with Oscar Peterson, whom he admired greatly:

Oscar Peterson was some kind of really towering pianist. My God.…he liked me and we were friends. And the last time he played at a club in New York was at the Blue Note. And I went to see him. And they gave me a table which was as far away from the piano as I am from you [about three feet]. And Oscar played, played his usual amazing things, and he looked up and he saw me. And he stopped and he pointed me and he said, “I thought I got rid of you.” Nice. Nice compliment.[1]

If you’ve never seen the BBC4 hour-long show with André interviewing, and then jamming with, Peterson you should look it up on YouTube; the complete show is here:

I’m cueing and extracting parts from Penelope now. Soon we’ll start rehearsals for the premiere. It will be a pleasure to “speak” with André once again.

Other quotes from memory.