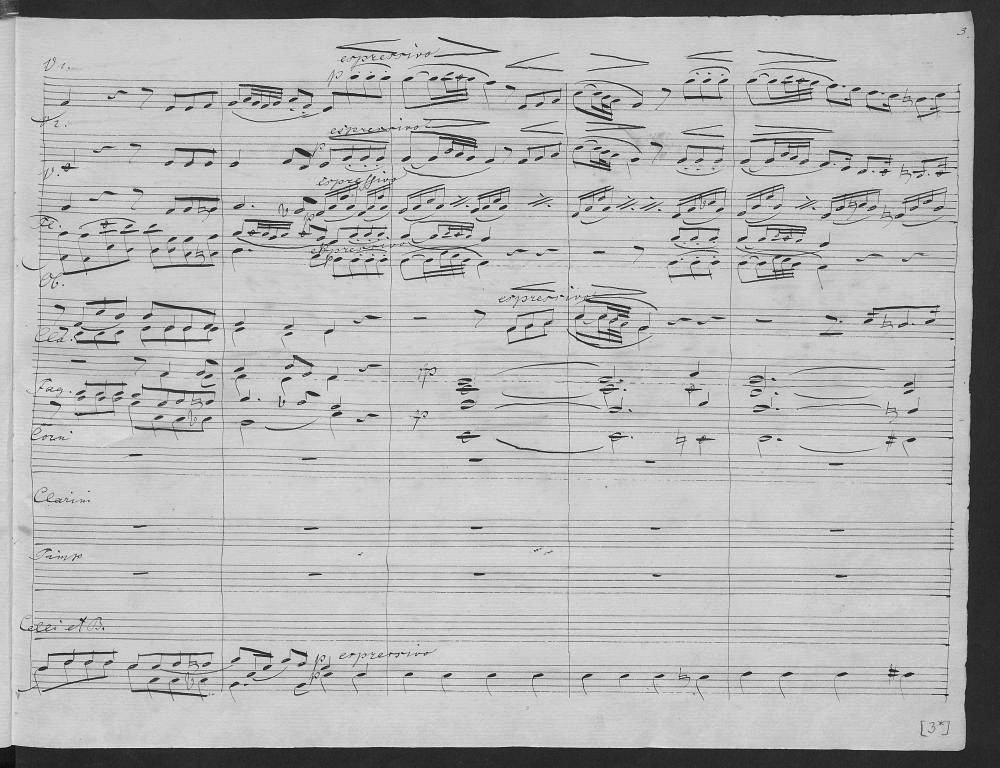 It is mid-August. In my profession (I teach college-level composition and music theory), that means it’s time to get down to the less lofty aspects of course preparation: ambitious ideas must be reborn as precise learning objectives, clear evaluation criteria, detailed weekly schedules, and finalized repertoires. As I comb the internet for pieces to use in the introductory orchestration course I will teach for the second time this fall, I am reminded of a familiar frustration: it is easy to find scores by white men, and much harder to find scores by anyone else.

Yes, IMSLP offers an ocean of free sheet music, and that’s to say nothing of the more carefully curated online resources such as Music Theory Examples by Women and the Composers of Color Resource Project. But this apparent abundance can obscure the many omissions. Looking for the full score of Samuel Coleridge-Taylor’s Ballade in A minor for Orchestra? The piece was composed in 1898 and begins with a stormy opening theme — a perfect example of how to subtly strengthen the melody in a passage scored for low strings. (Can you hear the lone bassoon doubling those violins?) Yet, on IMSLP, you will find only piano reductions of nearly all of Coleridge-Taylor’s orchestral works. A full score for Petite Suite de Concert, Op. 77, is the lonely exception. Curious about delving into the orchestral works of Louise Farrenc? Her three symphonies, all written in the 1840s (easily old enough to be in the public domain) are nowhere to be found on IMSLP.

It is true that with a bit of determination and more than a few disposable dollars, these scores can be acquired: Musikproduction Hoeflich offers in its “Repertoire Explorer” series an edition of Coleridge-Taylor’s Ballade for a reasonable 18€; I eagerly bought it, but I’d have to think twice about requiring my students to purchase a copy unless I could find a way to make it a primary text for my course. In contrast, one must shell out over 150€ for the Hoffman/Heitman edition of Louise Farrenc’s Symphony No. 3, rendering it highly impractical at best for classroom study.

I am grateful that these recent editions of long-neglected works exist, yet I can’t help but lament their inaccessibility, especially when compared to the ubiquity of freely available scores composed by white men. The simple question of why — why are Robert Schumann’s symphonies from the 1840s accessible at no cost for anyone to study and perform, while Louise Farrenc’s symphonies from the same period are behind a costly paywall? — is an important one, but it is related to a larger truth: music educators who wish to fundamentally rethink their content often face significant practical challenges in the simple matter of accessing viable learning materials. The last few decades have seen significant progress toward building web-based resources for inclusive music pedagogy, yet there remains in many disciplines a lack of adequate resources — a major disincentive for teachers wishing to move beyond inherited repertoires and perspectives. In perhaps no musical discipline is this absence more glaring than in the study of orchestration.

Orchestration as an academic study occupies a nebulous place, residing somewhere between composition and music theory, two fields which are themselves often grouped together. (As an example, I teach in my conservatory’s Composition and Music Theory program, where all music theory courses are listed under the same “MCOM” prefix.) My introductory orchestration course that starts next week will include student composers, performers, and music educators. For many of them, this class may represent their most sustained exposure to full musical scores for mid-sized and large ensembles, so the choice of composers studied in this context could profoundly influence their notions of whose music is worthy of study. (For a fascinating and bracing study on this topic, see Cora Palfy and Eric Gilson, “The Hidden Curriculum in the Music Theory Classroom.”)

Textbooks wield a special kind of power in perpetuating the canon of composers that still dominate the music academy, and music theory textbooks have been heavily scrutinized in recent years. In his Music Theory Online article, “Music Theory and the White Racial Frame,” Philip Ewell provides a racial demographic breakdown of musical examples in seven leading music theory textbooks, in which he reveals that, “of the 2,930 musical examples in all seven textbooks, 49 were written by nonwhites. This represents 1.67% of the musical examples from all textbooks.”

There is not a single example composed by a non-white woman in any of the books. In contrast, Hector Berlioz’s Symphonie Fantastique is used in 10 separate instances, while Johannes Brahms’s First Symphony and Claude Debussy’s La Mer are each cited 9 times. The outsize representation of these familiar works extends to the disproportionate attention lavished on the expected composers. Mozart leads the way with 18 pieces featured in Adler’s The Study of Orchestration, followed by Beethoven at 17, then Ravel, Strauss, and Stravinsky at 13 each, with Tchaikovsky, Bartók, Brahms, Mahler, and Richard Wagner rounding out the tidy list of ten composers with 10 or more pieces in the Adler book.

The racial and gender identities of the authors of orchestration textbooks are even more lopsided than the identities of the composers whose music populates the book. I could not find a single comprehensive orchestration manual authored by someone other than a white man. It’s worth noting that Blatter’s Instrumentation and Orchestration includes an unusually thorough bibliography containing related resources that reflect perspectives other than those of white men, including books on the history of the orchestra (Joan Peyser, ed. The Orchestra: Origins and Translations, New York: Schirmer, 1986), volumes on instrumentation (Sibyl Marcuse, A Survey of Musical Instruments, New York: Harper & Row, 1975), and several manuals about composing for individual instruments. And the internet offers numerous excellent tutorials on composing for individual instruments, such as Heather Roche’s excellent blog on contemporary clarinet writing. Yet when it comes to lists of books and blogs on orchestration, most look like this and this.

I gave a talk at this year’s Society of Composers National Conference called “Tossing the Textbook and Decentering the Canon in an Introductory Orchestration Course.” The talk focused on my efforts to move beyond the traditional orchestral literature in my orchestration class by relying on evidence-based pedagogical practices, such as using backward design, creating the conditions for meaningful student agency, and providing and receiving effective feedback throughout the semester. The pedagogy portion of the talk was met with a shrug; I was preaching to the choir about the why. How was another matter. The issue of access to scores and the challenge of finding adequate learning materials — along with the stark demographic statistics I provided about the orchestration textbooks — sparked engaging and sometimes passionate discussion.

So, what of the pieces that are old enough to be in the public domain, yet are still nowhere to be (freely) found? Why is IMSLP full of Robert Schumann’s orchestral scores but devoid of Louise Farrenc’s, replete with Gustav Mahler’s symphonies but virtually empty of Samuel Coleridge-Taylor’s? Farrenc’s three symphonies were written in the 1840s, but the Hoffman/Heitmann critical editions were published between 1998–2000 and thus will remain protected for decades. Unless you can get yourself to the Bibliothèque nationale de France to peruse the original manuscript of Farrenc’s Symphony no. 3, or to the Philadelphia Free Library’s Fleisher Collection to pore over the microfilm, the critical editions are the only game in town. Similarly, many of Coleridge-Taylor’s orchestral works are available only as recently published, and sometimes costly, critical editions.

These critical editions are invaluable resources; their editors deserve to be credited and compensated for their expertise. I only seek to point out that, as of today, I can choose to invest in Schott’s critical edition of Robert Schumann’s Second Symphony but I can also access many earlier editions for free. I don’t have that choice with much of the music of Samuel Coleridge-Taylor and Louise Farrenc for the simple reason that their orchestral work wasn’t thought to be worth publishing until relatively recently.

Some editors and publishers are working to make these scores more accessible. The French site ComposHer strives to increase access to scores by women composers; its recent edition of Emilie Mayer’s Faust-Ouverture is freely accessible under a Creative Commons license and includes a full set of parts. Another publisher, Serenissima Music, restores and digitizes original editions of hard-to-find pieces and posts them to IMSLP; it is courtesy of Serenissima that we have access to the full score of Samuel Coleridge-Taylor’s Petite Suite de Concert. (Serenissima has also partnered directly with IMSLP to print and sell physical copies of some of these reprints under the Petrucci Library Press imprint.)

We should feel a sense of urgency to join these efforts to make more scores of public domain works accessible. Imagine the possibilities for cross-disciplinary student projects devoted to creating usable and accessible editions of scores for Emilie Mayer’s first and second symphonies, or modern editions of Vicente Lusitano’s book of motets, Liber primus epigramatum. These projects would bring together music scholars from various disciplines and would galvanize students and faculty toward a common and profoundly meaningful goal.

We also must continue to demand that new textbooks do a better job with representation. Though alternative learning resources exist, textbooks continue to be important and influential forces in defining the values and boundaries of a discipline. It is encouraging that W. W. Norton has contracted Rosa Abrahams, Philip Ewell, Aaron Grant, and Cora Palfy to write a new music theory textbook, The Engaged Musician: Theory and Analysis for the 21st Century (projected 2023), which Ewell describes as “a modernized, reframed, and inclusive textbook based on recent developments in music theory pedagogy.” The field of orchestration is in dire need of a similar textbook, with the backing of a publisher willing to help with the costs of reprinting copyright-protected musical excerpts by BIPOC and women composers in addition to curating selections from the public domain.

So many of our students and colleagues want to move beyond the canonic composers. Let’s keep working to get them the resources they need.