The No Idea Festival started its second decade of improvisation with six shows over a four-day period in Austin and San Antonio. Founder Chris Cogburn assembled another amazing collection of performers this year, drawn from across the country as well as Mexico.

The No Idea Festival started its second decade of improvisation with six shows over a four-day period in Austin and San Antonio. Founder Chris Cogburn assembled another amazing collection of performers this year, drawn from across the country as well as Mexico, where Cogburn spends part of the year performing and working in the improv scene.

The festival is a place for performers to develop the relationships started at previous No Idea gatherings and to develop new ones with artists of all stripes, and to that end this year’s lineup included—in addition to the musicians—a writer, a dancer, and a clown. 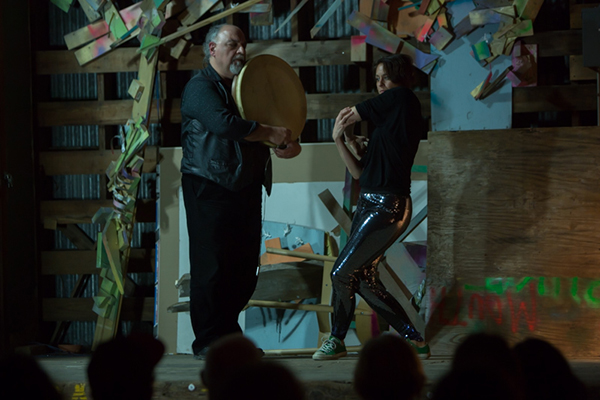 The stage at the Museum of Human Achievement extended to the right of the audience to an intermediate area which served as an open stage-left for this performance and as a connector to another stage used for the second performance, a sort of lazy Z which faced and flanked the audience. Following a brief introduction by Cogburn, Michael Zerang and Julie Nathanielsz opened the third evening of the festival with a collaborative sound and movement performance. Nathanielsz stood completely still as Zerang, seated at a trap kit to our right, produced a series of breaths and tweets from a recorder. As this texture developed, Nathanielsz shuddered and shook, moving more while standing in place than she did when she crossed the stage. In response, Zerang began rubbing something across the head of one of his drums creating a wonderful keening counterpoint to the recorder. I couldn’t make out what he was using, but as he stood up with a frame drum and began walking towards Nathanielsz, it seemed as though he was getting way more vibrating mileage out of that drum than he should have been able to. As he got to the front of the stage, it became clear that he was using something which, when moved across the drum head, drove it like a speaker, ramping up the timbral and temporal possibilities. When I asked Zerang the specifics of the four-inch oblong whatsit, he said, “Well, this is what we call in music a ‘vibrating device’.” I couldn’t help but think that that’s what they call it in any number of fields.

Bonnie Jones and Juan García performance from another festival set.
For the most immersive experience, listen with headphones (though be prepared for the sonic peaks and valleys).
The second set was quite representative of the local meets national meets international flavor of No Idea. Austin-based guitarist Parham Daghigh was joined by cellist Aimée Theriot from Yucatán, Mexico, saxophonist James Fei from Oakland, and No Idea regular Bonnie Jones from Baltimore. As the crowd settled into their second stage seats, Fei began breathing through his instrument, the sound dovetailing with the audience noise. As the last of the latter subsided, Daghigh began applying pressure to the lower strings of his electric guitar, forcing them to touch the pickups and creating a sharp, popping sound. This sound had a slightly different quality when the strings detached from the pickup’s magnet, and the two sounds came across like a telegraph. Theriot joined in with slow, short, quiet glissandi on the C string over a small range, and these low moans made a bed for Jones’s electronic high-pitched echoes.

Jones’s setup allowed her to open and close a variety of circuits with an instrument cable, and while these connections and disconnections fell in the same A/B tick-tock world as Daghigh’s pickup manipulation, they were in a completely different timbral sphere, hers sharp and brittle and his warm and rounded. Jones’s foreground opening gesture became background as Theriot shifted to harmonics, still soft but taking the lead by virtue of their tessitura. Fei picked up on this shift as his breathing was broken up with jagged, pitched attacks. All of this was actually quite quiet and largely pointillistic, so much so that when Daghigh began to use a paintbrush across the strings the windlike continuity of the sound was particularly striking.

Perhaps it goes without saying that none of this music was really living in the twelve-note-to-the-octave world, but occasionally a conventional collection would show up. A beautiful Phrygian moment occurred when Fei picked up on a beating texture between two waves which Jones created. He cruised a half-step above the pitch and back down again, and in context of the surrounding material it had a decidedly tonal character. The group volume increased in a heartbeat, remained so for a brief period, then died down to its former level, all of this occurring together so tightly it almost sounded rehearsed, though it wasn’t. A few final clicks from Jones signaled the close of the set. 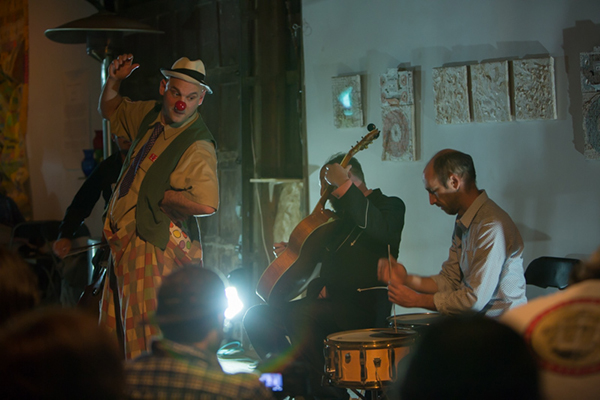 Aaron Tucker is a circus clown and member of the trio Perruque with Chris Cogburn on percussion and guitarist Kurt Newman. Bassist Juan Garcia joined the group for the third set of the night. I’ll take a moment here to say that my knowledge of clowning begins and ends with the handful of circus shows I saw as a kid, so I was quite interested to find out what would happen.
I’ve seen several No Idea shows over the years and the sets typically fall into two broad categories; the first is a fairly democratic group composition, while the second has a leader of sorts. In this set, the clown took the lead. And he was spectacular. It wasn’t slapstick or pratfalls that made it work either, he was just really good at working the audience and communicating with the other performers. Newman kicked off the set with light pick scraping on the strings while Cogburn rubbed the head of his snare, providing a hollow counter to the bright string sound.

Tucker (dressed the part with big checkered mu-mu pants, a wide and too-short purple tie, a little vest, the big clown shoes, a clown nose, and a mini pork-pie hat perched atop his large bald head) began to respond to these sounds, eventually grabbing a folding chair from the audience and threading his substantial body through it. A bit of Danger Music, no doubt. Garcia played off Tuckers movement, not exactly mimicking it but using his gestures to inform the pulsing gestures coming from the bass. Cogburn pulled out a cymbal which he placed at a 90-degree angle to the snare drum. This was a new one for me, and the sounds generated by dragging the cymbal across the snare seemed impossibly deep and thrumming.

Tucker made his way through and around the audience, sometimes sitting down among us or on the stage. My guess is that I was not alone in my return to childhood, and a few audience members couldn’t help themselves, occasionally interacting with Tucker and the band via crinkly water bottles and the shuffling of chairs. The players were able to interact with his movement without the whole thing turning into foley art, but the audience was not so talented. Fortunately, the performers were able to soldier on even as the audience attempted their own fourth wall excursions. 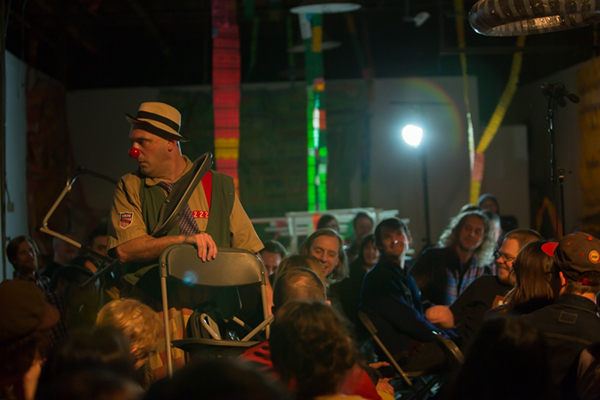 Unfortunately I was unable to stay for the fourth set, but honestly any one of the sets I saw that night could stand alone as a satisfying concert. Cogburn has created a perfect setting for improvisers and audience to experience a variety of distinctive collaborations. Year after year, artists return to Austin to reconnect with those they’ve shared sets with in the past and to make new noise with strangers. Whether in the audience or on the stage, the experience is a perfect antidote to so much of our repeatable, re-tweetable culture—a series of gems created in real time.