When considering new directions in music education, examining how students are taught is important, but so to is developing ways to reach students who otherwise might not have the opportunity at all. Through El Sistema, hundreds of thousands of Venezuelan musicians have been educated over the past three decades; El Sistema USA is now providing ensemble music lessons to thousands of underserved students throughout the US as well.

Video by John Elliot
When considering new directions in music education, examining how students are taught is important, but so to is developing ways to reach students who otherwise might not have the opportunity at all. Many youth ensemble directors will tell you that if they could choose one characteristic in their students it would be enthusiasm, and my conversation with conductor/composer Hermes Camacho revealed a group here in Texas that has that particular attribute in spades. Camacho is on faculty at Austin Soundwaves where he conducts the wind ensemble, teaches violin, and coordinates the theory program. Austin Soundwaves is part of El Sistema USA, a “support and advocacy network for people and organizations inspired by Venezuela’s monumental music education program.” Through El Sistema, hundreds of thousands of Venezuelan musicians have been educated over the past three decades; Los Angeles Philharmonic Music Director Gustavo Dudamel is perhaps its best-known graduate. Growing from just a handful of programs in the US to over fifty in just a few years, El Sistema USA is now providing ensemble music lessons to thousands of underserved students throughout the U.S. as well. 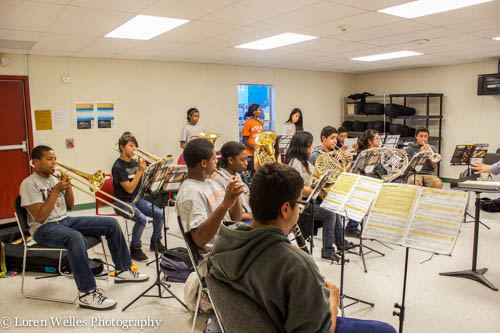 Andrew Sigler: When did El Sistema come to the U.S.?
Hermes Camacho: I’m sure the ideals of El Sistema have been felt in the United States for quite some time, but the 2008 formation of the Baltimore Symphony Orchestra’s Orchkids program is generally recognized as the spearhead of the El Sistema USA movement. There are only about 35 programs in the country and only three in Texas. We are in our third year and this is my second year. It’s been great to be a part of something that is still new in that I’ve been able to have a lot of input and a real hands-on experience.

AS: How does one go about starting a program like this?
HC: There’s no official certification, but our program director Patrick Slevin completed the Sistema Fellows program at the New England Conservatory where they are fully immersed in the teaching culture and philosophies of El Sistema.
AS: What are those philosophies?
HC: I think of El Sistema-inspired programs like Austin Soundwaves in much the same way you might think of the Boys and Girls Club or other similar organizations which are focused on youth development, but in this case music is the vehicle. It’s a really amazing program; I gush over it, honestly. The staff and kids are great. It goes to show you that no matter what socio-economic background you come from, the reaction to music is the same. Often after a concert I hear, “I missed all those notes!” to which I respond, “No one noticed those, they heard the good stuff!” I’ve found that no matter if they come from a musical family or not, the kids have the same concern and drive to do it right.
AS: Are there particular similarities/differences between the original program and what Austin Soundwaves does?
HC: The emphasis on ensemble playing is shared between the two. It’s more about everyone coming together and working as a group. We teach sectionals, which are essentially group lessons, and last year started a music theory program which acts as a basis for fundamentals. I can count on one hand the number of students who have private lessons outside the program, so virtually all their music education occurs in-house. Also, Soundwaves has actively pursued new music opportunities for the students. Between performances at the Fast Forward Austin festivals in 2012 and 2013, as well as several premieres of new works for band and orchestra in the last year, we have made a point of bringing plenty of new music into the mix. Patrick and I have spoken about this on occasion, and he doesn’t know of any other El Sistema-inspired program that has as much new music activity as Austin Soundwaves.
AS: Are they doing any private lessons through Austin Soundwaves? Is there a private element to it?
HC: There is to a certain extent, but it’s not part of the structured curriculum. It’s really informal; if a student needs extra help for an audition or on their orchestra music they arrange to work it out with the teachers.
AS: Where is the program located?
HC: It is based at East Austin College Prep, which is a charter school. It’s co-ed and completely free and a big part of their goal is to provide opportunities to underserved communities of east Austin. Their emphasis is not only on getting students through high school, but getting them to attend and graduate college. In particular, it’s the goal of the Hispanic Alliance for the Performing Arts (HAPA), the non-profit organization that oversees Austin Soundwaves, to not only reach communities with limited resources but also target the artistically underserved.
AS: How many kids are in the program?
HC: Between the campuses of East Austin College Prep we have over 100 students in grades 5-10. At our finale last year we had nearly 100. In the three years it’s nearly tripled in size, starting with just under 40 students in grades 6 and 7.
AS: To what do you attribute that growth?
HC: I think that the opportunity to play an instrument is the big contributor. The students pay a $15 insurance fee, but everything else is covered. If you ask them, the answer is always, “This is something I wouldn’t get to do anywhere else.” They are jumping at the opportunity and recognizing the chance to play an instrument, to do something they wouldn’t otherwise be able to do. Also, there is often the stigma which is sometimes associated with playing in band or orchestra, right? In many schools, if you’re not playing a sport you’re not cool. None of that really applies to these kids. A lot of the “cool” kids are musicians, so there’s a social element that partly drives the growth. Speaking to that social aspect, a lot of the Austin Soundwaves kids also participate in football, volleyball, cheerleading, soccer, baseball, and a variety of other activities. 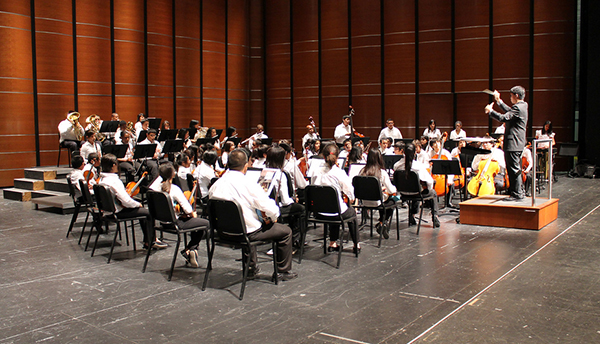 AS: What is different about this teaching experience relative to your past involvement?
HC: Many of the kids come in with a variety of challenges, socioeconomic ones being the most common. I’ve taught students in other programs who come from backgrounds where music lessons are a given, and sometimes those students are less personally motivated and more parentally motivated—do you know what I mean? Now, the Soundwaves parents are certainly supportive—they are extremely supportive!—but most of these kids are here first and foremost because they want to be here. In my past experience, there have been times where I wasn’t sure if a student was doing it because they enjoyed playing music or because their parents enjoyed them playing music. That has never been the case with Soundwaves; the kids are doing it because they love it. Also, the parents and siblings are always so excited! The applause at the concerts is deafening, every single time, for every single piece. And I’m talking about Go Tell Aunt Rhody and unison versions of Iron Man. They are cheering like it’s the best thing they’ve ever heard, and the enthusiasm is, in my experience, unprecedented. There is no pretense of formality in terms of applause or reaction, nothing is pro-forma. The kids say, “I wish we could have a concert every day,” especially right after a show, and before a show they are truly as focused as any group I’ve ever run, including college and professional new music groups. They do it because it makes them feel special. They are wholeheartedly throwing themselves into it because of their love of music. They work very hard on their own. And I find I can be harder on them, in a constructive way of course, than other ensembles. They respond well to discipline because they want to be good, they want to play well. They don’t hold it against you; they seem to crave it.

The other day the group was particularly rowdy and with six minutes left in rehearsal, I’d had enough. I said, “You’ve wasted most of this rehearsal today. You’ve wasted my time and your time. You are all better than this. For these last six minutes I want you to sit; don’t talk, don’t pack up. Just sit.” Two things happened afterwards. One was that most of the students came up and apologized, both personally and for the group, for their behavior. The other is that the other teachers and aides who remained with the students during the six minutes said that nobody moved, they sat there in perfect silence. The only exception was when, after several minutes, someone asked if it had been six minutes yet, which was met by a resounding “shhhhh!” by the rest of the students. These students know that when I get frustrated or angry, it’s only for the moment. It’s not something that I ever hold onto. Many of them have even said I don’t stay angry long enough. That I smile too much! 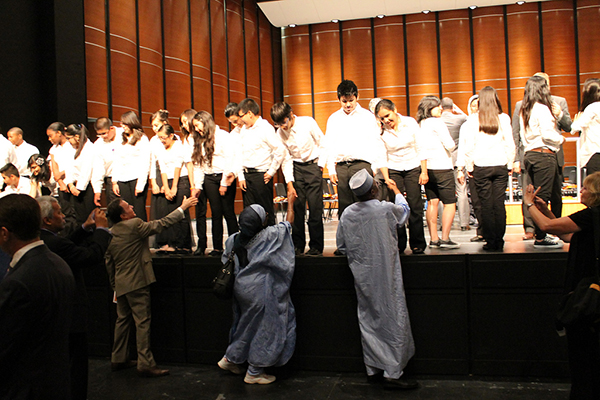 AS: It seems like the kids in general are quite enthusiastic. Have you had any students who are indifferent or treat it like a compulsory class?
HC: Well, one student comes to mind who was having some issues. He’s a tough kid, concerned about his reputation as being “very cool,” and had started talking back, missing rehearsals, and generally seemed like he’d grown indifferent. So we sat him down and had a talk with him and asked if he really wanted to be here or not. And he started crying. He said, “This is the best part of my day. It’s what gets me through the day. I don’t want to leave.” And that was the end of the issue.

AS: How would you describe your experience working with Austin Soundwaves? You are an active composer, new music ensemble director, and you teach at a university, so how does this fit in?
HC: I never take a job that I don’t want to do, and when I took the position at Soundwaves I thought it would simply be another teaching gig like the ones I’d taken before. But I’ll tell you that this has affected me personally much more than I ever could have imagined. A year ago, I never would have thought, “This is the best part of being a musician for me right now.” I love all the things I do, but this is the most rewarding and satisfying thing I’ve done as a musician. These kids make me want to work harder and to be a better musician, teacher, and person. It’s a challenge like nothing else.