By acting as a clearing house for collaborative work and by moving concert music to different venues, Jacqueline Perrin’s Classical Reinvention project is bringing music to a new audience.

Big changes often come from the smallest sources. A cough, a rustling of the cough drop wrapper, the realization that the interminable amount of time and noise required by that guy to “quietly” open his cough drop is going to ruin the show for you. The further realization that, while you’d rather not have someone making any noise during the slow movement of whatever is on tap that night, the real issue is as much the forum as it is the noise. Sure, the venue might demand silence with a capital “S” but does the presentation? I’ve taken every creaky door late entrance and unmuted cell phone ring as a challenge to redouble my focus as a listener, though this sometimes makes me feel as though I must look like someone trying to bend spoons with their mind or to communicate telepathically. Then it occurs to me that if I was in a less formal setting, I would naturally take these things in stride and enjoy the show. Jacqueline Perrin has been employing this idea for the last few years with her Classical Reinvention project by presenting interdisciplinary shows in a variety of settings around Austin. 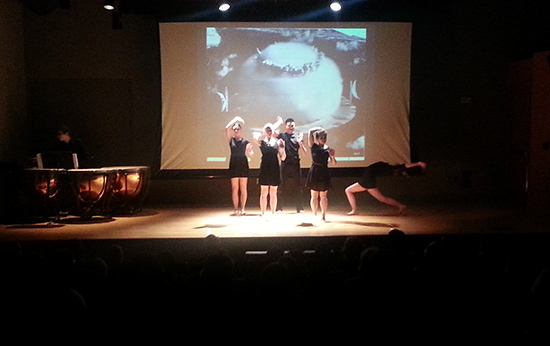 Move On by Shirley Luong set to music by Michael Mikulka

Her first effort took the form of a salon concert. Perrin performed a variety of works at the piano and spoke about the music between pieces. After that initial experience of connecting with the audience through the music, as well as through discussion of the works, she decided to develop a series of shows that have steadily gained in popularity. Her follow up, Music in Real Time, presented five works with visuals addressing the structural aspects of each work as the pieces were performed, including works by Cage and Radiohead. Interviews were conducted between pieces in an effort to bridge the gap between audience and performer. Music Under the Stars was originally scheduled to be performed on the roof of the University of Texas Astronomy building, complete with giant telescope for viewing, but was moved inside to a makeshift blackbox theater as stormy weather rolled in. Audience members created their own art in response to the performances and participated in discussions of the both their own creations and the music that was performed.

In its first move off campus, Disco Classical involved contemporary classical pieces alongside works by Astor Piazzolla accompanied by salsa dancing. Said Perrin, “The show went great, but there were a few patrons who enjoyed the bar access more than we anticipated.” Paint, Play, Plié was a multi-disciplinary endeavor featuring dancers in the FAB Gallery under UT’s Fine Arts Library. Musicians were set up in opposing corners of the room allowing for virtually uninterrupted music as dancers improvised. Artists painted on large glass panels in the center of the room, interpreting works by Paul Lansky, Schubert, Haydn, the Bad Plus, and UT student composer Zack Wilson in real time. I attended their most recent effort, Synthesis, a collaboration between Classical Reinvention and their partner group Dance Action under the auspices of the Cohen New Works Festival. 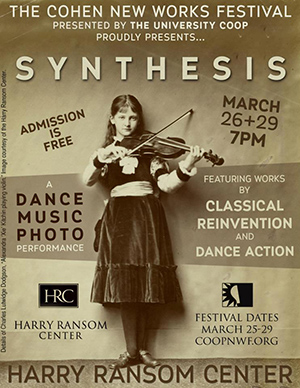 I know I’ve gone on and on about it in previous posts, but Austin in March is a magical place. Dressed in L.A. weather with blue skies as far as the eyes can see, it is prime real estate for outdoor activities of all kinds and concerts are no exception. Synthesis was conceived as a guided performance originating outside the Harry Ransom Center on the University of Texas campus.

Starting with a French horn choir and around a half dozen dancers, the first work, Whispers of a Wall, had the dancers moving on and around the small walls surrounding the pavilion. Though the arrangements (Debussy in this case) were lovely and well rendered, we came upon one of the reasons that performance outside is tricky. The sounds that we are used to having directed into our ears via well-constructed acoustical spaces (or headphones) are disseminated into the air, robbing them of much of their power. Fortunately, though there was a standing-room-only crowd for the show, everything could be heard and arguably the character of the Debussy matched the more modest dynamic. The audience looked up and through the windows to see the dancers on the second floor landing of the interior for the second work Frames, which featured the choreography of Courtney Mazeika and Victoria Mora. It was visually stunning and was beautifully matched by the voices of the UT Collegium Musicum. However, in a “cough drop wrapper writ large” moment, a rock band on the other side of campus had apparently scheduled their “Bud Light Rock Fest Concert” at virtually the same moment. Of course, the singers never missed a beat, and it’s my firm belief that the audience bent every spoon in a ten-mile radius while focusing laser-like on the proceedings. 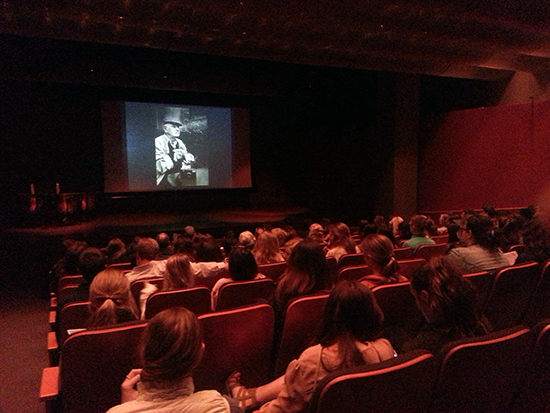 Inside the Prothro Theater at the Harry Ransom Center

Thankfully, the show next made its way into the Harry Ransom Center. Guided by the dancers, the audience walked through a phalanx of singers on its way inside and passed cellist Samuel Johnson as he and two dancers performed Tawny Garcia’s Tether, which while certainly substantial in its own right, served—as the title might suggest—as a connective element between the inner and outer performances. Once settled into the space inside, Ethan Greene’s Inventions and Interludes in Iron began to emanate from the speakers. Broken into several short, distinctive sections, the work featured dance that mirrored the fractured quality of the electronics. Jagged jaw-harps glissed high and low as SOS chirps hopped around a metallic scratching counterpoint. Another section saw regular rhythms surrounded by what sounded like re-imagined car horns, detuned and chromatic. The first movement of Michael Mikulka’s To Summon Rain, Wind, Snow, and Thunder for timpani had a quasi-military quality which matched the choreography as well as the imagery of nuclear destruction projected behind the dancers. The second movement featured glissando gestures mirrored by a solo dancer and was a respite from the initial strength of the first movement. The final movements saw a return to the military character of the first, with matching repetitive, angular moves by the dancers. It was a great closer, and frankly there are few more definitive ways of ending a show than with a guy wailing away on timpani.

Classical Reinvention is doing it right. By acting as a clearing house for collaborative work and by moving concert music to different venues, Perrin is bringing music to a new audience. She’s also not afraid to try something new in every presentation instead of simply offering a recurring concert series. In each of these shows, musicians, artists, dancers, and audiences create shared experiences that serve to broaden the perspective of all participants. And even when the Gods of Rock make their presence known, the audience is prepped to focus, listen, and bend their own spoons.