Fast Forward Austin is run by three Austin ex-pats who know what the town is all about and who keep that in mind when putting this annual circus together.

I’ve complained on more than one occasion about the changing of Austin into a theme park, and I feel comfortable saying that if you’ve only been here during SXSW or the Austin City Limits Festival, than you haven’t really seen the town. It’s not the gentrification alone but the rate of change which makes for a real baby-with-the-bathwater situation in a town that got weird off the radar and for so many years stayed that way. The cache of interesting events and people that really make this town unique is being lost at a breakneck pace, replaced by stylized food trucks and Formula One Racing [1]. I like funky tacos and fast cars as much as the next guy, but at some point the value that is being traded on will be gone, and any number of other towns will be just as attractive assuming that they have buildings that will take a coat of paint.

So how is a festival that exemplifies Austin’s classic quirks so perfectly being run from LA, New York, and Hong Kong [2]? Shouldn’t I boycott these interlopers and demand that they get off my lawn? No, because Fast Forward Austin is run by three Austin ex-pats who know what the town is all about and who keep that in mind when putting this annual circus together. 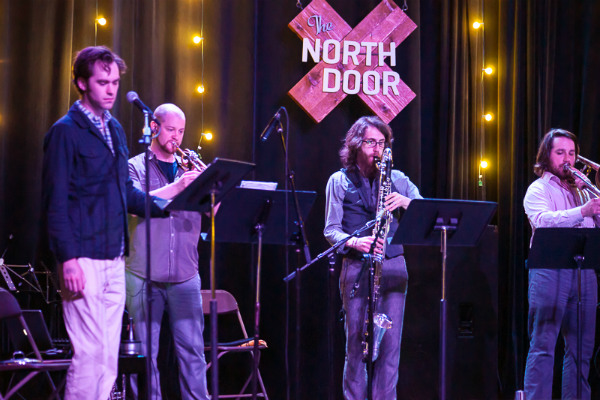 This fourth installment of the all-day festival returned to The North Door with another fantastic line-up of local and national performers. Loadbang cranked up the show with offerings from Christopher Cerrone and Andy Akiho, the latter’s three movements from six haikus hinting at the percussion deluge to come with each player eventually trading their trumpets and clarinets for pot-top syncopation. The Skyros Quartet paired with the composers of West Fourth New Music Collective to present a number of quartets and trios written by the group. They opened with Matt Frey’s Procession which featured a repeating chord progression played largely in unison that eventually broke apart, each player moving mechanically away from the original material. Ruben Naeff’s Jackass, which was initially written for the JACK Quartet, closed their set. Quick, quirky, and rambunctious, the piece popped right off the stage. 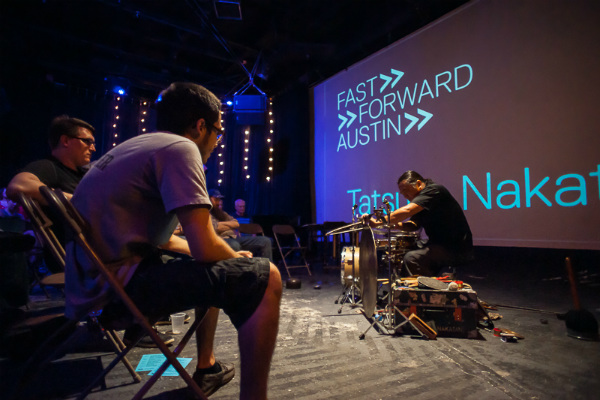 To say that the music and performances of Tatsuya Nakatani are idiosyncratic and mercurial is an understatement. Perhaps FFA co-director Steve Snowden put it best during his introduction when he said, “I can’t really put into words what this guy does.”

I will now attempt this.
Nakatani began by working a large hanging tam-tam with a large bow [3], one that had a particularly arched stick and looked a bit like an archers bow. Intermittent hits with a large beater colored the sound and after several hits he grabbed a second bow and began to work another tam-tam along with the first. This was all well and good, and I figured we were in for a nice set of screeches and overtones.
Nope.

He eventually moved to a little trap kit with a kick, a handful of toms, and a grab-bag of goodies. Shortly after arriving at the kit, everything went nuts. Singing bowls danced on the head of a tom as he stacked half a dozen cymbals on one another, slamming them on and around the bowls until most were on the concrete floor. One cymbal with a hand-sized hole in the center was bent, and scraped rapidly across the head of the tom, producing a sound like a bowed saw run through a distortion pedal. Nakatani clearly had a few go-to sounds (such as the tam-tam bowing) that he used and manipulated convincingly, but it was when he seemed to be winging it that the real magic happened. The afore-mentioned cymbals and prayer bowls came and went frequently, and while Nakatani was able to keep the energy going (at full speed, even during the relatively quiet opening and closing portions of the set) it occasionally threatened to fall off the rails. Once or twice a cymbal fell too early or a stacking of instruments just didn’t quite gel and these moments were wonderfully visceral and real. This is what, IMHO, live improvised music is about: at least one part communication with the audience and one part danger. Totally fantastic. 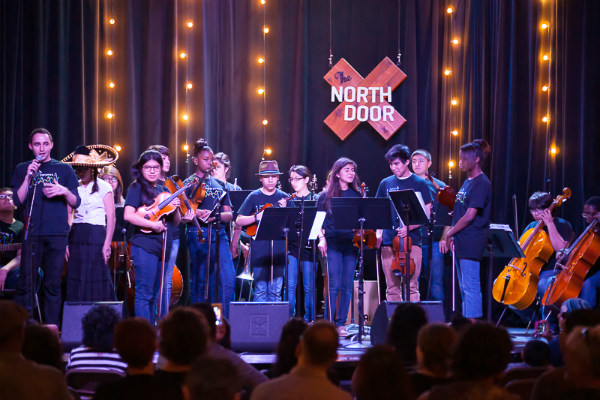 Austin Soundwaves returned this year and sounded better than ever. I’ve heard the El Sistema-inspired group play multiple times over the past several years now and not only was this performance much stronger in terms of fundamental pitch and rhythm, they’ve also come a long way in terms of their musicality. Their rendition of Cielito Lindo was particularly strong and their works from the canon were very well presented.

Just back from a three-week European tour, line upon line percussion opened with Reich’s Music for Pieces of Wood, presented as a sort of historical preview of (spoiler) Mantra Percussion’s Timber performance. Watching LUL reminds me of my rock band days when we’d get home from a tour flush with road chops, except that these guys play like this all the time. They are all superb players, and while watching Matthew Teodori in particular you get the impression that every single note is the most important thing in the world. It makes you think that whatever endeavor you’re involved in, you probably need to up your game. 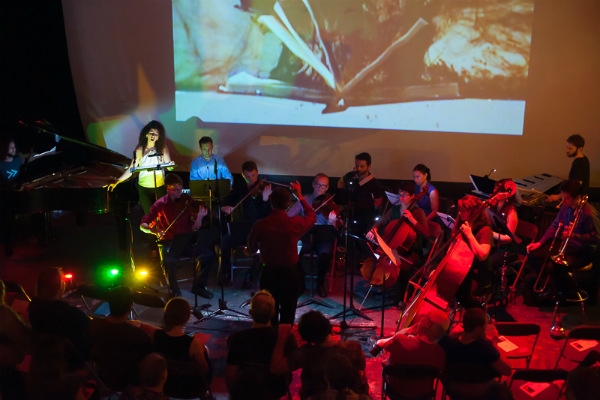 FFA has usually had a featured piece or act, something that gets all the nerds [4] hot and bothered. This year had a two-fer in Donnacha Dennehy’s That the Night Come and Michael Gordon’s Timber. The former was played by the Fast Forward Orchestra and conducted by Austin Symphony Orchestra’s Peter Bay. Featuring an emotionally powerful performance by mezzo-soprano Kathryn Findlen, the orchestra was a perfect example of what Austin has to offer in terms of new music. During the course of the day, sound from outside would make its way inside The North Door, but I swear Austin shut up for the whole piece. Mantra’s performance was no less thrilling, taking the audience on Gordon’s hour-long marathon of pulsing, surround-sound endurance. Finally, The Grant Wallace Band wrapped up the festivities with a set of folk and jazz influenced originals that would have been at home in any number of bars in town as well as they were at the festival. 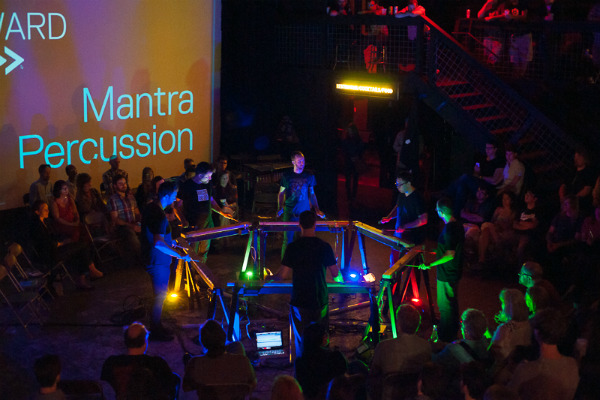 Places change and grow, and the only constant is the complaint about how things used to be. Checking out eight hours of banging new music is one way of getting your mind off that fact.

1. The 24-gate regional airport that serves Austin has a direct flight to/from London now, so those from overseas can see F1 without connecting flights. This has been a dream of Willie Nelson’s for some time now.

2. Last year it was Sweden, Portugal, and New York. It’s my understanding that the next one is going to be run from the moon.

3. Actually, he began by asking the venue to turn off the AC. When it was revealed that the sound he was hearing was the refrigerator which was keeping all the beer cold, he smiled, shrugged, and started the set.