Austin Chamber Music Center has been around for decades—long enough to have existed when the governor was a Democrat, SXSW was a baby, and Austin was just a gleam in marketers’ eyes. Its summer festival is more recent, and the inclusion and promotion of new music even more so.

I’ve commented in recent stories on sea changes in the Austin landscape, both musical geographical. It’s hard not to be a bit curmudgeonly about the growing pains that are impacting the place I’ve called home for 13 years, but it comes with the territory. I suspect that even those who’ve been here for only a few years would have a few things to say as traffic, construction, and festivals pile on, making the most stoic of us think wistfully of the salad days of, say, 2008. A manifestation of this change is the move of blues club Antone’s from its downtown location (not the original 6th Street establishment mind you, but one maintained for some time) to Riverside Drive, just southeast of downtown on the other side of the river. I used to live about two blocks from there over a decade ago, and at the time the building housed a succession of clubs in which things occasionally got shooty and stabby. The area housed all the vices of an early-’80s Times Square and stood in stark contrast to the lovely homes and neighborhoods west of I-35. Despite my concern about change, it was nice to pass by my old digs and to be reminded that sometimes change can be good. 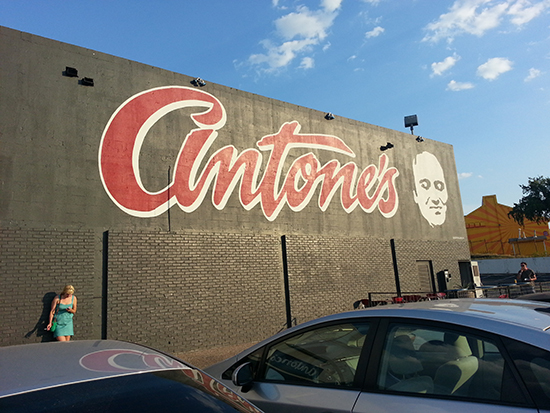 As part of the Austin Chamber Music Center Festival, Victoire was invited to play a show at the new Antone’s venue. This was my first trip there and my first time to see Victoire, so I was primed for something new and different and I wasn’t disappointed. Austin Chamber Music Center’s core audience does skew toward the traditional, so I was also curious to see how the show would be received. For their first appearance in Texas, Victoire chose to perform their debut album in its entirety, and though it’s not a “concept” album, the moods and themes explored did create continuity among the ten or so tunes played that evening. By and large the strings, and to a lesser degree the clarinet, were relieved of their traditional roles and assigned smaller circling riffs throughout much of the set. The opening track, A Door in the Dark, stands as a great example of indie classical in its moody, detached coolness,; a slightly intellectual character showing up in the 4+4+4+3 phrasing, clearly indicated in the conducting and cueing of leader Missy Mazzoli.  Perhaps a nod to the Pixies/Radiohead/Kinks school, subtle alterations of typical pop song structure (such as the lopping off of a single beat from the end of four bars) are among the key elements of this style, and Victoire fires on all cylinders in this department. Cathedral City, the title track, bore these features as well. The piece rides in on an electronic intro featuring a post-808 [1] hi-hat track hyperkinetically chugging along in a pattern that had just enough hiccup in the pulse to keep you guessing. This framework was set up in stark contrast to the longer, measured vocal and violin lines that intertwined above. While recorded elements served as preludes to individual tunes, at other times they carried the banner for an entire work. In A Song for Arthur Russell, this treatment lead to a harmonically static but rhythmically active texture, with punchy sixteenths kicking around above the pulsing electronic bed.

It’s in the vocal parts that Victoire separates the indie from the classical. The lyrics (at least in this performance—the sound and mix were great but you never know!) were uniformly obscured and it was difficult to hear distinct words when they were used, much less get a sense of sentence or meaning from the lyrics. This is not at all meant pejoratively, and truly it could just be that I couldn’t make things out clearly for any number of reasons aside from composer intent…but I think it was in fact composer intent, and that the use of the voice here was as an instrument primarily as opposed to a lyric delivery device.  Even in the music of the late Beatles one finds (not always, of course) the use of lyric and story which are altered based on presumed listener expectations. [2] Victoire simply doesn’t have this discussion and presents the vocal elements as music artifacts, pure and simple. And it works like a charm. 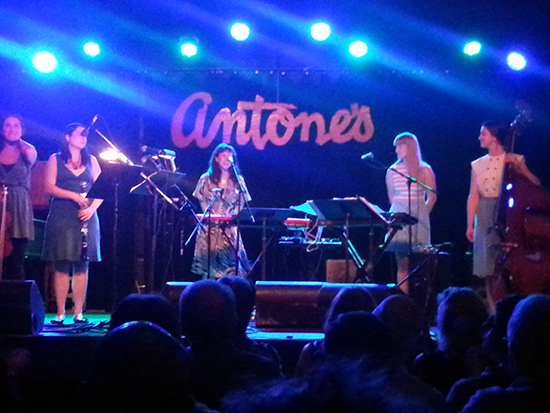 Victoire takes a bow at Antone’s 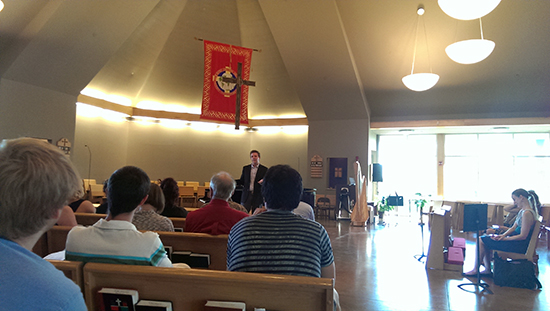 Following a rousing performance of three Szymanowski mazurkas by Jim James, Reed was joined by baritone Phillip Hall for three sections from David Del Tredici’s Gay Life as well as “Matthew Shepherd” from his Three Baritone Songs.  From the lilting sway of “In the Temple” to the tongue-in-cheek earnestness his setting of Ginsberg’s “Personal Ads,” to “After The Big Parade” a lyrically solemn and musically spiky rumination on the impact of AIDS in the early 1990s, the three songs were musically and lyrically crystal clear and made for a well-placed run-up to the final piece of the set. The murder of Matthew Shepherd is horrifying, but Jaime Manrique’s text—which imagines Shepherd’s final moments—is a gripping meditation on transfiguration, and Del Tredici’s encapsulation of the text, from the descending lament-inspired bass line which never fully descends to  the whole-tone ascension representing the spirit leaving the body was completely spot-on and riveting.

Reed’s Fantasy Variations on “Una Furtiva Lagrima” played hide and seek with its theme, the flute, harp, and bassoon trading long lines in odd time, while Pauline Oliveros’s To Valeria Solanas and Marilyn Monroe in Recognition Of Their Desperation added piano and clarinet to the mix. An initial thrum-thrum-thrum from all instruments was among the few times that homophony trumped polyphony in the work. Having said that, the various lines did all follow the same gravitational pull, moving to and fro in a flock-like fashion throughout the bulk of the work. Ben Stonaker’s Soliloquy for clarinet alone provided a workout for Jon Guist, whose wonderful tone was complimented by his technical agility. A quiet introduction ornamented with grace notes led to a series of increasingly complex and intricate sections that put both to the test.

The final work was Lowell Liebermann’s Sonata for Flute and Piano performed by Reed and Timothy Hagen. A simple ostinato in the piano became a compelling counterpoint to the initially simple flute line of the first movement. Labeled Lento con rubato, the movement built to a fever pitch and fooled most of the audience (all of us? I was clapping…) into applause when we thought that perhaps the movements were played attaca. But when the Presto Energico burst from the gate, we realized that the drive at the end of the first movement was just a taste of what was to come. Hagen and Reed tore through the work, displaying a wide variety of technical virtuosity and musical sensitivity, and the final notes only rang briefly before everyone was whooping it up.

ACMC has been around for decades—long enough to have existed when the governor was a Democrat [3], SXSW was a baby, and Austin was just a gleam in marketers’ eyes. Its summer festival is more recent, and the inclusion and promotion of new music even more so. I suppose that there were people who (like me with the recent general direction of the city) resisted that change, that growth. Though I’m holding steady with my arms-crossed, head-shaking stance on Austin change, clearly in the case of ACMC programming it’s a trend that’s both welcome and growing.

1. You may remember hearing this all over the place 30ish years ago.

2. For instance, what the hell does, “She came in through the bathroom window / Protected by a silver spoon / But now she sucks her thumb and wanders / By the banks of her own lagoon” really mean? I don’t know, but it works lyrically and manages to paint a picture in the same way that “I Want To Hold Your Hand” does without telling a standard story. The Beatles were great at this (both in terms of music and lyric) specifically because they spent so much time playing and writing standard blues and pop fare that they understood it on a molecular level and could therefore change it just enough to make it new and interesting without losing the essence of the style.