My enthusiasms for “World Music” have been exuberant and far-flung. I also tend to embrace independent, analog media, such as locally-based broadcasts from the heart of a community.

My enthusiasms for “World Music” have been exuberant and far-flung. I also tend to embrace independent, analog media, such as locally-based broadcasts from the heart of a community. One special radio changing-of-the-guard I look forward to each time I’m able to listen in happens weekly on New York’s radio ether: Saturdays just before 8PM on WNYE, a brokered [rent-by-the-hour] public service station, this certain transitional moment occurs between two vibrant programs. Winding down their last hour is Elena Marouletti’s Aktina FM—“the only Greek Cypriot American radio show in America”—and coming up, Trinidadian DJ Trevor Wilkins brings on “the longest-running calypso show in the world.” Not only do I enjoy listening to two of my favorite musical genres airing back-to-back at 91.5 on the dial, there’s also what sounds like real camaraderie between the enterprising hosts whose personalities shape what is for me a bonus to this prime-time non-commercial double bill.  At this sign-off/sign-on cusp, they seem genuinely fond of one another, and of each other’s musical traditions, too. From mics in separate studios, each encourages their respective loyal followings to keep listening and tune into the other’s program offerings. They represent year-round commitments to keeping their own cultures vital, and in this ephemeral pivotal sequence, also voice mutual respect and affection, warmly acknowledging each other’s music, heritage and listenership. 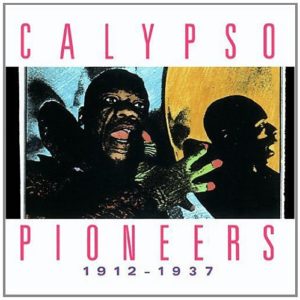 Rounder’s compilation Calypso Pioneers 1912-1937 is a great place to begin a discovery of Trinidadian music.

While we can only wonder how many of their regular listeners actually heed this call to keep their ears open—and certainly both hosts must run fund drives about twice a year, so it never hurts to cross-promote to another fleetingly captive audience—it’s sweet to imagine rembetika fans staying tuned to enjoy climactic chromatic “pan” [steel drum] passages and syncopated patois innuendo, and West Indian music fans maybe developing new tastes for modal melodies and odd meters. Both the shows feature a wide array of vocals and instrumentals, from various eras: vintage and newer selections, all drawing from highly eclectic island heritages. Though I tend not to favor the more slickly-engineered contemporary ‘pop’ varieties of either repertoire, each show seems steered by its own savvy producer/host (going on a first-name basis) to nurture appreciation of the rootsier side of their playlists. Both Aktina’s Elena and her Caribbean counterpart (whom she affectionately refers as “Trevi”) operate as MC/curator/ambassadors, peppering their multi-hour broadcast stints with community announcements, music dedications and song commentary, on-air call-in contests, event promotions, homespun spots with the “kind compliments of our sponsors,” and occasional fund drives—to subsidize what Trevor reminds us is “precious, expensive airtime” which really could be lost if not enough contributors come through. I am grateful that these devotees have found a way to share their music and earn support to keep it available this way. And while I’m already familiar with many tunes from each of these traditions, each show brings me both new retro discoveries and the pleasure of familiar songs I’ve already grown to love (sometimes with different riffs or settings I’ve never heard before).

While I am usually able to hear these shows full of down-to-earth vibrancy, I still have the privilege of visiting as an auditory tourist.

One added appeal for me on the current-day WNYE—in addition to the modal, mellifluous music of the Aegean and the syncopated rhythms of the Caribbean which nurture my ears and my being, and the very human presentation by Elena and Trevi—is that while I am usually able to hear these shows full of down-to-earth vibrancy, I still have the privilege of visiting as an auditory tourist. Only occasionally am I aware of any cultural politics which might affect my pure enjoyment of this artistry in community context.

Of course, motivated aficionados can surf the web on their own for the most obscure “ethnic” music examples, and closely study audio online. I have even pursued specific pieces after tantalizing or intriguing introductions on the radio shows. There are great live performances which I’m thrilled to be able to attend sometimes, often with dance and even singing along—something I revel in even if I may not jump in myself. Generally, resources abound for study and involvement: music workshops, CD liner notes, ethnomusicology treatises, and “world music” magazine format shows, both independent and syndicated. Meanwhile for a weekly connection, whether in my car or my living room, the radio context is far more interesting than any Pandora stream, even if I’m not fond of all the music on offer in the course of any show or may not relate to every point of view I hear.

Even as a non-native listener, I respect and try to understand whatever issues may come up in these broadcasts. Naturally I may sometimes want to remain either oblivious or able to keep my distance about any drama behind the scenes or within the material that might distress me, I am sometimes keenly aware both of liberation politics I respect as well as controversies that are upsetting. (On one occasion I heard a fascinating but distressing track from the early ‘70s—“London Gay”—and when I wrote in to Trevor Wilkins, he avowed himself to be no homophobe, saying this was just “West Indian satires.” Those lyrics are very clever indeed if I even catch half their meanings, but ending with a rhyme of “fail” with “jail” and “no bail” still leaves me wondering, given the deadly serious homophobia in many parts of the Caribbean and its diaspora. And the show host’s on-air laughter—with no commentary—also made me question, but I’m glad he took the trouble to write back. I give him the benefit of the doubt and was in a sense grateful for the revelation of an artifact I would never otherwise have found.) On the other hand, hearing Greek vocals often touches my emotional core even though I understand only a smattering of the words. And in yet other instances, it’s been truly touching to be aware of what’s happening, such as Trevi’s on-air grief and remembrance when his mother had recently passed away. 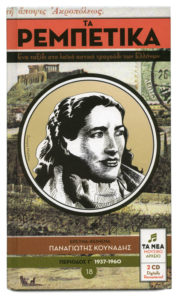 A rembetika compilation featuring recordings by the iconic singer Sotiria Bellou (1921-1997) who is featured in the illustration.

The “tradition” of communities and musicians overhearing each other goes back centuries, probably millennia, before radio. By the broadcast era this certainly created interesting infusions for New Yorkers even more commonly back in the “Golden Age of Radio,” which was also an era without air-conditioning, leading to even more open windows and doors and ears. I’ve seen accounts of various crossover hits born out of the curiosity and enthusiasm of cultural mixing this way. My own affinity for Yiddish and Greek music reflects the interplay between these genres, demonstrated by shared melodic repertoire which bands I’ve been part of (more on that in the coming weeks) have covered in styles reflecting both sources, and likewise by recordings made by the such renowned greats as klezmer clarinetist Dave Tarras under his own name as well as under pseudonyms for other labels to put music by the same players out to various different ethnic markets from New York’s industrious studios, labels, and distributors!

The “tradition” of communities and musicians overhearing each other goes back centuries, probably millennia, before radio.

Actual crossover with commercial intent is yet another vast topic spanning various eras which can be charted in copious novelty tunes superimposing two seemingly unlikely genre combinations (often reflecting excellent command of each style in their arrangements and performance, even if using clichéd material in juxtaposing digestible, stereotypical forms). I’m fascinated by these, too, in part as a reflection of how well musicians did know at least certain aspects of each other’s traditions, and how curious neighboring people might be about each other’s languages and customs. Through various instances, both in heterogeneous “Old Country” settings as well as in the challenging worlds of immigrants thrown together, musicians might have both the opportunity and the impetus to take on tunes, style vocabulary, knowledge of dances and popular repertoire etc. to make themselves employable for as many situations as possible, whether as performing or recording artists, and sometimes even cross-cultural impresarios or polyglot producers.

Back to considering what commonalities fascinate me among these distinct genres, trying to generalize beyond superficiality, I find variously energetic, aesthetic and even intellectual connections. In both Greek and Yiddish genres, as with other related musics of “Near Eastern” provenance, inherently majestic, mysterious and emotive qualities, effusive yet controlled, are carried by highly variegated modal sounds. As to Calypso and Klezmer, though these may share no discernible links of direct mutual influence, I am attracted to the propulsive, rowdily sophisticated rhythms and structure in each genre’s upbeat dance forms, as well as the hilariously nuanced wordplay often found in both of these genre’s vocals—each originating in a humorously incisive macaronic mindset commenting semi-covertly from a vantage point outside, but very familiar with, the dominant culture.

As a drummer and an enraptured listener, many more related worlds beckon too—Brazilian music and Balkan music offer huge joys encompassing many of my favorite qualities in a plethora of gorgeous, challenging forms. As to West Indian and Greek: So far my schedule has never yet allowed me to join in the Brooklyn steel drum rehearsals I used to contemplate, and I only once sat in on dumbeq at Astoria’s now long-vanished Akroama nightclub ages ago when called up unexpectedly by someone I knew on the bandstand (the same person who later introduced me also to Portuguese fado). My ears and my heart liven up with these sounds, which—in lieu of a live concert, parade, jam, or party—are still great to hear on-air, programmed by people rather than algorithmic formulae. I’m grateful for any regularly-scheduled, lovingly-grounded radio infusions with a real sense of context, personalities, language and human connection; it’s an atmosphere where the music lives and breathes. 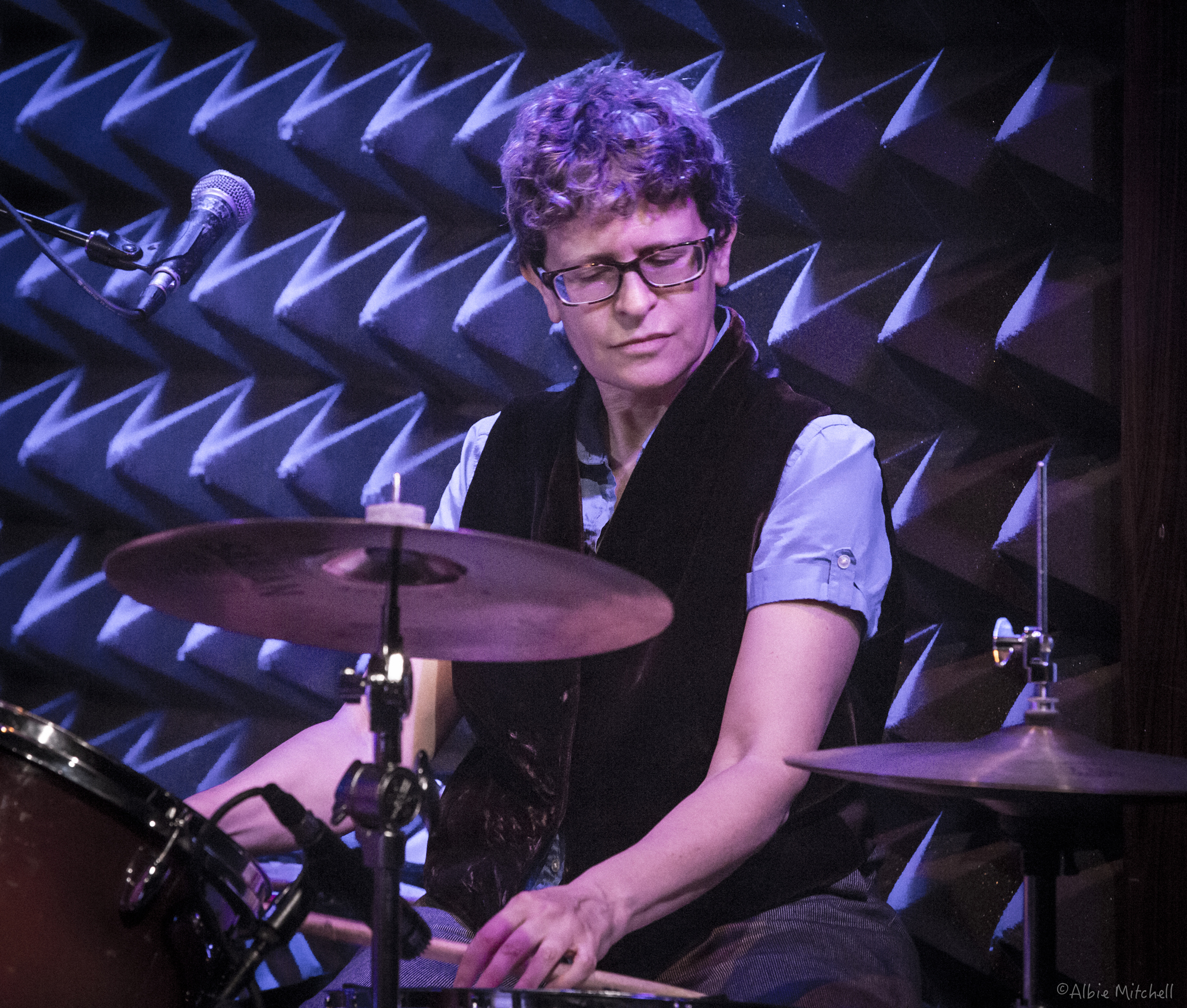 Eve Sicular is a New York-based drummer and the founder/bandleader of Metropolitan Klezmer (1994) and its “sister sextet,” Isle of Klezbos (1998). Eve’s arrangements have been heard on Showtime’s The L Word, HBO’s Schmatta: Rags to Riches to Rags, CBS Sunday Morning, and London’s Royal Ballet at Covent Garden, as well as in pieces at New York Theatre Workshop, the Museum of The City of New York, The Wexner Center, The Jewish Museum, and the Contemporary Jewish Museum. Sicular’s debut as a composer/lyricist/playwright, J. Edgar Klezmer: Songs from My Grandmother’s FBI Files, was performed at HERE Arts Center in New York in June 2015. Her publications and lectures include topics and titles such as The Yiddish Celluloid Closet and Music in Yiddish Cinema.