Art in the Age: Going for (more than) a Song

We have to view concert presentations as much more than just about music. Whether it is through the use of lighting or video projections, choreography, or unusual staging, presenters and performers no longer have the option of trusting the music—however innovative or unusual—to be the sole draw for their audience.

While it’s relatively easy to debunk the tired jeremiad about the death of classical music, we’ve admittedly had a rough go of it lately.  Yes, several orchestras have teetered at the edge of bankruptcy after years of bad labor/management relations and prolonged strikes and lockouts.  Yes, record sales are down.  Turnout for live classical performances is down as well.  Audiences, simply put, are not willing to pay as much, if anything, for music anymore.  This has rendered recordings as largely obsolete commodities and transformed them into little more than a necessary (and expensive) calling card for professional musicians and a souvenir for audiences of favorite live concerts.

We, therefore, have to view concert presentations as much more than just about music.  We need to make them into unique events in order to attract audiences to the concert hall and generate sales for recordings that will remind them of this unique experience.  The definition of an event will vary based on many factors, largely related to the resources available to performing organizations, presenters, and individuals.  Whether it is through the use of lighting or video projections, choreography, or unusual staging, presenters and performers no longer have the option of trusting the music—however innovative or unusual—to be the sole draw for their audience.  Ignoring factors as simple as the pacing of a concert or the way one addresses the audience on stage can destroy a performance.  I’ve attended concerts by some extraordinary virtuosos who, nevertheless, approached the audience with deer-in-headlights trepidation and appeared amateurish in the process, making for a less than enjoyable concert experience. 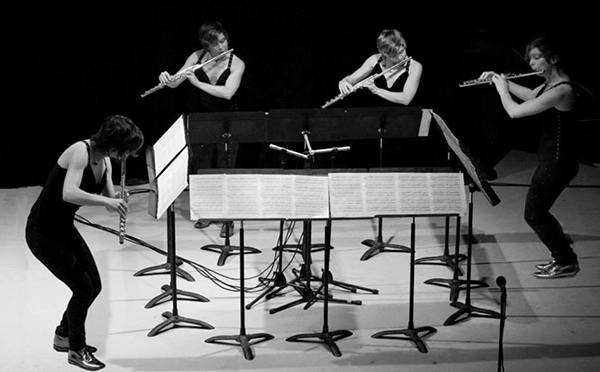 By contrast, a recital by the MacArthur fellowship-winning flutist and founding artistic director of ICE, Claire Chase, which I (full disclosure) hosted on my series at the Atlas Performing Arts Center last fall, was a veritable master class in how to keep an audience riveted.  Once upon a time, a recital by a flute virtuoso would entail a program of works for flute accompanied by piano (perhaps one or two short pieces for solo flute thrown in there, for variety), performed by players wearing tuxedos or ball gowns on a fully lit stage.  There would be a great deal of formality and ceremony, with the performers entering from the wings to rapturous applause, bowing, tuning their instruments, and—finally—performing.  As one piece would end, another set of bows, perhaps an exit and a new entrance, the process repeated several times until intermission, after which it would be repeated again until the end of the evening.

Claire’s performance, instead, was a veritable recreation of her 2013 album Density. It began with a darkened stage and electronic music which served as an introduction to Claire, who, after the two minutes of sound sculpture finished, burst onto the stage performing Steve Reich’s Vermont Counterpoint.  She moved seamlessly to and from different points, picking up various flutes strategically placed on the stage and only once—for Philip Glass’s Piece in the Shape of a Square—used printed music (which was, appropriately, arranged in the form of a square, thus becoming a conceptual part of the performance).  It was a simple and relatively inexpensive affair, requiring only a single performer on stage and an engineer working the combined sound and light board at the back of the house, but the results were exhilarating, a marked contrast to more traditional approaches in which talking to the audience is considered “edgy.”

It is a contradiction of these times that, while record sales and attendance at concerts appears to be down, the number of people pursuing careers as professional musicians seems to be rising.  What does this say about the apparent death of classical music? I’d wager that it means the rumors of our art form’s death are greatly exaggerated.  The truth remains, however, that it is increasingly difficult to forge a life in music in this day and age.  This is where a wider view of Adam Sliwinski’s “mutual benefit balance” which I proposed in my last article could come in handy.  A view of the network that extends beyond the 1:1 ratio of the composer-performer relationship, extending, through social and traditional media platforms as well as good, old-fashioned interpersonal relationships, to presenters, venues, social institutions, and fellow composers.  This, in my experience, is not only helpful in forging career longevity, it will extend our music’s societal impact as well.

At her commencement speech to the graduating class of Northwestern University last summer, Claire said, “(w)hether we like it or not, the calling of our generation is not to occupy positions created for us.  Our calling is to create positions for ourselves and others, to improvise and blow the ceiling off of anything resembling a limitation.  In a word, our calling is to be entrepreneurs.  Classical music isn’t dying–it’s just now being born.”[1]  She is right: we can no longer count on others to give us jobs in the arts.  We must create these opportunities for ourselves!  This spirit has certainly driven me and my work in Washington over the last ten years, and it drives a number of other younger musicians in a way that suggests not an art form that is moribund or sickly—and not necessarily one just being born, either—but a thriving, energized field where possibilities are limited only by a musician’s imagination.