Aperio curates concerts that one night might feature contemporary chamber music from the U.S. (like the one I attended last weekend) and focus on the music of Nicaragua the next. The change in focus from one region to the next over the course of a season helps Aperio track and understand trends on this side of the pond as distinct from concert series that include European repertoire. 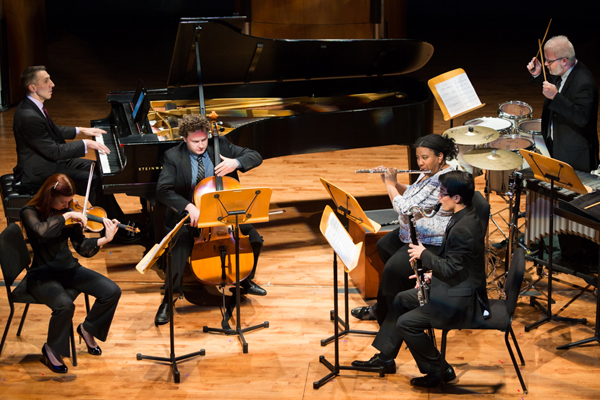 Aperio–Music of the Americas is an arts organization with a broad vision. “Dedicated to preserving chamber music literature through performances that showcase contemporary composers from the Americas,” Aperio curates concerts that one night might feature contemporary chamber music from the U.S. (like the one I attended last weekend) and focus on the music of Nicaragua the next. Certainly each of these countries have varied styles within their borders, but the change in focus from one region to the next over the course of a season helps Aperio track and understand trends on this side of the pond as distinct from concert series that include European repertoire. Michael Zuraw has been at the helm of Aperio for many years and, in addition to being a spectacular pianist, he has also consistently assembled one crack team of musicians after another to achieve his vision.
In his introduction to the evening, a program billed as “Indie-A-Go-Go–Vibrant Alternative American Works,” Zuraw indicated that some in the audience might connect with various musical references from the rock world that would show up throughout the night, but I think that the youngest might actually get more excited about hearing the opening work of the show, John Mackey’s Breakdown Tango. This work served as the source material for his orchestral work Red Line Tango which, in turn, became one of his most well-known wind ensemble pieces—a work played by many college and high school groups around the country.

Breakdown Tango began with driving, syncopated motor rhythms played by violinist Chloé Trevor and accented in the piano by Zuraw. Cellist Patrick Moore supplemented the texture as clarinetist Christian Schubert played the main melodic fragment of the opening of work. This largely chunky and visceral opening gave way to a lyrical breather before calling out the tango namesake in broad strokes across the whole ensemble, though primarily in the violin and clarinet. A brief return to the opening material brought the work to a close.


As the concert went on it became clear that the show was a marriage ceremony of sorts, with some things old, new, borrowed, and blue. Following the Mackey were the “borrowed” selections: “Three Songs,” which are arrangements of Radiohead tunes by Christopher O’Riley (of From the Top fame). For both composer and performer, it is tricky to avoid the hotel lounge vibe that solo piano versions of rock tunes might yield, but pianist Brendan Kinsella did a great job breathing life into arrangements that, in lesser hands, might deflate ever so slightly. Closing out the first half was Carter Pann’s Piano Trio No.1 (“Nicky’s Trio”) which featured some of the best orchestration and pacing of the evening. In four movements, it was arguably the piece that walked and talked most like a classical duck, but that characteristic worked most solidly in its favor. The opening movement, “Cowboys,” was packed with big open sonorities. High and lonesome in the beginning, it popped into virtuosic gear with giddy-up rhythms and virtuosic lines traded deftly between violinist Kirsten Yon and cellist Daniel Saenz. This tight communication continued into the second movement, which started in a similar vein as the first, though much more subdued. Here the energy of the violin and cello was tempered and more space appeared for Kinsella’s piano work. A gem of a third movement (perhaps less than 60 seconds and somehow recalling “What a Fool Believes” by the Doobie Brothers; a connection that surely must have only been in my head) acted as a brief palate cleanser for a fiery final movement. Following a brief intermission, two works by Michael Torke brought us something “old” and something “blue,” though not in that order. Torke’s Blue Pacific for solo piano is indicative of much of his work in this century. Clean and simple, the work started for all intents and purposes like a pop piano ballad centered largely in the middle range of the instrument and only venturing out by and by. As the work progressed, virtuosic passages and a more adventurous harmonic language lent depth and complexity to the initial melodic material. This was followed by the “old” piece of the night, Torke’s Yellow Pages from 1985. I haven’t heard this work in years and two things struck me as I listened: 1) I’d forgotten how hard the tune is and 2) I still don’t hear Van Halen’s “Jump” as a reference or source material. Not that the ensemble’s performance showed the former; in fact, they looked very comfortable and their playing was quite assured. I suppose the latter comes out in the accented upbeats, but to me it sounds like a piece all its own. As the ensemble flipped through the tonal phonebook, I couldn’t help but wonder what it was like to hear this in the mid-’80s–the bright harmonic language and motor rhythms still part of the preceding ten years, but the phrasing and harmonic rhythm part of the relatively new post-minimal sensibility. Though not as ancient as, say, the Mac [1], the piece certainly holds up and was quite well received.

And last but not least, the “new”est piece by the youngest composer of the night, D.J. Sparr’s The Glam Seduction, closed out the evening. Starting out with a harmonically reimagined but structurally spot-on arrangement of the opening gesture of Eddie Van Halen’s seminal guitar solo “Eruption” (including devastating introductory thunder drums courtesy of percussionist Luke Hubbley), this Van Halen reference was laid bare. No coy rhythms here. The piece segues quickly from the opening material to a rising line shared among Moore, Trevor, flutist Judy Dines, and bass clarinetist Sean Krissman. This heads-up collective motive returns several times during the work and serves as a chorus of sorts between solo sections for each instrument. Each player in turn does their best metal impression, though I think if the piece had a less evocative title [2] (and performance notes that obscured the origin of the musical material) it’s quite possible that the “metal” elements would be less obvious. In fact, there are many tender and quiet moments and sections throughout the work which set off the wilder and more provocative core and do give the ears a rest before things are cranked up once again. The piece goes out with a bang, as well as a huge swaggering coda that all but invites the audience (as Zuraw suggested in his introduction to the work) to break out their lighters and put their horns up.
Though I write for the most part about the USA (with a few exceptions) under the auspices of NewMusicBox, I’m interested to see what Aperio does to represent the rest of this continent and its southern counterpart. I’ll admit that despite my classical guitar background (of which a great deal of repertoire, contemporary and otherwise, is derived from Central and South American composers) I tend to think about contemporary music from an American or American/European perspective. Perhaps that’s simply my upbringing and education, or maybe I need to get out of the house a bit more. Either way, if this concert is indicative of the level of curation and performance that Aperio provides, I suspect there’s a whole world of music out there that they can show me.

1. Along those lines, it seems that the iPad on the piano (and the stage tech who has to carry it and a tiny new pedal out before the show starts) has officially replaced the Macbook on the stage in many new music concerts. Like all trends in music history these lines of demarcation are not always clear, so I suppose time will tell.

2. I’m by no means suggesting it should. I was seduced by this same glam in high school, and played tortured versions of “Eruption” until my parents couldn’t take it anymore.