“The San Francisco Symphony does ‘Mavericks’ every ten years; we do it every year,” joked Artistic Director Charles Amirkhanian at this year’s Other Minds Festival of new Music, the Bay Area new music community’s annual three-day get together. This was the 17th iteration of the festival, which has been running regularly with only a few skipped years since 1993. Each year a group of eight to twelve composers is featured in three concerts, several composers per night, with sets focusing on each composer in turn. 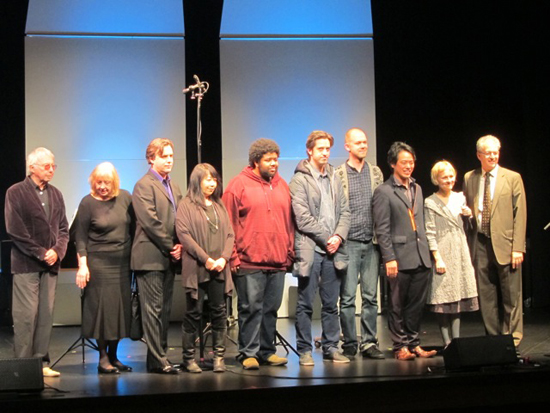 “Community” is frequently used these days by arts organizations as a buzzword, but OM concerts truly have the feel of a gathering of a certain community within the Bay Area. The sense of familiarity among those in attendance is immediately noticeable: people seem to be greeting old friends and colleagues constantly from the moment they arrive at the hall. Board members are publicly acknowledged for appreciation during the show. The announcements are informal and there’s a notable lack of pretense—when the raffle winners were announced, one was greeted from the stage by Amirkhanian with a homey “Oh, hey, Tony, nice to see you. Glad you could make it.” 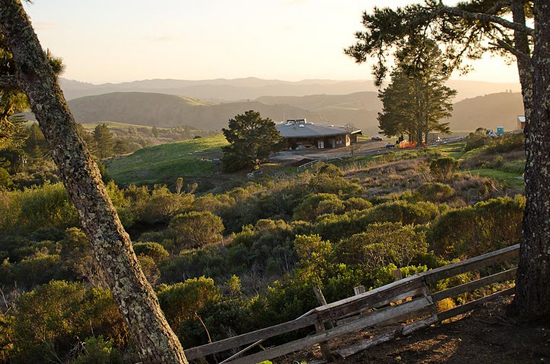 The Djerassi property. Photo by Richard Friedman via Kyle Gann.

This sense of community building extends to the festival composers and Fellows as well, who spend five days together at the Djerassi Resident Artists Program on a rural ranch about an hour south of San Francisco prior to the concerts. (Here are some charming and bucolic photos from previous years by Kyle Gann and Richard Friedman.) In fact, although the festival concerts are the most publicly visible component of Other Minds’ work, they are only a detail of a bigger picture in which international and intergenerational dialogue is encouraged among individual artistic creators.

I attended the second and third concerts this year, as well as the performance featuring the four Fellows’ work. (The first concert, with works by Torvund and Steen-Andersen performed by the Norwegian ensemble asamisimasa, I unfortunately had to miss due to illness.) Some sets were performed by the composers themselves (Budd, Mori, Sorey); others by the San Francisco-based Del Sol String Quartet, mainstays of the festival, and by members of the Magik*Magik Orchestra, a young, malleable instrumental ensemble with roots in the San Francisco Conservatory of Music.

The works presented were as wide-ranging as OM audiences have come to expect. (A full list of repertoire can be found here.) Concert 2 featured Coates’ Fifth String Quartet (two movements of which were composed almost exclusively using glissandi); a quiet, spare and introspective work by Budd for piano and bass; and almost overwhelmingly aggressive simultaneous improvisations by Mori on her laptop, Sorey on drums, and Ueno on vocals that included overtone throat-singing, death metal growls, and extreme high-register squeals. Concert 3 had Magik*Magik in different configurations, ranging from a percussion duo playing Kennedy’s First Deconstruction (in Plastic) on upturned Glidden paint buckets to a 12-person chamber orchestra configuration with string quartet plus bass and winds/brass. That was followed by improvisations by Sorey solo, first on a drum kit and then on piano, and the world premiere of Ueno’s Peradam for string quartet (who are asked not just to sing, but throat-sing). 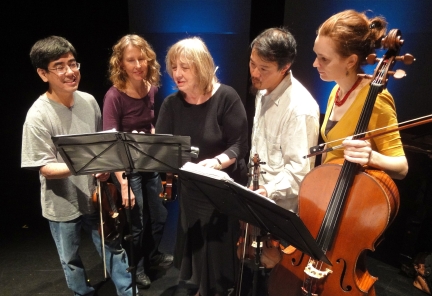 Though Other Minds has apparently cultivated an audience that knows that they are coming to hear something unexpected—attendance in the 410-seat Kanbar Hall at the Jewish Community Center of San Francisco was very respectable at the concerts I attended—the format of the concerts makes certain demands of the concert-goers. Because each composer is represented by a set that is approximately a half-hour long and often there are dramatically contrasting compositional approaches, there is sometimes a disjointed quality to the festival’s performances. In addition, the performing forces change from set to set, so the added time for changeovers and announcements affects the pacing of the performances significantly. For the listener, the result can be disorienting, and during Concert 2 especially I wished there were more of a sense of journey and connectedness throughout the evening. 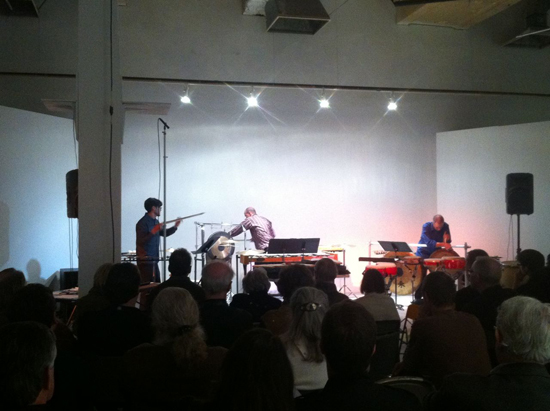 In that sense, the most satisfying performance event of the festival for me was actually the Composer Fellowship Concert, which was held at a small, 100-seat visual art space in the Mission called The LAB. Rootstock Percussion, a Bay Area trio, performed all the works on the program, which featured one work by each of the four Fellows—D. Edward Davis, Peter Swendsen, John P. Hastings, and Jen Wang—framed by pieces by John Cage. Having the instrumentation limited to percussion allowed each composer’s identity to come into relief in relation to the others’. While Swendsen’s Nothing that is not there and the nothing that is for bass drum solo and electronics (controlled by the composer via iPad at the back of the hall) took inspiration from the sounds of weather and seasonal transitions in Norway, Hastings created numbered grids for Terce that provided guidelines for the three percussionists to construct the work by playing wine glasses like bells and by bowing Styrofoam and large metal springs. Cage opened and closed each half, ending the program with Amores, Parts II and III—the only obviously pulse-driven pieces in an evening of percussion music. 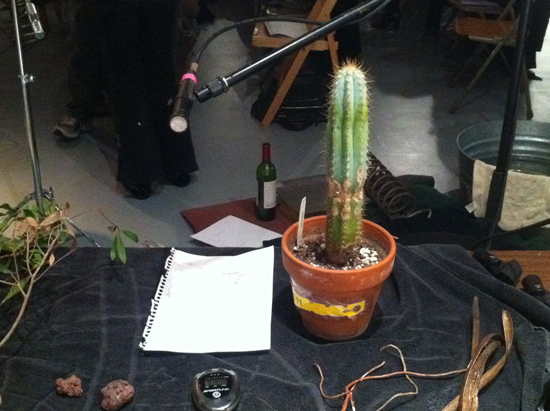 Cactus awaiting its star turn in Cage’s Child of Tree.

The Other Minds Foundation is in the process of digitizing its audio archive, and the results can be accessed for free online at RadiOM.org. Recordings of many past festival concerts and panel discussions are available, and the current festival recordings should be added soon. The site also includes a trove of archival material from KPFA-FM in Berkeley, where Amirkhanian was music director for over two decades.