An Rx for Improvisation

Improvisation offers valuable educational applications and allows students to get their feet wet in the world of new music without being tied down to some of the technical challenges inherent in much modern repertoire. 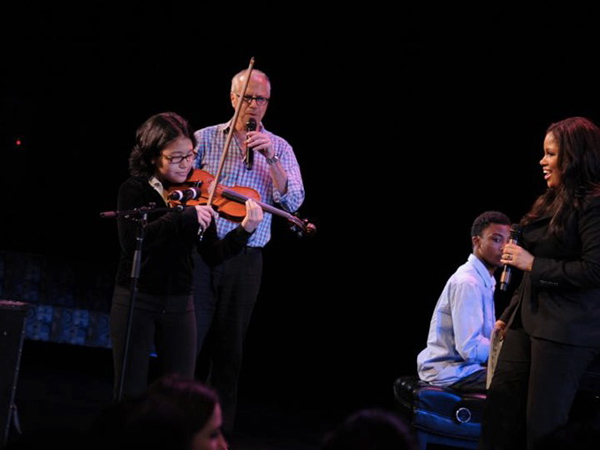 Face the Music and its spiritual sister, the Special Music School High School, give me a fairly regular dose of thrills. Of course, every teacher experiences them—the breakthrough moments—but I sometimes feel like I get an extra kick when a kid proves that there’s obviously so much life in an art form frequently declared dead.

When I first started FTM, I picked Terry Riley’s In C as one of our first pieces. Not a terribly original choice, perhaps, but I needed something that would work for the hodgepodge instrumentation that had come together. Once the kids learned the cells, we faced two persistent and related problems: Racing Through the Piece and the Wall of Sound.  It took over a year (not kidding) to work out these problems, and I remember the breakthrough rehearsal clearly. We had not yet managed to stretch the piece longer than 20 minutes, and then suddenly it was 45 minutes long. People were dropping out to listen to each other! They were trading motives! Finally, the improvisational element of the piece had taken hold. When we finished, the students cheered—they knew something profound had shifted. (And then the performances started getting longer and longer and longer…one famously clocked in at 90 minutes, held outside under a very hot sun.)

Fully notated music took hold of the group for the next few years—the thrill of discovering that kids could play that weird triplet rhythm at the beginning of Yo Shakespeare drove many of my repertoire choices—but we finally came back to improvising in the fall of 2010 with Cuban Impressions by Gregor Huebner. That work includes improv breaks for both a solo quartet of players and the accompanying orchestra, and there is a largely improvised Latin percussion part. It was a “toe in the water” experience for me and the players. Some of the students really enjoyed improvising, and for them the experience of hearing/watching Huebner improvise when he worked with the group was enough to stimulate them to new creative heights. For other students, there was clearly a need for more “support,” as they say in educational circles.

Though we undertook a couple of additional improvisation-related projects in 2011-12 (including one of our first serious student pieces, Zachary Detrick’s Blisters on My Fingers), it wasn’t until we collaborated with ICE on Artificial Life 2007 by George Lewis in January of 2013 that the improvisation bug really took hold of the ensemble. Fortunately, by this point I had been joined in running the ensemble by Vasudevan Panicker, our first managing director who is himself an accomplished improviser and composer.
“That was the piece where we were like, ‘Holy crap!’” Panicker responded when I asked him whether the students had gone farther than we had expected. Though eventually the project resulted in two very sophisticated performances—one with ICE and one with the Queens College Percussion Ensemble—initially he experienced some of the same difficulties that I experienced with In C. “At first it was loud and monotonous, with everyone playing at the same time,” he remembered. “And then eventually it became a piece with form, and dynamics, and even recognizable ‘themes.’”

The students were so enthusiastic about the project that Face the Music created “Improv Hour” during the 2013-14 season. This was an hour at the end of every Sunday night rehearsal during which students of different levels and backgrounds gathered to work on pieces that involved a significant improvisational component. Improv Hour served two purposes: it allowed us to further explore the educational uses of improvisation, and also it allowed students to get their feet wet in the world of new music without being tied down to some of the technical challenges inherent in much modern repertoire.

Improv Hour was Panicker’s project, and over the course of the year they worked on music he wrote (____van____, and Check No Eye), as well as charts by Miles Davis and Daniel Bernard Roumain. The spring semester was spent developing an interpretation of Rajesh Mehta’s visually stunning score for Songlines’ Jewels: Energy of Musicality, known to all of us more colloquially as “Triangle Piece” for the large triangle that forms part of the score. The Hour brought together students with all different backgrounds (classical, jazz, and rock) and with a wide range of technical and reading abilities. In spite of that, the group emerged as perhaps one of the crowning successes of the 2013-14 season; I joke with Panicker that, even when held up against the orchestras and the jazz band, his project was the one that emerged with the strongest sense of group identity.


The 2013-14 season turned out to be a banner year for improvisation because the opening of the SMS High School offered me an excellent opportunity to dig into the topic in the context of a music curriculum embedded in the school day. Partly thanks to a grant from the organization Composers and Schools In Concert, we welcomed Martha Mooke as our first-ever composer-in-residence. Mooke is a violist/composer/improviser whom I had come to know through a couple of workshops she had given to Face the Music students during the previous two years.

SMSHS studied and performed a few of Mooke’s pieces, including her string quartet Quantum and Ode to Ganymede, for chorus and instruments. Also, thanks to CSIC, Mooke wrote a brand-new work for the entire 9th grade class entitled SMSHS, which included a substantial improvisational component. Basically at a point right before the recapitulation, three of the pianists engaged in free improvisation over a whispered accompaniment in the rest of the orchestra.

Mooke has acknowledged that it was a challenge to get the three pianists to open up.  Once students reach a certain level of training, she commented, they become afraid of making mistakes. “That’s a learned habit, and it’s hard to overcome,” she admitted. “But once you open up the creative possibilities, and allow the player to explore his/her own voice, you are helping them to access their own toolbox, even if they think they don’t have the vocabulary or the tools.”

One of the violinists in the quartet that played Quantum was Reina Hondo, a shy SMSHS 9th grader who had first graced my doorstep as a Face the Music student a year and a half before.  Quantum includes instructions for the players to improvise within certain parameters. Hondo’s experience with Quantum was complemented by the opportunity to play Gregor Huebner’s Concierto Con Violin Latina with Face the Music. The piece, which has five movements, includes improv breaks for the soloist in each. We divided it up among three soloists (Hondo, Sophia Steger, and Paris Lavidis), and Hondo took the substantial middle movement.


In the first performance, Hondo successfully improvised, but it seemed like her solo licks mimicked those on Huebner’s recording, which she had studied. On the other hand, when we repeated the piece at a performance in June, her solo breaks were original, full-throated, and confident. It was a stunning transformation. She wrote to me about the experience: “Improvising cannot be good at first but it can be good the second time if you try it for yourself.” I should add here that her violin concerto experience was paralleled by that of several other students last year, including the other soloists on the violin concerto, Charlotte Whatley (the soloist on Huebner’s Cello Concerto), as well as the members of Quartet: This Side Up (who played Huebner’s improv-heavy Third Quartet).

In the spring, SMS High School was invited to perform at the day-long Grammy Camp Basic Training event produced each year by the Grammy Foundation. We were there to perform some music by Mooke as part of a set she had designed (to smash some classical stereotypes) that included a Bach excerpt, a rapping cellist, and an improvising student violist. At the end of the event, all of the students in the auditorium had the chance to take turns improvising over a chorus of “Brave” (originally recorded by Sarah Bareilles) featuring vocalist Nicki Richards and the Fordham High School All Stars.

Because this took place towards the end of a rather long day, I was out in the hallway checking my email—those of you who know me, roll your eyes here—when I heard this tremendous violin lick broadcast over the speakers. I looked at the monitor and saw that it was Reina Hondo! Perhaps I shouldn’t say this, but I enjoyed the fact that at that moment, she was smashing not one but two clichés: that of the “straitlaced classical musician” and the “quiet Asian girl.” But also, it was proof of a tremendous journey that she had made, partly as a result of her experiences in Face the Music and at the SMS High School.