When So Percussion started out, we had three prohibitions: no improvisation, no playing our own music, and no hand drums. We’ve since violated all of those rules in spades. 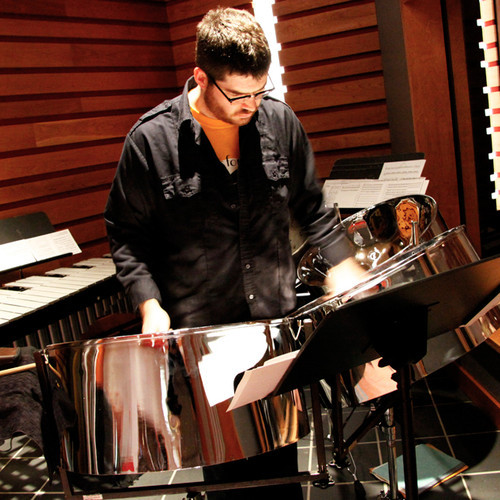 When So Percussion started out, we had three prohibitions:  no improvisation, no playing our own music, and no hand drums. Initially, the impetus for these boundaries was an attempt to define ourselves as a hardcore new music group made up of virtuosi.  We’ve since violated all of those rules in spades, although we work hard to perpetuate that original mission.

It wasn’t that we didn’t respect these categories. Actually, we established the hand drum rule specifically because we had so much respect for expert players of congas, tabla, and djembe. We felt that there would be no reason for anybody to come out to hear us pretend to play instruments that other performers had so thoroughly mastered.

The restrictions on composing and improvising had a similar genesis: other musicians spent many years on these crafts, just as we hunkered down honing our chamber music skills. We had an urgent need and desire to be among the best at what we did.  I think these early rules were actually helpful, because we needed a lot of time to devote to chamber music with scores.  We were trying to build a new vocabulary of interaction, a way of listening and rehearsing that took years to dial in.

Eventually, as school days morphed into the beginnings of a professional career, these restrictions made less and less sense.  The hand drum rule fell away quickly, and it is this peculiar prohibition that sparked my thoughts for this article. Almost every instrument we play as percussionists is borrowed from another culture, so one has to either find a way forward in playing them that feels good, or else give up completely.  We came to believe that it’s largely a matter of taste, that the context in which they appear is paramount.

I asked my colleague Josh Quillen, who studied steel drums both in Trinidad and in the United States, how he grapples with including those instruments in So Percussion’s music. His reply:

I rarely reference my cultural knowledge of Trinidad when playing steel drums within So Percussion. It actually helps me to avoid any baggage in that context (and mainly assumptions put on the instrument by others) and to help push me past what I know about the instrument.  Instead, I rely solely on what I learned about how to play the instrument.
With that said, if you’re going to use the instruments in a traditional manner, I say go for it, but that’s where you need to have some background in it in order to do so with any sort of credibility.  I feel good about teaching a steel band and recording traditional calypsos because I have a background in it, and I still work closely with people who are steeped in the culture, and are still teaching me about the instrument and its background.

Here’s a quick sample of the second movement of Steve Mackey’s It Is Time, written for So Percussion in 2009.  Steve and Josh worked hard together to capture the essence of the steel drums, while never letting the music descend into cultural parody.


As Josh mentions, another way to reconcile incorporating an instrument into your music is to find a way to use its sound and quality as an abstract resource, stripping it of most stylistic references.  Many European modernists such as Xenakis discovered new qualities in borrowed instruments, such as the thumping yet warm sonorities of congas and bongos played with sticks in the “Peaux” movement of his massive sextet Pleiades.  In this case, the instruments are incorporated with many other kinds of drums into a new composite instrument, and the manner in which they are played bears little resemblance to their original context.
I feel that as long as we are not pretending to play the specific kind of music that those hand drums were originally used in, or casually mimicking that music, there is nothing wrong with incorporating the sounds of the instruments into the already messy and diverse palate of the percussion ensemble.

As Josh also outlines, one of the most effective ways to feel at ease about knowing how to include an instrument or a tradition into your music is to study it!  If you’ve ever spent time getting your butt kicked by a Balinese Gamelan master who is requiring you to memorize extremely long melodies by ear, or exposing yourself to the fathomless depths of complexity embodied in the talas of Hindustani music, or playing with 120 other steel drummers at Panorama in Trinidad, it is nearly impossible for you to condescend to that music, or to incorporate it carelessly into your own music.

The issue of cross-cultural dialogue isn’t only relevant to crossing geographical boundaries.  Sometimes even collaborating within sub-cultures has its own negotiations, where effort is required to find common ground and articulate mutual expectations.
In 2005, we struck up a relationship with the duo Matmos, who have been steady collaborators ever since.  In the broader sense of culture, we had a lot in common: we spoke the same language, had all grown up in and been educated in the same country, etc.  We diverged in one key area, which was that Drew and Martin of Matmos had not had any formal training in classical music.
But their music was fascinating!  They bowed rat cages, made tracks out of liposuction sounds, and somehow blended the curiosity of musique concrète (which they are extremely aware of) with a smile-inducing and infectious feel for making great beats.  We loved the conceptuality and natural musicianship of their music, which we first got to know through their work on Bjork’s Vespertine album.


Their musical culture has its own rules and expectations, some of which they purposely break.  I quickly realized that I knew very little about that culture, just as they didn’t know much about the endless Beethoven and Monteverdi that I was listening to in order to prepare for my doctoral exams at Yale.

I distinctly remember talking to Martin about some of their favorite music, as I was genuinely curious.  He rattled off so many names I had never heard of that I just asked him to boil it down to the Matmos influence essentials, the first five things I should listen to.

He looked at me like I had just landed on planet Earth.  He might as well have said to me, “Who is Mozart?”
Martin and Drew’s instrument layout in performance reads like a time capsule of the past 30 years of electronic music.  They hang on to reliable instruments that they love, refusing to clean the slate every time a new technological update is available.  Over years of conversation and experimentation with them, we have started to incorporate some of those instruments in our music as well.  Without their influence and knowledge, I’m not sure we would have felt comfortable with the baggage of a Korg or V-Synth suddenly appearing in our percussion ensemble.

There is an organic process in bringing cultural perspective to what you do.  No rule or blanket theory is going to address everything that’s possible:  we have too many interweaving contexts to sort out a unified approach.    As a young group, So Percussion sought a concrete definition of what made us a new music group, and an answer to why that category mattered. It seemed to us that jumping into all of these other ponds would be confusing or messy.  In truth, it probably has been.  And it has not always been successful!

But it has been worth it, at least to us. Here’s a performance of Water, a piece that we wrote together with Matmos.  It incorporates both Matmos’ electronic elements and Josh’s steel drum playing.