All Venues Great and Small

Kevin Puts’s new work, How Wild the Sea, premiered in Austin by the Miro String Quartet and the University of Texas Symphony Orchestra. And Los Angeles-based composers Sepand Shahab, Colin Wambsgans, and Michael Winter battle fierce winter weather to bring their own music to a small Austin club. 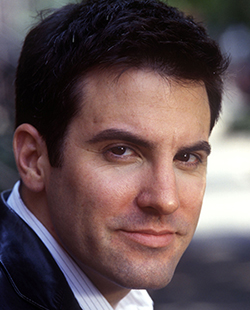 Whenever I attend a concert at the 2,900-seat Bass Concert Hall in Austin, I like to stand up a few minutes before the show starts and have a quick look around. Before moving to the Long Center several years back, Bass was the home of the Austin Symphony Orchestra, an ensemble whose ticket sales managed to put more than a respectable dent in the available seating chart. However, on other performance occasions the balconies can be sparsely populated, and so it was here that my eyes rested minutes before the downbeat of the University of Texas Symphony Orchestra’s most recent concert. A Wednesday night offering at the close of the semester could easily be all tumbleweeds out in the house, but the UTSO doesn’t mess around, and the premier of Kevin Puts’s new work, How Wild the Sea, was enough to all but fill the house.

Puts is no stranger to Austin. He was a faculty member in the composition department at UT prior to his appointment at Peabody, and he has previously worked with other members of the Austin arts community—including last year’s collaboration with Conspirare. How Wild the Sea was the result of a commission from Texas Performing Arts, the St. Paul Chamber Orchestra Society, City Music Cleveland Chamber Orchestra, ProMusica Chamber Orchestra of Columbus, and the Naples Philharmonic, with additional support provided to Texas Performing Arts by the Andrew W. Mellon Foundation. As part of a three-year initiative, the Texas Performing Arts commissioning project has yielded new works from John Luther Adams, Dan Welcher, and a forthcoming Nico Muhly commission, as well as residencies by eighth blackbird and Brooklyn Rider. When asked to contribute a concerto to this list, Puts’s first thought was to write something for the Miro String Quartet, UT’s quartet-in-residence and for whom he wrote the work Credo. As such, Puts’s new work is a concerto grosso of sorts, which is a bit of a risk even for a Pulitzer winner who, one might assume, can write his own ticket. Puts is well known for his engaging and approachable music, but the market for this particular arrangement is, arguably, modest. Though largely a logistical issue (how easily do you fit a quartet’s touring schedule in with an orchestra’s yearly offerings?) another concern is, shall we say, positional? The Miro stood for the entire performance, and though a standing group is not unprecedented, it’s certainly unconventional and could be a tricky thing on a tour, not to mention having to haul around a big box on which to place the cellist. I saw the Miro and Shanghai quartets placed in an unconventional configuration last year, and while both groups rose to the challenge it’s always a risk to alter the fundamental workings of a chamber group. So, how’d it work out?

Great. It was a truly fantastic piece.

Not just “solid” or “attractive” or some such vague terminology, but really, really great. The work was based on reflections Puts had after seeing footage of a Japanese man sitting helpless on the roof of his house as it was carried away by the tsunami of 2011. Representing the elderly man, the Miro began the piece alone with interlocking minor scales falling quietly through rising arpeggios. This delicate texture was eventually picked up and overtaken by the orchestra, the sense of proportional change quite stunning and made more palpable by a subtle but distinct harmonic modulation. The pace of the work increased and was marked by brass and percussion providing a bed for a return of the quartet, this time with a peppering of sixteenth notes. The second movement seemed less directly related to the suggested narrative of the first and abandoned its formal parry and thrust. Emerging attaca from the first, the quartet and orchestra traded fours seamlessly, flying along at a breakneck pace. Puts is not only a fantastic composer but also a superior orchestrator, and his use of color (in the winds in particular) and natural sense of balance among the instrumental choirs (much less between the quartet and the orchestra!) was uncanny. I don’t know if this piece will live past its commissioner’s performances, but anyone who can overcome the logistical difficulties will be rewarded with a wonderful work for both performers and listeners. 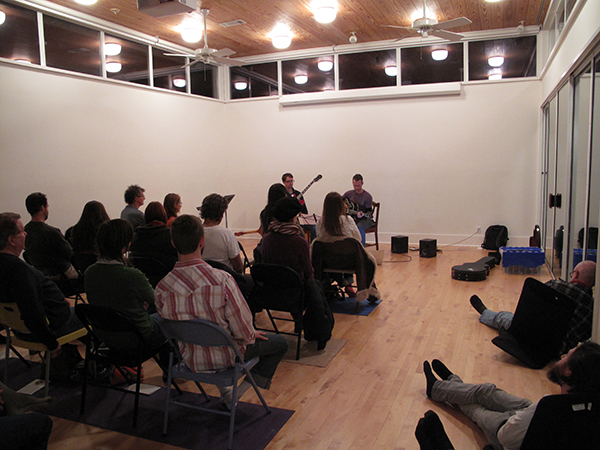 As regional editor for the greater Austin area (in which I’ll include Dallas, Houston, and San Antonio, among others) I can tell you that while the music is great, the commute is drag. Long trips up and down one highway or another can be tempered with the right playlist or podcast, but the pain of hours spent in a car cannot be denied. However, I’ve got nothing on Los Angeles-based composers Sepand Shahab, Colin Wambsgans, and Michael Winter who, during a particularly thorny winter storm (and you have to remember that Texas has little infrastructure for such relative rarities), recently spent nine and a half hours in a car getting from Denton (a bit northeast of Dallas) to Austin—a trip that typically takes between three and four. The lion’s share of this trip was spent along the 40ish-mile stretch between Denton and Fort Worth; a nail-biting journey during which I-35 became a hellish slip and slide. Fortunately, all three composers arrived no worse for wear (and only a bit late, really) at the small venue in the neighborhood of Travis Heights. Measuring about 20’x100’, the private studio space held around thirty people, counting performers, and was a perfect, intimate location for the composers’ offerings.

Shahab’s Divisions on a Ground was performed by James Alexander on viola, Brent Farris on upright bass, and Travis Weller on violin. Written “for 2 or more bowed strings, sine waves, field recordings, and a metronome,” this performance was set to have a fourth player, but the weather did not permit. The work started with a faint and rising recording of an ocean joined eventually by Farris. The recording bore little resemblance to the “Gentle Ocean Sleepy Time” setting on your nighttime noisemaker, and was closer to a solid wall of constant sound. Farris’s entrance was met with another recorded sound (perhaps an airplane?) which was initially about a half step off the bass pitch resulting in subtle oscillations. A gentle rising chord in the strings developed into a slow resonant counterpoint, with voices leaving and returning and never fewer than two players at once. Long silences divided sections in which Shahab struck a balance between artificial and found sounds, finding common ground between the two sources. 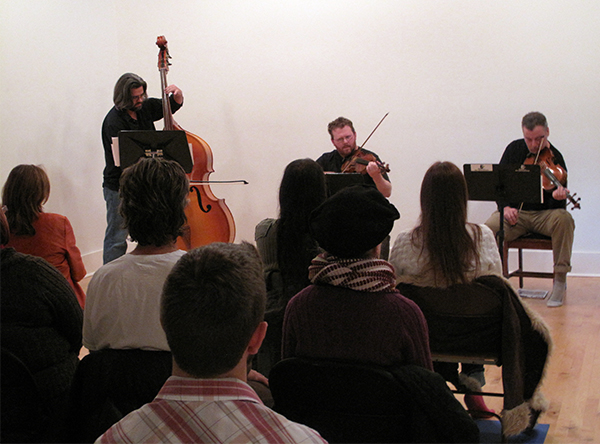 Michael Winter’s Chorale and Finely Tuned Resonators for four electric guitars and sine tones was composed with larger forces in mind, but—along with the wayward violinist absent from the first piece—several of the guitarists lined up to play the tune were also missing. Fortunately, the work allowed for a solo version which was performed by Chaz Underriner. Wielding an Ebow over his semi-hollow body guitar, Underriner began the work against a sine wave beating. Plush pulses in a steady succession moved steadily higher, building to a shimmering crest populated by a lightly sawing sound which somehow resembled crickets. A largely textural work (at lease this version), Chorale still lived up to its namesake with a coda-like section involving more rapidly changing timbres, quick changes on the eighth note sounding like the pull of organ stops in place of the slower harmonic rhythm of the bulk of the work.

The final work, This Is A Long Drive for Someone Who Overthinks Things by Colin Wambsgans also required a bit of on the spot alteration to account for elements beyond the performers’ control. Originally intended to last over an hour and to include a video component, Long Drive was condensed to a 36-minute version for two guitars and two-channel fixed media with no video. Based on a candidly recorded conversation about a Modest Mouse album (highly influential among his peers) from the end of Wambsgans’s college days, the work started with the recording intertwined with the live guitars. Wambsgans and Underriner at times played notes in a pointillistic fashion, occasionally manipulating the tuners to realize a sort of measured vibrato, but for the most part the guitar parts were extremely sparse throughout the work. Though there were sections in which the recorded discussion of the music was echoed in the music (as in the vibrato), as the piece progressed, the ratio of live performance and electronic manipulation to pre-recorded dialogue became decidedly one-sided. It eventually morphed from the Modest Mouse dialogue into a monologue (from a mentor I believe) about the nature of music and composition which, while fascinating, seemed to go down a decidedly different path than the initial material. It can be challenging to get a complete sense of a work from what was essentially an arrangement, and I look forward to hearing it sometime in its full form complete with video to get the full effect.

While certainly distinctive in their own rights, Winter, Shahab, and Wambsgans did present a “sound.” Though Wambsgans work had a Presque Rein vibe with its electronic recordings largely laid bare, and Winter and Shahab played a bit more of a game of “guess the source” by mixing sine waves and natural sounds, there was still an organic element to the marriage of electronics and live play among the works that tied them together and made for a cohesive evening of chamber music. And were it not for the shuffling of the order of works and a few required changes, one would never have known what the composers went through to present their music that night. The show must go on, indeed!