Advocacy and Communication
NewMusicBox
Written By

Is paying complete attention to someone else (e.g. listening to their music quietly) an act of subservience that ought to be discouraged? Or does a passive though total experiential immersion allow for a greater understanding of the world and all the disparate people who inhabit it? Might the latter sometimes also lead to the desire to create something that we hope that others would want to pay attention to?

I had something of an epiphany about how the various parts of my life relate to each other last week when I gave a presentation both about my own music and my writings and talks concerning the music of others for the composition seminar at Yale University. The more I’ve thought about that epiphany, the more I’ve wondered if it has larger implications for how artistic experiences are created and communicated to others.

As a writer and speaker about music, I have pretty firmly established my working methods as being advocatorial rather than critical. I’ve long believed that my own opinion about a piece of music (or anyone else’s opinion for that matter) is far less important than the piece of music itself and the person/people who created it. I tend to distrust the received wisdom culled from arbiters of taste (self-appointed or otherwise) only slightly less than my own personal taste which can all too often get in the way of experiencing the ideas of another creator on his or her own terms. So I’ve endeavored whenever I write or talk about something, or whenever I talk to someone about his or her work, to try to describe the work rather than to evaluate it and, in conversations, give the creator the opportunity to speak on the work’s behalf.

This kind of openness might perhaps seem antithetical to the process of composing music which is, after all, a sharing of one’s own personal musical aesthetics with the world. Undeniably there are specific musical ingredients that I feel pretty passionate about and which I therefore explore quite a bit in my own music—microtonal intervals, repetition (whether actual or perceived), vocal melodies that are based specifically on the pronunciation and meanings of the words sung, permutational patterning (whether based on themes, scales, or tone rows), oddball rhythms (particularly quintuple and septimal time), metric modulation, and even occasional indeterminacy. At the same time, though there’s a lot of theory behind much of what I compose, I try my best to always make whatever technique or process I explore clearly audible.
At Yale last week, a student asked why it was so important to me that my music communicate so directly even though it sometimes incorporates somewhat esoteric techniques and processes. And then it dawned on me: when I write about other people’s music, my goal is to advocate for their music; when I write my own music, my goal is to advocate for whatever techniques I’m exploring. When I set texts, my goal is to advocate for those words. For me, it’s actually all the same thing. The more music I hear by others, the more ideas I’m inspired to pursue on my own and the more I pursue certain of those ideas the more I want to ask others about them. Isn’t this what we all do, either as creators of or respondents to artistic experiences? Everything emanates from listening.

Then on the train ride back from New Haven, I started reading New Zealand musicologist Christopher Small’s seminal 1998 book Musicking, which is a scathing attack on how orchestral music is performed and listened to. Though Musicking had been on my reading list long before Small’s death in September 2011, I was not quite prepared for the book’s intensity, especially after a wonderful day at Yale that helped me clarify my approach to music. Here’s a sample of Small’s argument:

“What for members of the audience may at its best be a transcendental experience of communication with a great musical mind, for the orchestra members may be just another evening’s work and even, for some, a time of boredom and frustration. Whatever the event may be celebrating, it does not seem to be unity, unanimity or intimacy but rather the separation of those who produce from those who consume…”

Earlier in the book he decries concert hall construction that ensures a separation between performers and audience and a seating arrangement that makes it difficult for attendees to do anything else besides merely listen to the music. Though I was somewhat baffled by the first concerts I attended back in my early teens, I very soon grew to love how the format allowed for a really deep absorption of sonic information that was not constantly interrupted—either by someone asking you to buy a drink or other attendees loudly having a conversation which makes it extraordinarily difficult and at times impossible to fully process the music being performed.

I have not yet finished Musicking and will probably have more to say about it. I’m now up to the chapter titled “Summoning Up the Dead Composer” which I’m sure will be a doozy. As a composer and an advocate for the music of other composers, primarily those who are still alive, I have quite a few issues with the culture of orchestral music concerts which are all too rarely concern themselves with the music of the here and now. That said, I wouldn’t want orchestras and large concert halls to go away—quite the opposite. I want them to let more of us in!

Small was hardly the first writer to make this analogy, yet I find it particularly troubling that someone so attuned to the importance of music in human society (as he proved himself to be in his first chapter) would come to the conclusion that unimpeded listening is a form of submission that is ultimately bad for people. A similar argument could be made for us not looking at paintings or reading books (including his). Ultimately, taken to its logical conclusion, such an argument would have us never pay full attention to anyone else. I fear all too many people are encouraged not to pay sufficient attention to others these days which has resulted in a world where political discourse is often reduced to binary echo chambers.

On Saturday afternoon, however, I found a pleasant refutation of experiential immersion as subjugation during an exhibition at New York City’s Museum of Art and Design (MAD), a place I had never before visited. What got me to finally attend was an exhibit devoted to perfume. (Readers might recall how my attending a performance of the Scent-Opera—a collaboration between composers Nico Muhly and Valgeir Sigurdsson, “librettist” Stewart Matthew, and perfumer Christophe Laudamiel—triggered a summer-long exploration of perfume that led me to think about music somewhat differently.) MAD’s presentation, which unfortunately closed on Sunday, might offer the next step toward refining that line of thinking. 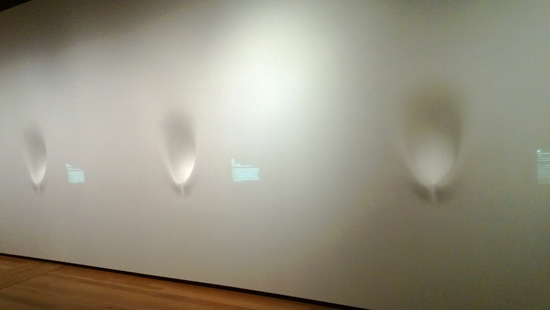 Is sticking your head inside one of these indentations to experience a perfume an act of discovery or submission?

The exhibition consisted primarily of an empty wall with twelve indentations for visitors to stick their heads in to smell twelve specific perfumes created between the years 1889 and 2010. A brief text about each of the perfumes was projected onto the empty wall but only for short periods of time. I found it impossible to read each of the blurbs in only one go and had to wait for them to re-appear. Similarly, an introductory text appeared and then disappeared on the floor. (A side room offered a monitor displaying video interviews with the perfumers, as well as vats of each of the twelve perfumes on display in the main exhibition; visitors were allowed to dunk paper into the vats in order to smell the perfumes for a more extended duration, though even when smeared on paper the perfume will fade.) By turning the process of reading the texts about the perfumes into an experience as fleeting as smelling them, MAD created a remarkably apt way of describing the ephemerality and elusiveness of olfactory perception. Of course, music is as ephemeral and elusive, perhaps even more so in a live performance which you can’t even stick your head into again to rehear. 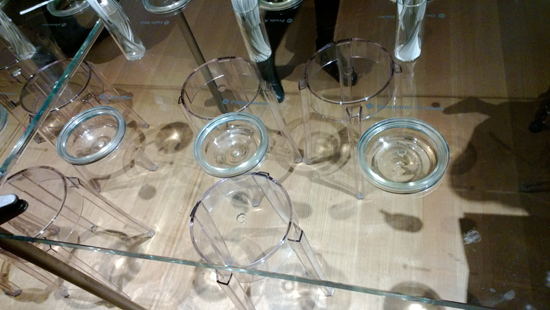 Even if you save the paper on which you were allowed to blot drops of perfume, they will eventually lose their scent.

During the hour I was at the exhibition, I witnessed people of all ages willingly sticking their heads into those indentations with curiosity and delight, though it was an even more submissive act than sitting in a concert hall. Then again, it was very instructive to watch and listen to the videos and hear perfumer Ralf Schweiger enthuse about the aroma of sloths, reveling in how they smell like hair and dirt, only then to confess that much as he likes their fragrance, including it in a perfume is problematic. As he opined, “You can’t push the envelope too much because people won’t like it.”

Again I was reminded of all the sounds we love as composers and how we attempt to include them in our music either fully conscious of or completely oblivious to how they will be perceived by others, depending on our aesthetic inclinations.