Before I signed on to the Seattle Symphony’s Sonic Evolution project, the orchestra had decided that this year one of the works would include a soloist, and I was invited to work with Alan White, long time drummer of the band Yes. My initial thought was, “How on earth am I going to deal with an honest-to-goodness rock star?”

More and more frequently, orchestras and other ensembles of all sizes and shapes are embracing thematic programming that in some way strives to forge a connection with communities beyond the concert hall. This can take many forms, such as concerts specifically for children, having the orchestra perform in a public space to honor some anniversary or event taking place in their resident city, or by incorporating musical forms other than classical music into a concert setting. The work I composed for the Seattle Symphony was part of such an effort. It was commissioned as part of their Sonic Evolution project, which asks composers to create new works which reflect upon the past and future of the Seattle music scene. Before I signed on to the project, the orchestra had decided that this year one of the works would include a soloist, and I was invited to work with drummer Alan White. The long time drummer with the band Yes, Alan has lived in Seattle for over 30 years with his wife and family, and is a popular and well-loved figure in the local music community. The work would not be a concerto, but rather, there would be a drum set presence through the piece, and he would have a short solo.

Working with Alan was an amazing and inspiring experience that was at times totally easy and at others insanely challenging. The easy part stemmed from the fact that Alan has a very relaxed and easygoing personality. At the beginning, before we actually met, I thought, “How on earth am I going to deal with an honest-to-goodness rock star?” Well, that part was no problem; we got along famously. After playing with Yes for what is now 40 years (!!), if there is one thing he can do, it’s collaborate. The challenge lay in the fact that he doesn’t read music fluently. His entire musical existence has happened by ear! Has anyone out there ever listened to the third side of Tales from Topographic Oceans? Can you imagine memorizing that?! Insane.

Anyway, I decided to work him into the piece by creating structured improvisations within certain sections of the music. Together we worked out rhythmic material that served as a basis upon which he could play more freely. The drum set had specific points at which to start and stop in the score, and I wrote material for the other three percussionists that served to guide Alan into and out of his sections. In addition, because it seemed important to maintain a drum set sound even when Alan wasn’t playing, I ended up making the entire percussion section into one big slightly off-kilter drum set by splitting the different parts like snare, cymbals, and kick drum between the other players and mixing up the types of drums used amongst them. The kit sound expanded and contracted to meet the needs of the rest of the musical material. With all of this in mind, I decided to place Alan’s drum kit with the percussion section at the back of the stage, raised on a platform so that the audience would be able to see him playing. During the concert there was a spotlight on him during his solo! It was fabulous: 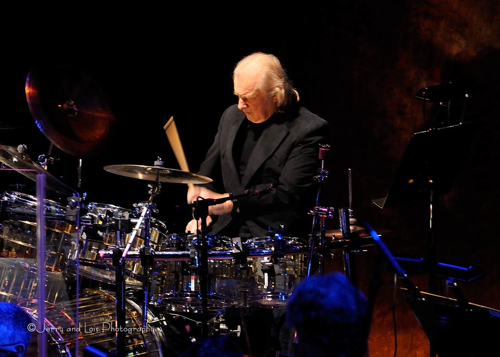 When the piece was finished, along with a MIDI mockup (yuck!) of the piece, I sent Alan the full score plus a special drum set part that, in addition to all the information a part generally contains, also had copious text instructions such as “STOP after seventeen bars of this!” I also marked lots of clock timings, so that he could listen to the MIDI audio and know exactly where he needed to be. He listened obsessively to the mockup recording for months (I have already sent my apologies to his family), and when I arrived to work with him right before the concert, he had things totally under control. In the end everything worked out, and here are some things that we both learned during the final period of rehearsals:

It is LOUD up in there.
We both were well aware that being on stage within a full orchestra is one of the loudest experiences anyone will ever have (Alan said that playing with an orchestra is much louder than playing in any amplified rock band, even in a huge stadium), and that made his experience difficult. Suddenly playing live with so many other musicians is mind-blowingly disconcerting—even seasoned performers of classical music will attest to this—and nothing sounds the same on stage as it does in the audience or on any recording. He had trouble hearing the cues he had become accustomed to, and had to work fast to get acclimated. There really is no way to recreate the experience of playing within a live orchestra. You just have to be there.

This is also a very real issue to consider for composers who are creating their own instrumental parts. Will the performer be able to actually hear your cue? Think about where the instruments are placed; if there is a harp cue in a trombone part, what are the chances that the trombonist is going to hear the harp? They are usually placed across the stage from one another, and there are lots of instruments between them. If any other instruments are playing, even softly, it is very likely that the harp cue will be totally inaudible to the trombone. Alan’s cues were being played by percussionists right next to him and they were still difficult to hear! During the process of choosing cues, always bear in mind where instruments are placed relative to each other, and what else is going on around them. Attending rehearsals—lots of them—of large ensembles is a good way to get a feel for the sonic realities of performance.

Drum sets are loud too.
One thing I didn’t mention in my last post about addressing the orchestra is that when I stepped up onto the podium, I saw that the drum set was enclosed by a wall of plexiglass! This was surprising, but it was intended to prevent him from blowing the orchestra out of the water—especially the woodwinds, whose ears were right in front of the kit at drum head level. The unintended consequence of plexiglass was that it amplified the drum kit sounds to Alan’s ear, making it even harder for him to hear what was happening around him.

Following a conductor is hard.
If it’s not something one does regularly, it’s really, really difficult. It has nothing to do with the quality of the conductor; it’s the nature of the beast. In a rock band setting, the drummer basically IS the conductor, further complicating the orchestra scenario.

There is no substitute for rehearsal.
Alan pointed out after our first rehearsal that before Yes goes out on tour, they rehearse together eight hours a day for about a month solid before they even set foot on a stage. And those are usually songs they already know! Although I was aware of this, I didn’t completely register until that moment how foreign the experience of two speedy orchestra rehearsals must have been. I now have even more respect for his professional attitude and ability to quickly adapt to a very different musical setting.