Adventures in Orchestra, Part 1: Locking Down the End Game
NewMusicBox
Written By

Adventures in Orchestra, Part 1: Locking Down the End Game

I have been keeping notes about what I learned during the process of creating my orchestra piece, and there are so many things that could be helpful to others that I wanted to begin putting them out there for other composers who are or will be working with an orchestra for the first time. 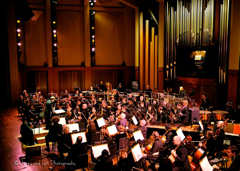 For the past many months I have been avoiding writing much about my recent project with the Seattle Symphony; in part because I was trying to, you know, get the music done, and also because I suspect that constant chatter about one’s own projects would not be the most interesting use of this space. However, I have been keeping notes about what I learned during the process—about every aspect of it, from start to finish—and there are so many things that could be helpful to others that I wanted to begin putting them out there for other composers who are or will be working with an orchestra for the first time.

This is a general list of things that came about after having finished the music, during the making of parts, and the final week of production and rehearsal:

1. Make a special “parts score” from which instrumental parts are made.
I feel a bit silly mentioning this since it seems so obvious after the fact, but I composed more than one large-scale work before realizing that this makes life SO much easier when it comes to generating parts. Basically, you make a copy of your full score, and then tweak the details (like measure number frequency/style, adding cues for each instrument, etc.) so each part can be efficiently extracted without requiring tons of additional editing.

2. The orchestra music librarian is your new best friend.
Whether you are creating your own score and parts, or even if you have a copyist, trust no one more than that orchestra’s music librarian. They know exactly how your score and parts need to be formatted, and there are details that may vary from orchestra to orchestra that s/he can tell you about. For instance, there are ways one could display measure numbers on parts that would be fine for one orchestra, but not so much for another. Make contact with the librarian early in the process, find out if there are specific requirements that you need to be aware of, and—this is really important—send a sample part before you get rolling on the full set. That way if something in the layout/presentation needs tweaking, you can easily incorporate that into all the parts as you go.

3. Hire a proofreader.
Whether or not you use a copyist or do everything on your own, I highly recommend using a good proofreader. I know that by the time I have finished a score and parts, I have absolutely, completely, without a doubt lost all powers of discrimination regarding the score, and I have to have another set of eyes on everything. Had I not used a proofreader (thanks, Gilbert!!), I could have been in big trouble during rehearsals. This will set your mind at ease, and prevent the rehearsals being stalled to answer silly questions about accidentals or other musical instructions.

4. Understand the rehearsal process, and be ready to make quick decisions.
As I mentioned in another post, orchestra rehearsal time is extremely limited. For this project, my piece received two 30-minute rehearsals, which is actually quite luxurious for a professional orchestra. However, putting together any composition that involves upwards of 80 people in that time span is no easy task. The best analogy I can think of to describe the feeling of hearing a new work come to life within this context is that of (I can only imagine) a father-to-be experiencing the birth of a child; excited, frightened, and helpless. It is both magical and terrifying. Find out how your conductor prefers to run rehearsals (I simply asked a friend who plays in the orchestra) and be prepared. The conductor might invite you to the podium to speak to the orchestra, or s/he might prefer that you address her or him directly, or maybe you just meet for a few minutes one-on-one after the fact. Respect their methods; at that point, the conductor knows your score better than you do, and wants to make it work just as much as you do.

During the first rehearsal of my piece, conductor Ludovic Morlot flew through the score, and I sat in the hall following along, dog-earing pages of my score and circling anything that I thought needed a fix. As this was happening, I was taking mental notes about what items would receive priority, because I knew that I would have about 60 seconds to tell the orchestra things I wanted to change. As a colleague advised beforehand, “Write down eight or ten things, and pick the most important two or three.” As it turned out, I didn’t interact with the orchestra until the second rehearsal, but in the meantime I sent my notes to Morlot, and by the second go-round the primary adjustments had been made, and I was able to focus on other things from the list.

5. Have your “elevator speech” ready to go.
Chances are that before, during, or after the concert happens, you will be asked for an interview, to do a pre- or post-concert question and answer session, or to meet orchestra board members or donors. Be prepared to talk about your new composition, and about your music in general, in a clear, concise, articulate manner. Don’t try to “wing it”—practice! Have talking points in mind, clip the use of “um” and “like”… in other words, make sure your words sound as good as your music.

I hope that others will share their experiences and advice in the comments section! Stay tuned for more adventures in the coming weeks…