A Temple for the Familiar
NewMusicBox
Written By

A Temple for the Familiar

The centerpiece of the concert I attended on Saturday night was Tchaikovsky’s Symphony No. 5, a piece of music that is performed almost every season by virtually every orchestra in the world. While I attended the concert because of a new work on the program, I have to admit that most of the people in the audience wanted to hear Tchaikovsky.

Though I’ve lived in New York City all of my life and Newark is only a 20-minute train ride away, I’ve hardly spent any time there. Aside from a workshop performance of a piece of mine there over a decade ago, I have pretty much traveled to Newark only to get on an airplane and go somewhere else. But over the weekend, my wife Trudy and I ventured there to hear one of the East Coast premiere performances of Steven Mackey’s piano concerto Stumble to Grace at the New Jersey Performing Arts Center (NJPAC). Although Trudy—who was born and raised in Hong Kong—had been there once before, this was actually the first time I had ever attended a concert at NJPAC which is now in its 16th season. 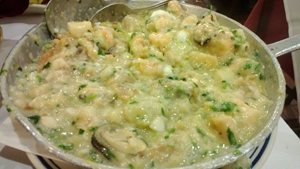 Going to Newark this weekend not only was my first experience of NJPAC, it also introduced me to Açorda de Marisco

It’s never too late to rectify a sin of omission, however, and it was a great trip. NJPAC is quite an impressive hall, and it was thrilling to hear a live performance of Mackey’s piece—which received a committed and exciting performance by the New Jersey Symphony Orchestra (led by Jacques Lacombe) and soloist Orli Shaham—after having studied the score in some depth last year. Equally thrilling was our brief exploration of the nearby Ironbound district before the concert, especially our dinner at one of the neighborhood’s celebrated Portuguese restaurants, Seabras Marisqueira. I’ve yet to visit Portugal and have not eaten Portuguese food in decades. As far as I can remember, it was the first time I had ever tasted two of the most famous national dishes: Carne de Porco à Alentejana, which is cubed pork and clams braised in a garlic, white wine, and fresh coriander sauce; and Açorda de Marisco, a traditional Alentejo “dry soup” consisting of shrimp, clams, mussels, scallops, and cubed Portuguese bread crowned with a poached egg.

I’m making a point of all this because I’ve devoted my life to exploring things that are unfamiliar to me. It’s why I am always excited to hear a new piece of music, read a new book, visit a new museum or art gallery, try a new cuisine, or to travel to a place I have never before visited. And every now and again that unfamiliar place is practically right next door. However, I am often made aware—remarkably, at this late date, often much to my surprise—that most people do not share my unbridled enthusiasm for new experiences and derive the greatest pleasure from reacquainting themselves with things they already know.

Case in point: the centerpiece of the concert on Saturday night was not Steven Mackey’s concerto but Tchaikovsky’s Symphony No. 5, a piece of music that is performed almost every season by virtually every orchestra in the world. The concert was, in fact, titled “Tchaikovsky 5,” and it almost escaped my radar because that was also the subject line in the initial press announcement I received about the concert. Don’t get me wrong here. I actually like much of Tchaikovsky’s music, particularly his operas and songs; however, understandably, a concert advertised as featuring a performance of his Fifth Symphony would not be the event that would finally get me to visit NJPAC for the very first time. However, I have to admit that it was Tchaikovsky’s Fifth Symphony that most of the people in the audience wanted to hear. Mackey’s piece and its performance deservedly received resounding applause, and the composer was on hand to take several bows. But after the Tchaikovsky, which was on the second half of the program, the audience was ecstatic. Nearly everyone was standing and the cheers did not let up for what felt like five minutes, until Lacombe started to lead the orchestra in an encore: yet more Tchaikovsky—an excerpt from The Nutcracker which the audience seemed to appreciate even more. It was as if I had been transported to the final game of the World Series and the home team had just won.

Now the question is: Do orchestra audiences love Tchaikovsky’s Symphony No. 5 and the The Nutcracker so much because they are the greatest pieces in the repertoire? Or do they love these pieces so much because they’ve heard them so many times before?
Despite my aforementioned admiration for much of Tchaikovsky’s music, I am always suspicious of something that someone describes as “the greatest,” so I’m more inclined to believe the latter. And I see corroborating evidence to support that view in how the general public responds to most things in our society—e.g. the popularity of everything from “oldies” radio stations (which play songs people already have heard a zillion times over and over again) to the success of fast food restaurants all over the world. (There has been a line at every McDonald’s I have walked past on six continents.)

In such an environment, a Temple for the Familiar if you will, new music—by its nature that which we have not before experienced—is doomed to failure, so the fact that Mackey’s piece, as stunning as it is, got any applause at all is a minor miracle. But what can we do to change that? For years I have harbored the belief that there is nothing more exciting than discovering something new, so it has been difficult for me to come to terms with the reality that few people agree with this particular world view. If most people want to relive experiences, whether in order to get a deeper understanding of what they have previously encountered or simply to enjoy a sure thing, then contemporary music needs to be presented differently. I’ve written about this issue many times before, even once in an essay with a name very similar to this one. But this time I’ll go out on a limb and suggest a possible new paradigm.

The new music community needs to make less of an emphasis on premieres and put more energy into making less familiar repertoire (e.g. recent compositions) more familiar by programming the music tons of times. A new piece should get programmed several times during the course of a season, not just one time or for a single consecutive run of performances. A new piece of music played during a season should be rehearsed throughout the season, not just the week before the gig. This, of course, will entail behavioral changes for all parties involved. The orchestra administration will need to re-allocate budgets to ensure there is ample time to do this. Musicians will need to rid themselves of the belief that they can truly do justice to any piece of music that they’ve only read through a few times. Publishers will need to be more flexible with how they rent materials to orchestras. Composers can’t miss deadlines and in fact should be held to tighter deadlines—if a piece being performed during the course of a concert season is not ready before the start of that season, it will have to be bumped to the following season or cut entirely.
Of course, emphasizing the potential familiarity of a new piece over its newness could have drawbacks as well. Perhaps a new piece won’t seem as fresh somehow if it’s done several times over the course of a season. Then again, no one seems to tire of The Nutcracker and everyone seems to have forgotten that once upon a time, it too was brand new. But of course that was back in the days before we had radio or Big Macs.