A Point of Culture

Jim Hall was one of those musicians whose playing changed how American music sounds. His imagination and technical command of the guitar allowed him to rethink and subsequently expand on the traditional approach to the instrument’s fretboard, almost as if he were playing a piano. One could say that Hall was a singular point in the culture of American guitar playing.

If memory serves me right, it was in May or June of 1977 that my girlfriend called to tell me that her father had taken ill, that she was flying from San Francisco to New York City, and that it would make her feel better if I would meet her there. So on a Saturday morning I packed my string bass into a borrowed car and made the 700-mile-long drive from Indianapolis to New York. I’ll always remember surfacing from the depths of the Lincoln Tunnel at midnight and into a virtual sea of humanity along the Dyer Avenue approach to 42nd Street. People were walking, talking, yelling, shopping, and going about their various legitimate and not-so-legitimate businesses as if it was the middle of the day. To someone accustomed to the relative peace and quiet of the post-midnight normalcy of most American cities, the sheer volume of people I saw at that hour was stunning. I found a payphone and called my lady friend, who told me how to negotiate the grid of Manhattan’s roadways to 2nd Avenue and 18th Street where we would meet. About half an hour later I arrived and found her sitting on the front steps of the address where we would be staying for the next week. We hadn’t seen each other for almost a month and were too excited to go to sleep, so we took a drive around town to talk without disturbing our host. We drove east to the FDR Drive and took it south to circle around the island’s lower tip, where we saw the financial district’s colossal skyscrapers contrasting against an expanse of glassy black harbor extending to the Statue of Liberty, a gift to a new nation of guerrilla revolutionaries from a people equated with the very ideal of the American secession from the Crown. We then continued north to Harlem (where one pedestrian looked at the license plate on our car and laughed!) before driving through Central Park and back to our host’s apartment. For the next week, she would visit her father during the day, and at night we looked for movies, restaurants, and music.

The end of this story is already known to those who, for reasons probably best kept to themselves, avidly attend to this blog (or, at least, to those who read my confession from last year). But for those who don’t (or didn’t), I’ll summarize: On the last day we were in New York, we went to a then new and now defunct restaurant, Sweet Basil, for Sunday brunch. The band was playing at a level I would expect to hear at a major music festival and had never before heard coming from an afternoon music-for-dining guitar trio. When the leader of the group revealed himself as Jim Hall (with Michael Moore playing bass and Joe La Barbera on drums), I knew that it was time to get over the claustrophobia I inherited from my parents and take up life as a nematode in the Big Apple because, at the time, New York was probably the only city in the United States where the likes of a force of nature like James Stanley Hall, who passed away on Monday at the age of 83, would be playing brunch in a noisy restaurant.
Of course, I knew about Jim Hall before that day. His recording career stretched back to at least in 1956 when he was working for drummer/composer Chico Hamilton (who also passed away recently) and by the time I had made my decision to take up music as a vocation certain recordings he was featured on—particularly: Undercurrent, Intermodulation (both are duo recordings with pianist Bill Evans from 1961 and 1966, respectively), and, most especially, Live!—were part of my regular study regimen. So, to be clear, I wasn’t surprised at all by what I heard, once I knew who I was hearing. Jim Hall was one of those musicians whose playing changed how American music sounds. His imagination and technical command of the guitar allowed him to rethink and subsequently expand on the traditional approach to the instrument’s fretboard, almost as if he were playing a piano. Like his contemporary, Wes Montgomery, he performed in a variety of settings and genres without losing his individuality, as can be seen here. The list of musicians he worked with is incredibly diverse. Chico Hamilton, Bill Evans, Ornette Coleman, Jimmy Giuffre, Sonny Rollins, Paul Desmond, Ben Webster, Ella Fitzgerald, Gary Burton, Ron Carter, Red Mitchell, Itzhak Perlman, The Kronos Quartet, Michel Petrucciani… the list seems endless. Although his single-note facility was understated, his use of wide intervals, quartal voicings, and chromaticism inspired many of the masters of subsequent generations of influential guitarists, including: Mick Goodrick, John Scoffield, Mike Stern, Pat Methany, Bill Frisell, John Stowell, Emily Remler, Vic Juris, John Abercrombie, Sheryl Bailey, and Bruce Arnold, among many others. One could say that Hall was a singular point in the culture of American guitar playing.

In the years since my Sweet Basil experience, I had the pleasure of meeting and hanging out with Jim Hall a few times, although I never got to play with him. One thing that always impressed me about him was his ability to pick up where he left off. Years could go by, and he seemed to remember where and when we had last seen each other. He was also very supportive of younger musicians and their causes. He was a vital part of ArtistShare collective of artists that host the website where his latest releases are available. I remember a heartfelt duo set he performed with pianist/composer Cynthia Hilts at her 2004 Benefit Concert for Peace at the club where I had first heard him, although the name had been changed to Sweet Rhythm. In 2004 Jim Hall was named a Jazz Master by the National Endowment for the Arts and in 2006 the French Ministry of Culture named him a Knight of the Order of Arts and Letters for his “contributions to musical expression” and “ongoing experimentation.”

It was his lot to be an inspiration to others, as I can attest to from my New York City home. I remember a story about him that circulated around town when he wanted to have an album cover (this was before CDs) illustrated by the cartoonist Gary Larson, the creator of The Far Side. Supposedly, Hall’s agent contacted Larson’s and the request was made. Larson was alleged to have quoted a price of one million dollars for job. Hall’s agent told Larson that, even though he was certainly worth the price, it was a bit hefty for the project, especially considering how recordings by jazz artists were no longer selling like hotcakes. Larson then countered his own offer by suggesting that he would do it for a guitar lesson with Hall. The lesson happened and the two became fast friends. 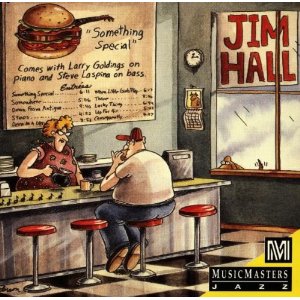 I last saw Hall play with his quartet featuring Greg Osby on alto saxophone, Steve Laspina on bass, and Joey Baron on drums at Birdland last year. It was the same group that had recorded there some two years before and while, like guitar icon Les Paul, Hall’s technique had been hindered by arthritis, his musical sensibilities were intact and the band made great music. And that’s what Hall seemed to always be about: making great music.