In January of 2016, I boarded a plane from my home base in New York City and touched down a few hours later in Winnipeg, Manitoba, Canada. Though I was born in Montreal and lived through its blistering winters for almost three decades, five years of temperate NYC weather had dulled my hibernal instincts: I showed up with a slick coat best suited for a reasonable East Coast urban setting, wearing cowboy boots…

…It was negative 40 degrees. Fahrenheit or Celsius, you ask? Doesn’t matter, they’re the same at that hellish level. (But yeah, Celsius.)

I was there to be announced as the Winnipeg Symphony Orchestra’s new composer-in-residence and co-curator of its Winnipeg New Music Festival (WNMF). It’s fair to say I was pretty stoked. But I didn’t really know what I was getting into.

I’d heard of the orchestra and of the festival. WNMF would come up in conversation among the contemporary music intelligentsia and would show up sporadically in the webosphere. News would filter out about major composers and artists being involved, and the WSO had recently made its Carnegie Hall debut performing exclusively contemporary Canadian music.

The position with the WSO had opened up following the departure of my immediate predecessor, Vincent Ho, and though I’d been garnering some valuable experience writing for orchestra over the previous few years, I didn’t have high expectations when I applied for the post. I was shocked when I got the fateful call, and thrilled that I’d get to go there to experience WNMF 2016 in person before assuming the mantle.

I was expecting something cool but fairly low-key. This isn’t New York or LA, after all; Winnipeg is only the 7th most populous city in Canada (which has one tenth the population of the US). It’s a 22-hour drive from Toronto in the next province over; 13 hours from Chicago or Calgary; and at least 7 hours from “neighboring” cities Minneapolis and Saskatoon.

What I found was fairly mind-blowing. A week-long festival dedicated entirely to contemporary music from Canada and abroad; four full orchestral programs with the WSO and three evenings of chamber, choral, and other programming formats; Joan Tower, David Lang, and Sō Percussion hanging out; collaborations with the visual arts, film, fashion, and gastronomy; enthusiastic audiences coming out to fill the 2300-seat Centennial Concert Hall, seven days in a row. People came not only for the music, but packed the hall’s various spaces to listen to discussion panels and participate in Q&A sessions with the guest artists. With searing −40° weather outside.

The place was buzzing. Wait, am I in New York or LA? [Looks out at the crystalline, frozen landscape surrounding the hall.] Huh. I guess not. 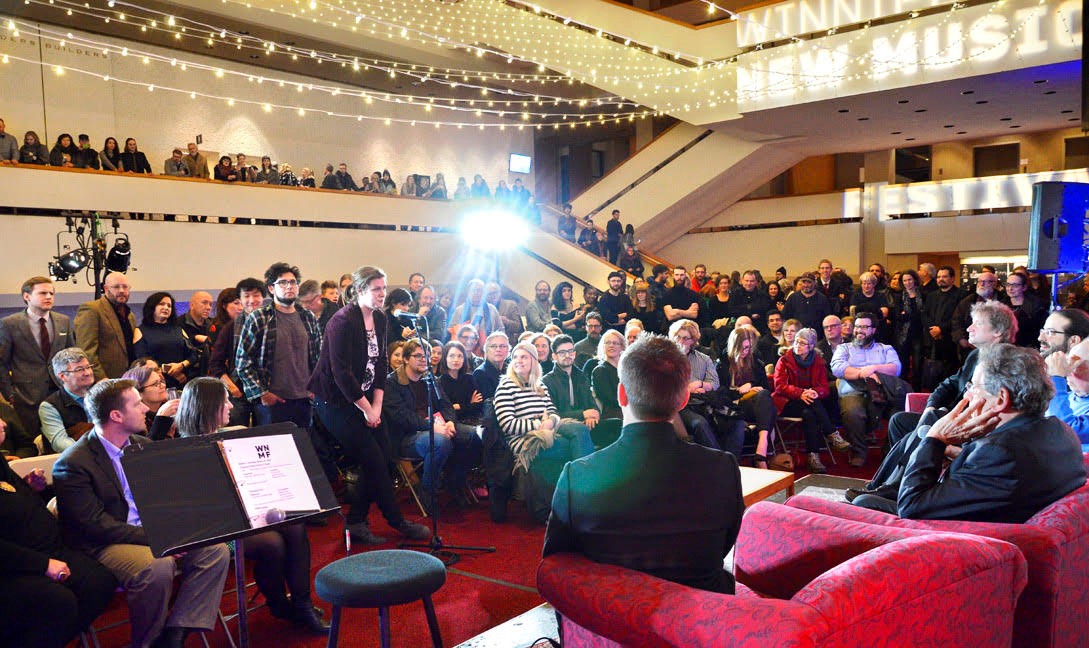 Returning from that first trip, the import of my position hit me. WNMF was founded in 1992 by then-Music Director Bramwell Tovey and the WSO’s first composer-in-residence, Glenn Buhr. The job I was taking on was, incredibly, supported by an initiative by the Canada Council of the Arts to place a Canadian composer at the heart of our important orchestral institutions as ambassadors for music as a living art. Though the details of these positions vary across the nation, the essence is the same: to develop my own skills in composing for orchestra, while advocating for living composers by assisting in contemporary programming, organizing commissions, facilitating rehearsals and productions, writing grants, seeking sponsors, engaging in educational outreach, and serving as liaison between the artists and organization on the one hand, and between the organization and its audience on the other.

If that sounds like a lot of work, that’s because it is. Between all the curatorial, administrative, operational, outreach, and public-facing responsibilities, and composing an inordinate amount of music, it’s more than a full-time job. And it’s an absolute pleasure.

I get to listen to hundreds of pieces every year, including the constant stream of incoming programming and commission proposals from composers, soloists, and ensembles. It can be frustrating, knowing that there’s only so much that can be programmed in even as substantial a festival as WNMF and in the handful of slots dedicated to contemporary music in the WSO’s regular season.

At the same time, we’re also incredibly ambitious, wanting to present and commission a diverse swath of music, from major international figures to local and emerging artists – all within the confines of a rather modest operating budget. The WSO’s commitment to contemporary music continuously boggles my mind, allocating substantial resources to developing the orchestra’s position as a leading supporter of living artists, but financial realities are always sobering. Funding to make it all possible is lovingly assembled from the WSO’s operating budget, from national, provincial, and municipal grants, and from private and corporate sponsorships. This is a Sisyphean endeavor, requiring constant work to maintain and, hopefully, increase our capacity as stewards for contemporary music. 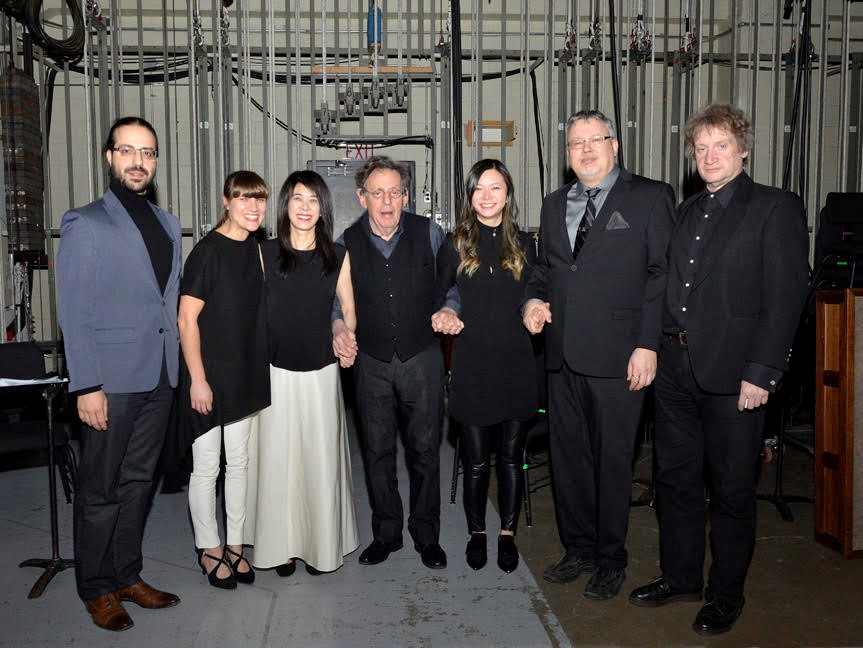 Given all that, it’s amazing what the WSO is able to accomplish. In my first two years with the organization, we’ve featured major international artists of an impressively eclectic range, from Meredith Monk & Vocal Ensemble and JACK Quartet, to Stephen O’Malley of Sunn O))) and William Basinski, to Fazıl Say and Ellen Taaffe Zwilich. At WNMF 2018, Philip Glass was our distinguished guest composer, presenting the Canadian premiere of his Symphony No. 11 and performing in person alongside a murderers’ row of brilliant pianists in an evening dedicated to his complete Piano Études. Partnering with Carnegie Hall for the first time since the WSO’s 2014 New York debut, we co-commissioned Glass’s String Quartet No. 8, which was premiered by guest artists, the JACK Quartet, preceded by Ferneyhough and followed by georg Friedrich Haas’s String Quartet No. 9, performed in complete darkness in the massive concert hall; JACK brought the house down. On opening night, the Glass symphony was programmed alongside the orchestral version of Björk’s Family, an orchestral commission by legendary visual artist Michael Snow, and my second major commission for the WSO, A Parable for End Times, a setting for choir and orchestra of an apocalyptic text of biting social commentary by noted fantasy author Steven Erikson. 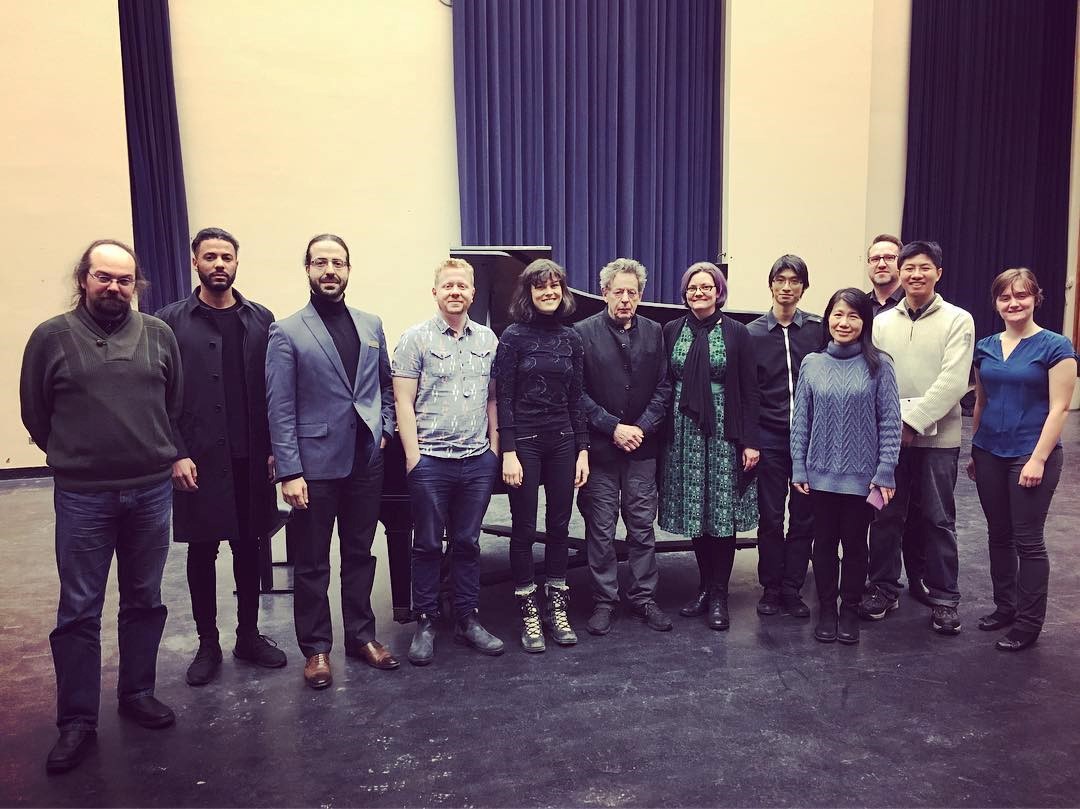 Capitalizing on the potential offered by the festival, in my first year on the job I founded the WNMF Composers Institute, a week-long, intensive professional development program for emerging Canadian composers. Inspired in part by my own formative experience with the American Composers Orchestra’s 2014 Underwood New Music Readings – which was held as part of the first New York Philharmonic Biennial – the Composers Institute runs concurrently with the Winnipeg New Music Festival, offering seven young composers full behind-the-scenes access to the complex machinery of a professional symphony orchestra and major festival, while providing them with invaluable hands-on experience composing for and working with a high-level orchestra. The first edition was so successful that in 2018 the WSO committed to giving not just a reading of the young composers’ works, but to present them in public performance as one of the main WNMF evening concerts. Throughout the week, the dedicated WNMFCI mentor composers and the guest composers who were in attendance for the festival guided the participants through the process, sharing their experience and insight into the practical aspects of both the craft and business of composition. The hope, ultimately, is that this opportunity can serve as a launching point for young composers who are keen to pursue orchestral composition – a tough nut to crack for most of us. The Composers Institute is open to Canadian citizens and residents, with the call for applications going out every year through the usual channels (you may have seen the notice up on the American Composers Forum and Composer’s Site) and on the Composer Institute page. [Do help spread the word if you know any young Canadian composers!]

The amount of work that goes into planning and running a festival of this scope is tremendous. The Winnipeg Symphony’s entire administrative, production, operations, marketing, and artistic planning teams, hall staff, technical personnel, and several dozen musicians are involved in making it all possible. The Composers Institute alone represents a year of preparation and twelve-plus-hour days during the entirety of the festival. From a purely artistic front, witnessing the WSO musicians and conductors prepare a week’s worth of brand new music in a heavily compressed timeframe and execute it at such a consistently high level is frankly awe-inspiring. Most of this work goes on behind the scenes, the names of all the contributors at best acknowledged in fine print in the festival program book or on a back page of the WSO or WNMF websites.

But boy is it ever worth it, if only for the honor of being part of something this special. 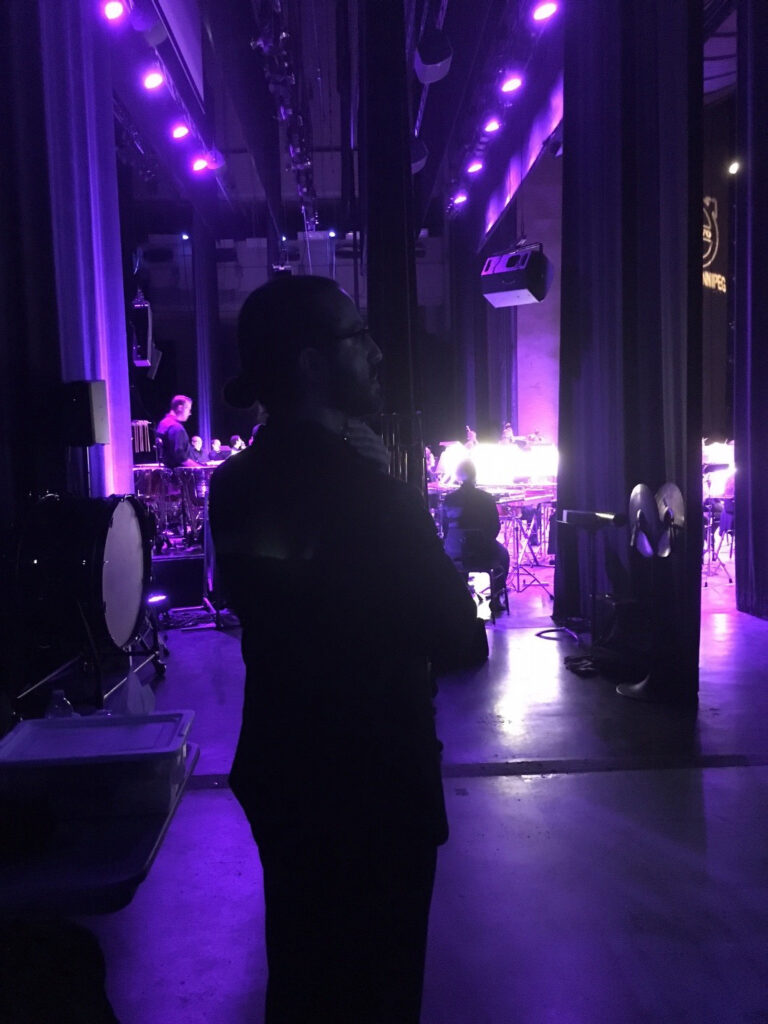 In 2019, WNMF founder and WSO Conductor Laureate Bramwell Tovey returns to conduct the opening concert, featuring WNMF alumni composers Kelly-Marie Murphy, Jocelyn Morlock, and yours truly, capped off with John Adams’s seminal Harmonielehre (which was featured at the very first edition of the festival). Daniel Raiskin then takes over the podium in his first season as WNMF artistic director, conducting works by Anna Thorvaldsdottir, Michael Daugherty, Caroline Shaw, Vivian Fung, and distinguished guest composer Pēteris Vasks. Exciting young Canadian ensembles collectif9 and Architek Percussion come out to present works by Canadian composers, while the incredible Roomful of Teeth makes its WNMF debut both on their own feature concert, and later joining the orchestra for a special collaboration.

And – I still can’t quite believe it – progressive metal pioneers Animals As Leaders come to the festival to give a unique performance of their music, highlighting the progressive metal genre’s shared values as advanced, virtuosic chamber music, and also joining the WSO for the band’s first ever performance with live symphony orchestra. For a life-long metalhead [that’s definitely a word] and classicalhead [can we make that a word?], collaborating with a group of Animals As Leaders’ caliber in creating these new orchestral adaptations of their music has been an incredibly fulfilling experience for me personally – and a testament to the artistic diversity that WNMF has developed in its 28-year history.

Though it may go without saying, I continue to be absolutely stoked and humbled to be part of this institution, and relish the opportunity to return to WNMF every year. In fact, you should consider coming for a visit sometime around January 25–February 1, 2019; when was the last time you were in the Canadian Prairies in the heart of winter? Besides, it’ll only be around −40°.