The love that a student has for her teacher is a special one. I miss you like crazy. I still hear your words of counsel from our music lessons of old. I remember your distinctive walk, frail and steely both, across worn carpet to the treble-bright piano in your studio, thick music score in hand. When I was over early at the house, you and beautiful Anita would fry up corn pancakes while discussing a marvelous new clarinetist who bled “for his composer and played like it was his last breath!” 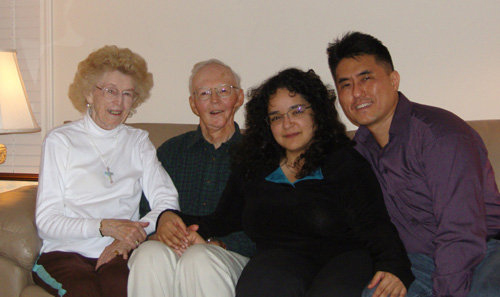 My dearest mentor, my teacher, my role model, my Leslie:

I miss you like crazy. It’s been a few years since we last talked, a total insanity considering how often in my daily life, I still hear your words of counsel from our music lessons of old. I can see the way your hands used to hold your knees when you laughed while seated, head back and eyes closing in mirth at some bit of mischief I would jaw off, nervous and eager to amuse. I remember your distinctive walk, frail and steely both, across worn carpet to the treble-bright piano in your studio, thick music score in hand. When I was over early at the house, you and beautiful Anita would fry up corn pancakes while discussing a marvelous new clarinetist who bled “for his composer and played like it was his last breath!” These days, when I hear the clarinet, I swear, in a fit of quasi-synesthesia, that I’m tasting corn…

The love that a student has for her teacher is a special one. I was not a child when, in the ’90s, you stepped out of retirement for a brief stint to become a mentor for a few lucky students at the University of Michigan in Ann Arbor. In fact, I was already experienced and cognizant of the usefulness of having someone to idealize and be guided by, especially a composer so widely revered and respected. I even expected it. What I hadn’t expected was to be consistently wowed—humbled really—by your humanity. Honestly, I can’t imagine the wellspring of personal experience and patience you reached into when assessing the counterpoint and orchestration of my well-meaning but so very naïve scores, those earliest attempts to tease out a voice as a Peruvian-American with Chinese and Lithuanian Jewish forbearers, as a woman with hippy-feminist roots, and even as a disabled individual. Although you were from a certain era of “old school” American men that might not have been surrounded by the most diverse peers, you easily talked with me about the most volatile of subjects affecting me deeply as a young composer: Racism and “playing the race card,” cultural tributes vs. cultural parasitism, ambition in one’s career and ambition in one’s personal artistry, sexism, and the distracting, god-awful noisy politicization of it all. I was well aware of taking up the time of a man who had been a young soldier in one of the world’s ugliest wars, who later experienced what no parent ever should in losing a young child, and whose own face was startlingly altered after fighting serious illness. You still believed in teaching and writing great music, and that made me even more devoted.

Knowing well how your eyes shone to work with performers who played from the gut, leaving it all out on the stage, I remember putting my fingers to work in the only meaningful gesture I could think of to properly thank you when I left school: recording your complete piano and piano/violin works on a CD. It was a Frank family affair with my sweet mom, the stained glass artist, designing a cover to your specs and with my father, the Mark Twain scholar, editing the booklet texts. (I couldn’t figure out a role for my scientist brother.) In the recording sessions, I threw myself into the heady mix of tonality and atonality that was your hallmark, wrestling with the terse lines that needed to suddenly sprawl, or pulling symphonic colors out of the Steinway borrowed from the Detroit Symphony. Definitely, for a brief time, I caught the bug that unjaded new music performers have: Wanting an esteemed composer’s approval so bad, it’s like needing benediction from the pope.

You taught even when you didn’t mean to. Introducing me to the joys of Wallace and Gromit? Priceless. Gamely working a tough piece of jerky I offered when I forgot that chewing was difficult, an embarrassing faux pas? Likewise priceless. Playing hopeful yet gentlemanly matchmaker between me and a platonic male composer friend, declaring others to be “boobs?” So, so, so very priceless.

If I had stayed in better touch these past few years, I would have been able to tell you that said platonic male composer friend and I are still dear to one another while both happily married to others. I would be able to tell you that my career landed fine, and I think it will continue on all right. I would tell you that I absolutely did kick to the curb my illness and its ensuing “wellness” regime of surgeries and radiation. I would tell you about playing your Preludes piano suite in a men’s prison and them loving its craggy unyielding modernity; that, as you advised, I have a tough skin against bad/ignorant reviews but a necessary skeptical eye towards the good; and that I’ve bought land to raise Peruvian alpacas not far from where you grew up in the San Joaquin Valley, son of a pig farmer. I would tell you that having lived into my middle years now, I appreciate better how steadfastly you held onto your values as artist, teacher, colleague, father, and husband: Simply put, a man of integrity and honor. Most of all, I would tell you that I it pains me that performances of your beautiful music had slowed in recent times—an injustice—but that I would, nudged once again into action by your leaving us, do what I could to remind the world of your musical legacy.

You knew me as an atheist, more by circumstance than intentional design, but I confess that there is the rare occasion that someone gives me pause. I feel their incandescence, and I’m at a loss to explain their excellence in ordinary terms.

Rest in peace, my teacher, Leslie dear. I will always be missing you tons. 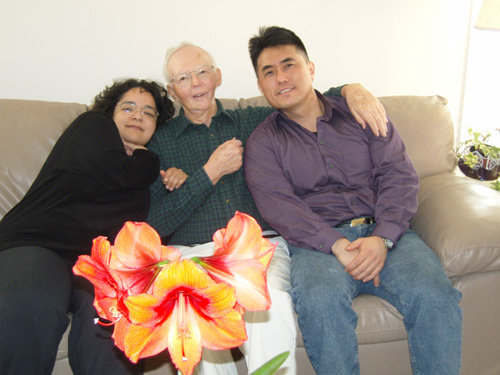