Most NewMusicBox readers probably already know a few things about Vivian Perlis. She founded Yale’s Oral History of American Music (OHAM) after interviewing dozens of people who knew and worked with Charles Ives. Using those interviews, she wrote the award-winning book, Charles Ives Remembered: An Oral History. She later conducted interviews with some of America’s most prominent composers, including extensive work with Aaron Copland. Their interviews became the basis for his autobiography, which Vivian co-authored. She co-produced documentaries about John Cage, Eubie Blake, Copland, and Ives. Musicologists Carol Oja and Judith Tick commented that Perlis was “an intrepid chronicler of the American musical experience and has done so by honoring the voices of those whose story she tells. She has accomplished this as an amiable powerhouse, fusing the roles of scholar, archivist, administrator, fundraiser, film-maker, and writer—not to mention wife, mother, and professional harpist. In the process, she established Oral History of American Music . . . forging a hybrid field and an equally visionary and distinctive professional identity.”

Here, perhaps, are a few things you might not know about Vivian Perlis:

Her career in oral history almost ended before it began.

Vivian was in a serious car accident as a young child. She sustained injuries to her face that required multiple surgeries. Her mother was concerned these injuries might prevent young Vivian from speaking properly. It’s emblematic of Vivian’s determination that she not only spoke, but made a career out of having conversations – and that these recorded conversations contributed mightily to American music history.

She grew up with a Theremin in the house.

Vivian’s father had a wide range of interests and accomplishments. He ran his own company, the Applicator Brush Company and was an inventor who owned a patent related to artist brushes. He played a number of instruments. He made delightful sculptures out of matchsticks. And he became a master of origami. Well before science fiction movies brought the theremin to popular attention, her dad brought one home for the family to play.

She was a master of disguise.

Vivian, a glamorous woman with a keen sense of style, recognized she needed to tone it down.

Her first interviewees for the Ives Project were some aged, conservative people in Danbury, Connecticut. Vivian, a glamorous woman with a keen sense of style, recognized she needed to tone it down with these Yankees. She wore white gloves and no makeup, and she forced herself to drink tea rather than her preferred coffee.

She played a gig with Cat Mother & the All Night Newsboys at the Electric Circus in the East Village around 1971.

Vivian was an accomplished harpist who played with the New Haven Symphony. When the country rock band Cat Mother & the All Night Newsboys needed a harp for one of their pieces, Vivian got the gig. She performed at the legendary hippie haven, Electric Circus, wearing an outlandish mini dress and a flowing hair piece. She probably left her white gloves in Danbury with the Ives interviewees!

She met Mel Brooks, who had a big crush on her.

Vivian would regale us with the tale of meeting Mel Brooks when she was in Los Angeles. Apparently, they hit it off. Surely Mel recognized Vivian’s ready sense of humor. She mentioned that Mel would call every so often, and if her husband, Sandy, answered, he’d berate Sandy for staying married to Vivian when she was indeed Mel’s true love. It seemed all in good fun. Anyway, Mel Brooks didn’t stand a chance. Vivian and Sandy were a dazzling couple. By all accounts, these two very good-looking, intelligent, and cultured people shared a story-book romance and marriage.

She foraged for mushrooms with John Cage.

Cage was one of Vivian’s favorite composers.

Cage was one of Vivian’s favorite composers. She befriended him and documented his work at a time when it was more often embraced by artists and choreographers than by musicians. While making the engaging documentary, I Have Nothing to Say and I am Saying It, Vivian traveled to France where she filmed Cage’s hunt for mushrooms. She described in mouth-watering detail the gourmet meal they shared after presenting Cage’s bounty to the local chef in Fountainbleu.

She managed OHAM with kindness and compassion.

We hired a young mother to work at OHAM. One afternoon, she sat down on the office couch and fell deeply asleep. I surreptitiously nudged her, trying to coax her awake before Vivian, the boss, discovered her slumbering employee. Before I succeeded, Vivian noticed, and said, “Poor thing. She’s got three young kids at home. She must be tired. Let her sleep.”

Another person was hired for a job requiring a great deal of flexibility and multi-tasking. It quickly became apparent that this person was not at all suited to such work. Vivian found a way to restructure everyone’s assignments and to find a job that was perfectly suited to this employee’s skills and temperament. Would this be the approach to management taught at business school? I don’t know, but I do know that it inspired fierce loyalty and a highly productive work force.

She was a voracious reader.

Vivian was a fast and voracious reader. One of the last books she read was John Harbison’s What Do We Make of Bach? It sat on her bedside next to The Daily Zen Journal, a book written by her grandson, Charlie Ambler. And it was near Richard Powers’s The Overstory, a great yet demanding book she purchased when well into her final illness. Powers’s moving and ambitious work, The Time of Our Singing, was one of Vivian’s favorite novels.

She envisioned herself in service to the composers she interviewed.

An example of this would be her extensive work with Aaron Copland, a gay man born in 1900 who had been persecuted by Joseph McCarthy. Understandably, Copland refrained from discussing his sexual orientation in the interviews. It would have been unthinkable and somewhat tawdry for someone in his position to discuss this matter publicly at that time. The Copland/Perlis autobiography, which was based on these interviews, was later criticized for this omission — an easy judgment to make decades after the interviews, when societal norms and gay pride had changed the way the world viewed homosexuality. Vivian was aware of Copland’s homosexuality, but she made the hard choice to refrain from this subject and stood by her decision to serve the composer’s wishes.

She was open to new adventures.

At an age when many are contemplating a quiet retirement in Florida, Vivian joined her longtime friend, Wes York, and his husband, Bob Scrofani, in traveling far and wide to music festivals, art galleries, botanical gardens, and parties. I joined them for a meal before a Composer’s Portrait concert at Miller Theater. The fabulous food, fine wine, and animated conversation inspired my exclamation, “This is such convivial company!” Without missing a beat, Bob replied, “That’s because we’re the ConVivians!”

She recognized the magic around her.

Vivian savored experiences, had a great appetite for enjoyment, and saw the magic around her.

She returned from a concert and gushed about the marvels of this particular performance: “Such artistry! Such thrilling and innovative compositions! An unforgettable evening!” A colleague later mentioned that he went to the same concert, and it was only okay. I always felt that these alternate realities revealed a lot about each person. Vivian had a zest for life and a lively imagination. She savored experiences, had a great appetite for enjoyment, and saw the magic around her. Wouldn’t we all prefer to go through life that way? Those who were privileged to know her or to read her scholarly work and insightful interviews continue to benefit from her embrace of joy, culture, and good living. 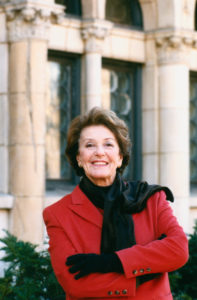