With the release of their debut CD sweet light crude, David T. Little’s chamber rock project Newspeak has arrived in a big way. 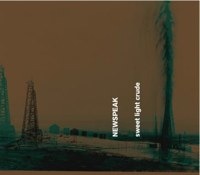 It’s been a long time coming for composer/performer David T. Little’s chamber rock project Newspeak, but with the release of their debut CD sweet light crude, the group has arrived in a big way. The band that started as a improvisational trio while Little was a student at the University of Michigan has matured into a formidable octet, not afraid to explore the possibilities and push past the boundaries of the zeitgeist’s brave new sonic world.

The idea for Newspeak came to Little in the fall of 2001 while he was reading George Orwell’s book of the same name. And after the World Trade Center fell, viewing the events that unfolded and the country’s newly minted Global War on Terror through Orwell’s dystopian lens forged the political underpinnings to much of the group’s work. However, whereas Orwell’s concept is designed to limit free thought, creating the circumstances in which all other modes of thought are impossible, Newspeak the ensemble performs music by composers who think freely about the intersection of music and politics, and challenge preconceived notions of aesthetic boundaries.

It should come as no surprise that the album’s standout track is one penned by Little himself. Sweet light crude, Little’s love song to oil, stands as a perfect encapsulation of Newspeak’s abilities and capabilities. Reminiscent of vintage quasi-epic Metallica tracks like “For Whom the Bell Tolls” (Ride the Lightning) and “One” (…And Justice for All), sweet light crude manages to rock hard without ever sounding self-conscious or contrived, an all-too-familiar pitfall of cross-genre experiments like this one. In Little’s hands, even a clarinet doesn’t sound out of place with a distorted guitar and cymbal-heavy metal drumming. In fact, the most gripping moment on the entire album comes with the clash between the outstanding vocalist Mellissa Hughes and Eileen Mack’s searing clarinet after a build-up to the track’s powerful coda (that’s at 6:37, if you’re following along). Hughes’ flexibility is worth noting. At times she conjures early 1990s Dream Theater vocalist James LaBrie while elsewhere she sounds slightly Björkian.

Also holding down the hard-rocking side of Newspeak’s modus operandi is Oscar Bettison’s B&E (with aggravated assault). Bettison’s rapid meter changes and abrupt stylistic shifts, executed with perfection by the group, serve as an ode to progressive rock with a little more than a dash of the frenetic energy and abandon of Mick Barr’s Crom-Tech.

Lest Newspeak seem like a one-trick new music pony, the group also lends its considerable flexibility to two tracks that explore a more electronica-type feel. Stefan Weisman’s trancey, hypnotic, downtempo I Would Prefer Not To, shows that Newspeak is not just all about rocking out. And Missy Mazzoli’s In Spite of All This will be recognized as vintage Mazzoli melancholy, complete with the fleeting emotional swells and sense of yearning that has become a hallmark of her writing.

It’s a tough proposition to unselfconsciously combine musical styles as seemingly disparate as contemporary classical music, progressive rock, heavy metal, and electronica, but on sweet light crude Newspeak makes it sound effortless and completely devoid of the awkwardness one hears much too often in these attempts at cross-genre pollination.