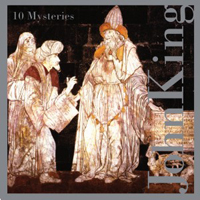 Chance and improvisation are the primary forces driving composer/violist/guitarist John King’s 3rd CD of riveting, inventive string quartets. Performed by his quartet, Crucible, comprised of King on viola, Cornelius Dufallo and Mark Feldman on violin, and Alex Waterman on cello, the three works on this disc employ what King refers to as “trilogic unity,” in which “predetermined (composed), spontaneous (improvised) and indeterminate (randomized) music… are incorporated into the work equally.” The result is a set of compositions that are all very different from one another, and that share a surprisingly organic sense of flow and structure.

The first work, 10 Mysteries gets the job done in nine movements, each evoking a unique musical landscape from scampering lines and knotty, snarled textures to long drones and bursts of looping rhythms. The fifth movement jumps out by serving as a respite from the constant activity by capitalizing on a relatively slow chorale of smooth chords played without a trace of vibrato. Gentle and also slightly unsettling.

According to this interview there is indeed a 10th movement, made up of the silences between the end of each movement and the beginning of the next—the space in which to revel in what one just heard, and in the mystery of what will follow.

Rivers of Fire for string quartet and electronics, the longest work included on this disc, is an intense journey in which quartet and electronics move in parallel motion, occasionally crossing paths. This composition makes the most use of steady rhythmic pulse and consistent harmonic and melodic material of all the pieces, even engaging here and there in catchy, singsong melodies that eventually dissolve into thick layers of tremolos. Traces of the bluesy sound that characterizes some of King’s earlier quartets also seem to color the work.

Presenting two versions of Winds of Blood for string quartet and electronics is an excellent idea, in that it demonstrates how each execution of a chance operation process can produce substantially different performances. Particularly notable is the role of the electronics in the two works—although in both cases the live electronics move independently from the quartet, they are fairly subtle in version one, while they take on a principle role in the second. In both Winds of Blood and Rivers of Fire the electronics so beautifully and seamlessly manipulate the sounds of the acoustic strings that the results almost escape notice. In each piece the electronic sounds are very much a natural part of the musical landscape.

The Crucible quartet delivers clean, virtuosic performances, full of intensity and always with a sense of purpose and motion. Each player has a clear talent for extended string techniques and improvisation, not to mention the ability—and the flexibility—to integrate the two into whatever musical environment the moment calls for.