The National Endowment for the Arts has announced the 2017 NEA Jazz Masters Fellows, which is the United States government’s highest honor in jazz.

The National Endowment for the Arts has announced the 2017 NEA Jazz Masters Fellows, which is the United States government’s highest honor in jazz. Five individuals (four musicians and one advocate)—vocalist Dee Dee Bridgewater, composer/pianist Dick Hyman, composer/bassist Dave Holland, composer/organist Dr. Lonnie Smith, and jazz historian Ira Gitler—will be recognized for their lifetime achievements and exceptional contributions to the advancement of jazz. Each will receive a $25,000 award and be honored at a tribute concert on Monday, April 3, 2017, produced in collaboration with the Kennedy Center, which will be free and open to the public and also available through a live web stream.

NEA Chairman Jane Chu said, “For 35 years, the National Endowment for the Arts has celebrated jazz, one of our nation’s most important cultural contributions, by honoring those who have dedicated their lives to this music. I am pleased to welcome these five individuals with their artistry, energy, and commitment to jazz to the NEA Jazz Masters family.” 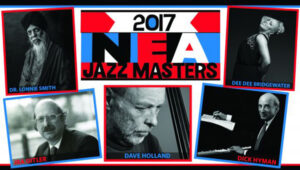 Bridgewater is a daring performer of great depth whose singing talents have earned her both a Tony and multiple Grammy Awards. In addition, her commanding personality made her a natural for hosting the award-winning National Public Radio syndicated radio show JazzSet with Dee Dee Bridgewater from 2001 to 2014.

Holland is one of the most versatile bassists in jazz, working across different styles seamlessly, from traditional to avant-garde jazz to world and folk music. He is also an accomplished composer and bandleader, bringing together musicians of exceptional talent to perform his intricate compositions. In a career spanning five decades, he has continued to evolve musically with each new project while honing his instantly identifiable sound.

Hyman is a piano virtuoso who has been known for playing in any style he wants. A masterful improviser, he is also a composer of concertos and chamber music, and the soundtrack composer/arranger for more than a dozen Woody Allen films. In addition, he launched the acclaimed Jazz in July series at the 92nd Street Y in New York City and served as its artistic director for 20 years.

Smith is a master Hammond B3 jazz organist and composer who, in a career spanning more than 50 years, has been featured on more than 70 jazz, blues, and rhythm-and-blues recordings. He is considered one of the premier purveyors of funk/soul jazz.

Gitler is an American jazz historian, journalist, educator, and author who has written several books about jazz and hundreds of liner notes for jazz recordings. He has also written for many jazz publications, and served as associate editor of Downbeat during the 1960s. In the 1980s and ’90s he produced concerts for George Wein’s New York jazz festivals. Gitler also taught jazz history at several colleges and is considered one of the great historians and champions of the music.

Each year since 1982, the National Endowment for the Arts has conferred the NEA Jazz Masters award. With this new class, the NEA has awarded 145 fellowships to great figures in jazz. NEA Jazz Master Fellowships are bestowed on living individuals on the basis of nominations from the public including the jazz community. The NEA encourages nominations of a broad range of men and women who have been significant to the field of jazz, through vocals, instrumental performance, creative leadership, and education. The annual award for a non-performing jazz advocate, bestowed upon an individual who has contributed significantly to the appreciation, knowledge, and advancement of the art form of jazz, is named in honor of poet, music critic and historian A.B. Spellman who served as an NEA Administrator from 1975 to 2005. The NEA also supports the Smithsonian Jazz Oral History Program, an effort to document the lives and careers of NEA Jazz Masters. In addition to transcriptions of the comprehensive interviews, the website also includes audio clips with interview excerpts. This project has transcribed the oral histories of more than 90 NEA Jazz Masters. The NEA is currently accepting nominations for the 2018 NEA Jazz Masters (deadline: December 31, 2016). Visit arts.gov/honors/jazz for more information and to submit a nomination.