The hall was full, energetic, anxious for the Future Classics concert, the culmination of the Minnesota Orchestra Composer Institute. But one must ask the question. If the appetite for new music is so huge here, why aren’t more American orchestras doing this? 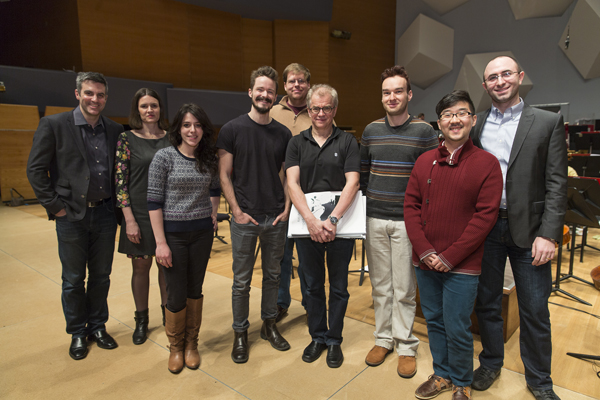 The composer as rugged individualist. Sink or swim. Every man (or woman) for himself.

The composer as Elon Musk, as Steve Jobs, as Walt Disney, as both publisher and publicist, as public as possible.

The composer as creator, editor, engraver, buyer, seller, middle-man, and perhaps above all artist and inventor but also protector of copyrights, of rights both grand and small.

And there was of course the man most independent, most individual and inscrutable of all, Osmo Vänskä, who, by now, everyone knows rides a Yamaha and comes from that dark, bubbling cauldron of conducting talent that is Finland—the man, who, when asked whether Matthew Peterson’s soaring Hyperborea evoked Nordic emotions answered with: “I think you know, I’ve had seven pieces to prepare.”[1] 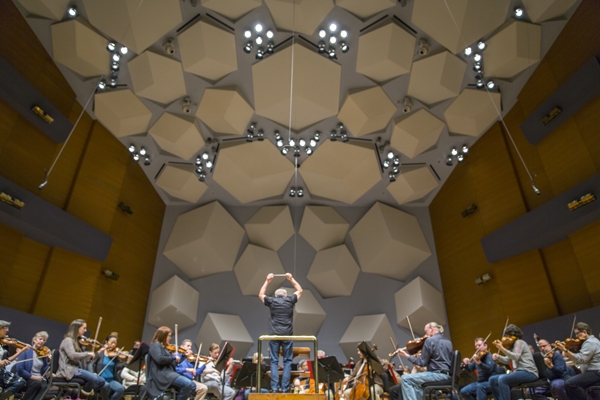 Those seven new pieces, most seeing their professional orchestra premiere, were more than simply prepared. While orchestra members began learning their parts not simply days or weeks in advance but some two months ago, Osmo touched down in Minneapolis Wednesday night and arrived at an uncharacteristic 9:03am the following morning for what I jokingly labeled to a Star Tribune reporter as “The Judgment of Caesar.” But there was no judgment. These were one-on-one meetings with one of the world’s great conductors, at the helm of one of the world’s great orchestras. Those seven new pieces and their seven new scores, carefully marked up in pencil from top to bottom, were about to be rehearsed—truly rehearsed, not simply read. This is why the best way to introduce this year’s Minnesota Orchestra Composer Institute—a week-long program held at the coldest possible time of the year in a city whose commitment to music, old and new, quite profoundly reverberates all around the world—is to start at the end: the concert itself.

Orchestra Hall was full, energetic, anxious, as NPR’s Fred Child introduced composer after composer, piece after piece, proverbially twisting the key into the mind and heart of each composer until we felt, if not entirely like our own publicists, then, at least, surprised at our own ability to communicate without having to write any notes down. The topic of communication through the Institute was, if not often directly referenced, undoubtedly the dominant theme: communication to musicians through parts, to conductors and artistic directors via email and phone (though never by phone to Asadour Santourian, by his own request!), to audiences by public speaking—ultimately, to ourselves by how receptive we were to such a barrage of well-meaning information and advice. On Friday night, there was just the music, a seven-composer feast (this was no tasting menu but a concert of fully fleshed out orchestral works) spanning essentially every aesthetic, style, and medium imaginable.

Living mostly in Europe these days and having to play the role of explaining just what is going on in contemporary American music to my composer colleagues there, I’ve run up against the opinion that seemingly everything is probably minimalist and if not, it’s loud and ambiguously tonal with orchestral tutti upon orchestral tutti, European orchestral music is taut, lean, precise, sophisticated, timbral, and we can go on. That kind of conversation isn’t just held on this side of the Atlantic. I have a great composer friend who is convinced that no European orchestra would be interested in his music because of how “American” it sounds. Well, wouldn’t the Composer Institute’s final concert, christened “Future Classics,” be the perfect place to find out what American music ultimately does sound like?

Inconclusive. Diverse, aesthetically all-encompassing. And without wanting to ascribe greatness to my own work or anyone else’s, I will just quote composer Kevin Puts, who has taken on the artistic leadership role of the program: “Wow!” I think that single word encapsulated how we all felt about it, we meaning that holy trinity of audience, performers, and conductor. We were all wowed by the challenge of the music (in many cases, a challenge not entirely necessary), the dedication of Osmo and the orchestra, the support from Orchestra staff and Kevin Puts, our own camaraderie, and most of all, that we got to finally hear this music done at the highest level it possibly could be done. Music, itself, that aspires to exist on the highest level as well.

What is the Composer Institute and why does it even exist? Whither the appetite for new music?

Ours was the twelfth iteration of what cannot surely be called an orchestral reading session, nor a commission of any form, nor a purely educational program as it is, in the end, all about having the music performed on the grand stage. The Institute assumes certain things that composers might not be used to, namely that by writing a lot of notes, performers might actually learn all of them even if it takes practicing through their vacation. Or that the best way to get a publishing deal is to have one already. Well perhaps we already knew the latter.

Orchestra members, arts administrators, publishers, lawyers, even a certain NY-based NewMusicBox composer advocate, offered their insight, wisdom, complemented by a steady (but generally well-deserved) airing of grievances. The message was uniform: you’ve done well to get here. But your career is in your hands, and no one’s else’s. Rugged individualism. Sink or swim. Et alii. 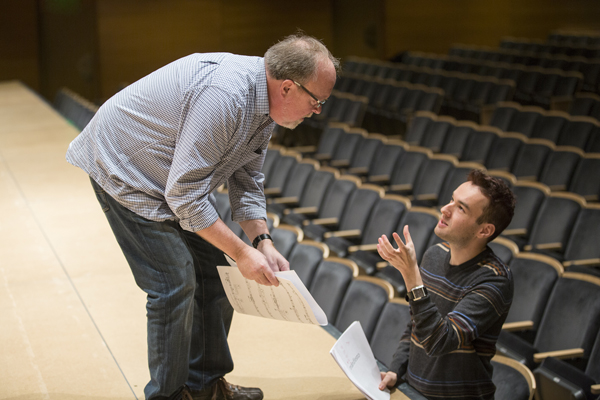 But no matter the entrepreneurial route, the audience in Minneapolis on Friday the 16th was hungry for new music. During the post-concert Q&A session, an audience member exclaimed that this is her favorite concert of the year. Many others voiced their allegiance to the same. These people were not forced to be there. They weren’t bussed in. There’s no university. They came because they love their conductor, they love their orchestra, and they realize that for classical music to thrive, it has to keep being made.

We, seven—alphabetically (and in concert order) Kati Agócs, myself, Texu Kim, Loren Loiacono, Evan Meier, Matthew Peterson, and Michael Schachter—wrote the music. But it was made by Osmo, the orchestra, and the people without whom the Institute simply wouldn’t exist or function, like Mele Willis and Kevin Puts. And most of all, the likely thousand-strong audience who clapped and cheered no matter whether it was the microtonally inflected alto flute solo in my own Manifesto, a piercing oboe mulitiphonic in Texu Kim’s resplendent Splash!! [2], the simultaneous musical references to Stravinsky and Wagner in Michael Schachter’s clever Freylekhe Tanzen, Loren Loaicono’s dizzying vibraphone cross rhythms in Stalks, Hounds, Kati Agócs’s hypnotic electric solo sextet writing in Perpetual Summer, or the expansive, searing beauty of the climax of Evan Meier’s Fire Music.

One must ask the question why, if the appetite for new music is so huge in Orchestra Hall, more American orchestras don’t do it this way? Does the Orchestra Institute have to be unique? Surely, if the American Composer Forum’s suggestion that there are 10,000 composers living in New York City alone is reality, there are more orchestral masterpieces from young composers waiting to be uncovered. What if the Los Angeles Philharmonic, the San Francisco and Atlanta Symphonies, the Cleveland Orchestra and all the rest set up their own Institutes? What would the course of American classical music be then? And why hasn’t it happened?

There are no easy answers to those questions, I’m afraid. But I might return to that notion of rugged individualism, of entrepreneurship—now, no longer in the realm of composers. It took those qualities in Aaron Jay Kernis, in Osmo Vänskä, in others around them to create what Minnesota created, and now for Kevin Puts to lead it into the future. It took vision and a belief that young composers like us deserve a shot now rather than later, rather than never. May that vision spread. 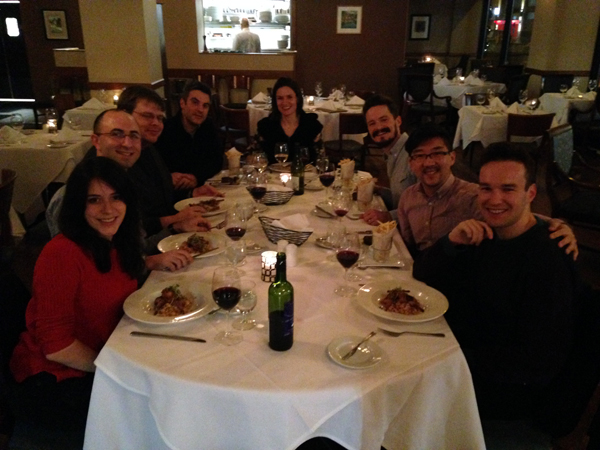 1. Even in a masterpiece, there is some room for improvement–or so we found out during rehearsals. I asked each of my colleagues to submit a page that either didn’t go as planned, or did but elicited some meaningful gripes in the process. (Click on any of the seven score images below in order to enlarge them.) Michael Schachter’s opening page asks for horns placed in the audience. “They didn’t quite get the hang of the sound I was after,” he says, despite the effect working out marvelously during the performance. Matthew Peterson’s excerpt asked for a tempo so slow, it was off the metronome. “Despite the music being really easy here, Maestro really didn’t want to do it in q = 32!” The page from my piece, Manifesto, elicited the most consternation for asking way too much in too short of a period of time. But it, like everything else, proved no obstacle to the Minnesota Orchestra. They played it all perfectly.–EB

2. During his interview with Texu Kim before the performance of his piece, Fred Child asked Texu why it had two and not one or three exclamation points and Texu responded that it was too lonely with one. 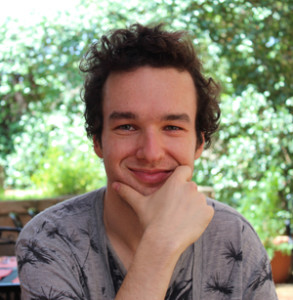 With performances across the United States, Europe, Asia, and South America by leading orchestras, choirs, and soloists, Eugene Birman (b. 1987 in Daugavpils, Latvia) is a composer of music of “high drama” and “intense emotion” (BBC). His highly public career (appearances on CNN, BBC World TV, Bloomberg, Radio France, and more) has seen premieres and commissions from the London Philharmonic, Minnesota Orchestra, BBC Singers, and countless others. Eugene’s music can be found on commercial releases with Naxos, Abeille Musique, and on NMC Records’ 25th anniversary disc “Next Wave”. He is currently based between San Francisco, CA, London, UK, and Tallinn, Estonia.