There were so many new and shiny ways to share our inner monologue in 2007. In honor the information acceleration that marked the year, let’s take a deeper look at just a few mile markers.

What big ideas will you bring to “The Box” over the next 15 years? NewMusicBox thrives because of your support. When you donate, you join many individuals who are committed to the future of composition, improvisation, and conversation about new American music and its creators. Join them and be heard.

In 2007, Apple released the iPhone. Though not the first smartphone in the marketplace, it amplified the radical shift in how many Americans—at least those in certain economic brackets and data service areas—were communicating with one another. Our connection to one another was now so portable, it was effectively a 24/7 lifestyle accessory (or a punishing ankle monitor, depending on your perspective). Yet for all that potential interactivity perhaps no relationship was as strong as the one we each had with the phone itself, and with our own image glimpsed in its finger-smudged glass. Though #selfie was still on its rise to buzzword status, it was a reflective time.

Alongside this product development, there were new and shiny ways to share our inner monologue. Twitter had launched in 2006, but the popularity of sending out 140-character missives really began to build in 2007. So many thoughts, so little time to process them. In honor the information acceleration that marked the year, let’s take a deeper look at just a few mile markers. 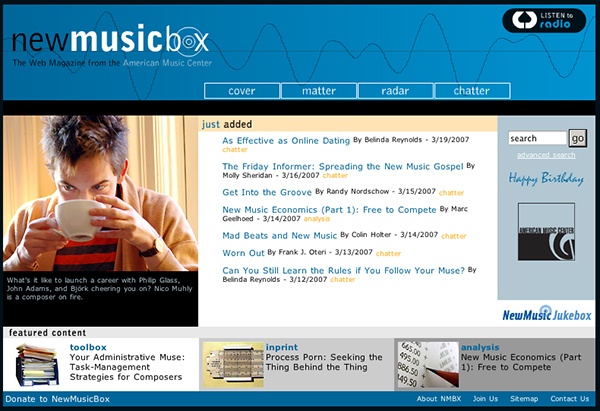 1. Alex Ross’s The Rest Is Noise: Listening to the 20th Century pushed contemporary classical music into mainstream consciousness, picking up a 2007 National Book Critics Circle Award for Criticism, a New York Times Book Review Top Ten Book of the Year nod, and a spot on Time magazine’s Top Ten Nonfiction Book of 2007 in the process. Ross stopped by our office to chat about the book and let us in on some of the tidbits that ended up on the cutting room floor.

2. Our own Counterstream Radio launched on March 16 with an inaugural program featuring an illuminating conversation between Meredith Monk and Björk, two artists who had long admired each other’s music but had never previously met. The station has been broadcasting a deep catalog of music to an ever-growing audience of music fans ever since.

3. As the water rose on a global financial crisis and the wreckage of a burst housing bubble began floating our way, the economic challenges facing new music were, as per usual, ongoing. We focused in on some big issues: What is the industry cost of a free concert? Will the cost disease of live performance eventually kill it off? With budgets tightening, why rent new music when you can play the old stuff much more cheaply? This might sound like a fairly depressing read, and indeed the discussion does place some hard questions on the table, but the takeaway wasn’t so dark. As Matthew Guerrieri pointed out, “The fact that live performance persists in the face of market pressures speaks to a basic human need that even Adam Smith’s invisible hand can’t slap away.”


4. Our interviews often take “in-depth” to new levels, and in 2007 we dove into the catalogs and personal histories of a number of remarkable people. Wendy Carlos let us into her world for a lengthy and extremely moving conversation about her work, and it remains one of our most popular talks. We did our best to keep pace with the rapid-fire ideas of a then-25-year-old Nico Muhly (and the coffee and conversation kept flowing right through the photo shoot). A few months later, we sat down with Charles Wuorinen and were impressed by the passion and conviction that backed his arguments. Muhly was as well and posted about it. (Things got very meta.) Jennifer Higdon impressed us with her egoless, laid-back practicality, and Ornette Coleman kinda blew our minds with his poetic ideas (not to mention conversation style) as he discussed life, death, and music.

5. The 2007 Tanglewood Festival of Contemporary Music focused on a group of American composers born in 1938 (more or less). In a three-part series (1, 2, 3), Judith Tick walked us through the ties that bind this unique cohort of artists together
Whew, talk about deep thoughts! In between these expansive intellectual excursions, however, we encouraged everyone to remember take care of themselves. Music making is challenging enough without it becoming physically painful. Doping allegations were a dark shadow looming over the athletic world, after all, and it would be a terrible thing if the headlines turned our way next.