If 2004 had a genre-busting vibe, by 2005 we were embracing friends old and new as barriers cleared. The questions at the intersection of music and digital delivery, however, were getting much more complex as the novelty of what we could do careened into what music was worth and how we were going to pay for it.

Welcome to day eight of our celebration of [email protected] If everyone who regularly reads NewMusicBox donated just $1 per month we could end this campaign today. Help support the future of in-depth new music journalism by donating today!

If 2004 had a genre-busting vibe, by 2005 we were embracing friends old and new as barriers cleared. And we worked on our relationships: with our colleagues, with our kids. The problem was that the harder we hugged, the more ridiculous settling on a meaningful genre name became.


We also questioned our elders with adolescent conviction. We wrestled with Cage like we wrestled with our dad. We questioned taking tuition from so many would-be composers if there would never be enough jobs for them. We looked at the music we studied in the academy and found that the frame needed some adjustment.

Not to be left out, Frank J. Oteri and I interrogated each other. Once we launched a redesigned version of the site on our 6th anniversary, we had a little fun publicly debating our previously in-house-only arguments. Like any family, we continue to have these perennial disagreements—over everything from the value of negative criticism to the necessity of the Oxford comma. But ultimately, we are a team—which has translated into countless moments of shared high comedy and nail-biting anxiety (often simultaneously). For instance, when Frank got stuck in some epic traffic that year while trying to get back from a sneak premiere of Joan Tower’s Made in America, I headed uptown to cover his interview with Brian Ferneyhough with zero preparation aside from the list of questions Frank had relayed over the phone. Mr. Ferneyhough was incredibly gracious and understanding of the situation, and I remain grateful for his patience and generosity that day. Despite my trepidation, we ended up having a really great conversation! An education about music from the creators themselves—there’s really not a more illuminating path to take. 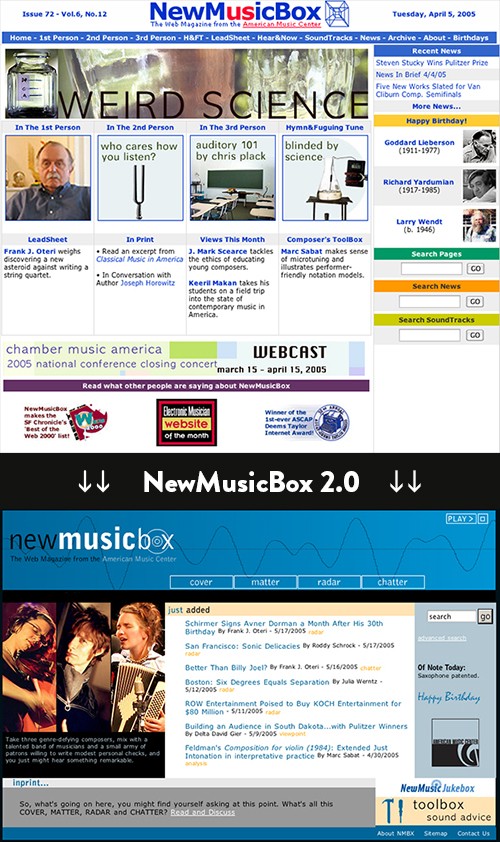 For all I learned that day, there were actually quite a few bits of advice and guidance on offer that year. In a time before Kickstarter, you used to have to do all the heavy lifting on individual fundraising campaigns yourself. And if you didn’t have your own lawyer on retainer, sometimes you had to tighten your tie, lint-roll your jacket, and play that role as well.
But it wasn’t all about administration, of course. That was just to keep fuel in the artistic engine and the lights on in the studio where experiments with extended techniques and microtonality could happen. There was advice on how to work well with a record producer and a look inside how our ears were working with our brains. Honestly, though, I might have gotten the most caught up contemplating the accordion’s various reed ranks and tone colors—fascinating stuff and I do not even play the accordion…yet.
And though it might seem as if all that technological excitement of 2004 fell off the radar, the questions at the intersection of music and digital delivery were actually getting much more complex as the novelty of what we could do careened into what music was worth and how we were going to pay for it.
On a personal note, The Friday Informer, a column I wrote highlighting the best of the new music internet, kicked off on September 30 that year. I would regularly spend my Thursday evenings with 60-some browser tabs open until May 2008, by which point social media made my delayed weekly endcap obsolete.